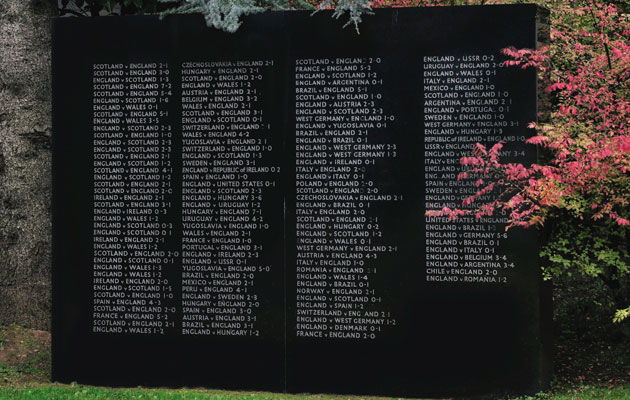 A huge sculpture made by Maurizio Cattelan which records every one of England’s defeats up until the 1998 World cup, has gone up for sale at Sothebys.

The granite artwork is expected to sell for £600,000 at auction.

Cattelan says the work of art is about “pride, missed opportunities and death”, lists every defeat suffered by England from their 2-1 loss to Scotland in 1874 to Romania’s 2-1 victory at the 1998 World Cup.

The piece is 2.2-metres high, three metres wide and 0.6-metres deep. It is just as well that the artist stopped in 1998. It is hard to imagine a room big enough to accommodate an additional 15 years worth of failure.

The piece was created in 1999 when it was exhibited in London. It will be auctioned off next week at Sotheby’s New Bond Street gallery in London.

“Carved into it are all the defeats of England’s national football team. I guess it’s a piece which talks about pride, missed opportunities and death,” said the artist, who is renowned for his satirical pieces.