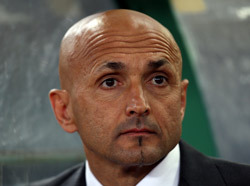 Chelsea’s search for a new manager suffered another setback last night when Roma coach Luciano Spalletti became the second Italian to distance himself from the vacancy at Stamford Bridge.

Spalletti has led Roma to runners-up spot and the Champions League quarter-finals in each of the past two seasons, but with his compatriot, Milan coach, Carlo Ancelotti, the 49-year-old has snubbed an approach from Chelsea.

His agent, Vlado Lemic, is understood to have held informal talks with Chelsea officials in Paris. However, Spalletti apparently feels he is not yet experienced enough to take on the job of managing a club with the expectations of Chelsea. He was also concerned that his lack of English would prevent him from fulfilling his duties satisfactorily.

Spalletti was was due to meet Roma officials yesterday to discuss his transfer budget for next season, although with the club’s parent company, Italpetroli, saddled with huge debts, the expectation is that the club will have to sell to raise funds for any incoming players. Despite the perilous financial situation, Spalletti has opted to stay with the club.

Chelsea will now turn their attention to the remaining candidates on their shortlist, with Portugal head coach, Luiz Felipe Scolari, still regarded as a strong contender, while the likes of Roberto Mancini, Frank Rijkaard and Didier Deschamps all have their supporters within Stamford Bridge.