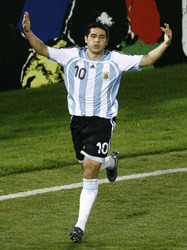 The agent of Argentina playmaker Juan Roman Riquelme, claims Tottenham Hotspur have made an offer for the player.

Villarreal are prepared to sell Riquelme after he spent the second half of last season in his homeland playing with Boca Juniors.

There has been interest from several clubs across Europe, but reports suggest Spurs have submitted a €15m bid.

Villarreal president Fernando Roig is considering the bid and Riquelme’s agent Marcos Franchi is waiting for an official response from the club.

“Despite that we haven’t been told anything officially, we know that Villarreal has received a very important offer from Tottenham and that the president Fernando Roig is analysing it,” Franchi told Radio La Red.

“They have to make a decision before August 31, otherwise Riquelme will stay at Villarreal as there aren’t any other serious negotiations.

“If nothing new appears I think that they should accept this offer as it is good for the club and the player.

“I don’t think that Riquelme would be useful for Villarreal without playing.

“It would be much more useful for them to sell him so they recover what they invested in him when they bought him.”