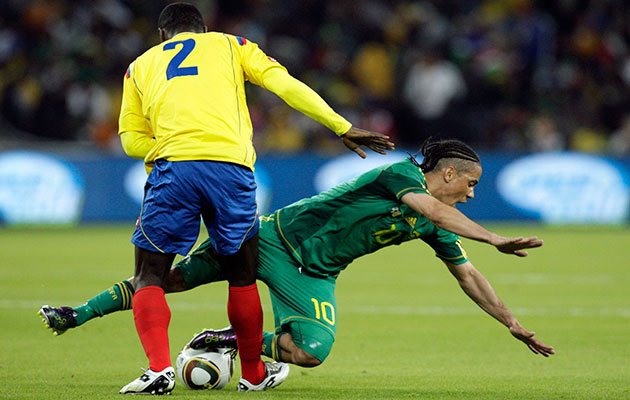 A six-year suspension from football imposed last October on Lindile ‘Ace’ Kika has been followed by bans of five years on Leslie Sedibe (and a fine) and two years each for Steve Goddard and Adeel Carelse.

The punishments arose out of a match-fixing scandal surrounding test friendlies played in South Africa on the eve of the country’s hosting of the 2010 World Cup finals. Mastermind was the notorious Wilson Raj Perumal on behalf of an Asian betting syndicate.

The matches concerned were World Cup warm-up games for the host nation’s national teams. They involved Thailand, Bulgaria, Colombia and Guatemala and were refereed by African officials contracted by an agency called Football 4U International. This was a front for Perumal.

South Africa’s 4-0 win over Thailand and 2-1 win over Colombia, in which all three goals came from penalties, were refereed by a Kenyan. A match against Bulgaria was officiated by a Togolese referee.

Chaibou was also nominated for South Africa’s final World Cup warm-up, against Denmark, but was replaced in the tunnel just before the team ran out because some other SAFA officials had become suspicious.

Administrative concern about the games did not emerge until almost two years later, in February 2012. Then Sedibe, who had been SAFA chief executive, said he had delegated responsibility to Kika, then SAFA’s head of national teams, for liaison with Football 4U International.

In March 2012 an inquiry was launched by the then FIFA security head Chris Eaton.

The report said Perumal had offered to arrange, and pay for, the friendlies as well as provide referees. The referees fixed the matches, according to the FIFA report, making dubious decisions on offsides and penalties. For SAFA to have delegated such match arrangements to an outside agency was a breach of regulations in itself.

South Africa’s government promised its own judicial commission of inquiry but FIFA objected that this implied government interference.

After a lengthy stand-off FIFA’s then ethics prosecutor Michael Garcia activated his own investigation in November 2013. Precisely a year later proceedings were opened which led to the original ban on Kika.

The fall-out from Perumal’s activities continues.

He was linked – among many other scams on behalf of Asian betting syndicates – with a major fixing scandal in Finland club football as well as a fake Togo team which played in Bahrain (when the BFA president was Sheikh Salman bin Ebrahim Al Khalifa, the current Asian confederation head and a FIFA vice-president).

The Zimbabwe Football Association also identified Perumal in its own 160-page report into alleged match-fixing on their national team tours to Asia from 2007-09.

Perumal’s name and connections have been linked, in the last fortnight with the latest Zimbabwe matchfix scandal whose tentacles appear to stretch into the South African PSL.

In a response to the latest bans Poobalan Govindasamy, chair of the SAFA ethics committee, said: “We are glad this matter has ultimately reached this stage . . . We have a zero-tolerance policy for any corrupt activity which impacts negatively on this beautiful game and for that reason we welcome strong measures against any individual who is found guilty of such offenses.”