Jerome Valcke, the sacked FIFA secretary-general, has been banned from all football for 12 years and fined SFr 100,000 which appears lenient considering the case against him.

The world federation’s ethics committee, chaired by German judge Hans-Joachim Eckert, punished the Frenchman after allegations of World Cup ticket dealing misconduct were exacerbated by abuse of travel expenses, the sale of TV rights and destruction of evidence.

Valcke, No2 at FIFA until being suspended last autumn, has thus crashed to earth for a second time. In 2007 he was removed as marketing director after being defined for telling lies to a United States court over the back-stabbing of MasterCard to enable FIFA to take up a sponsorship with Visa.

The latest shaming, over a range of issues which go directly to Valcke’s character, raises questions about the lack of judgment displayed by then president Sepp Blatter in re-hiring him as secretary-general in the summer of 2007 after what had been initially considered a sacking was revealed as mere ‘gardening leave.’

His misconduct also levels major concerns over his close relations, down all his FIFA years, with ex-CONCACAF president Jack Warner and former Brazilian supremo Ricardo Teixeira.

Both men are high on the FBI’s wanted list over the ongoing FIFAGate corruption investigation.

Swiss investigators checking out the 2018 and 2022 World Cup bid process and allied issues may also turn their direct attention to Valcke. Already Blatter is under criminal investigation over the ‘disloyal payment’ to UEFA president Michel Platini in 2011 which led to both men’s eight-year suspensions from football. 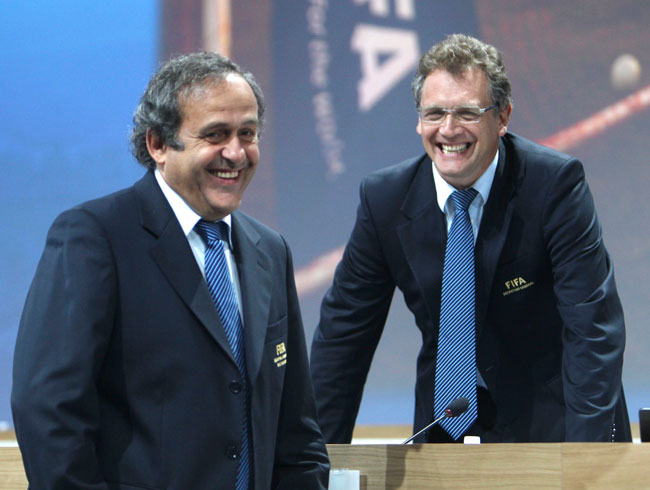 Valcke, former journalist and then sports marketing high-flyer, came under scrutiny initially after being suspended by FIFA following allegations by a friend of Platini that he [Valcke] had reneged on a private World Cup tickets deal.

Already, Valcke had become a FIFAGate target over a $10m payment made by the 2010 South African World Cup organisers to Warner in 2008. Valcke had effected the payment but claimed he was only obeying orders from the late Julio Grondona, then FIFA’s finance chairman.

Though Valcke had considered standing for president in succession to Blatter it was always far more likely that he would quit FIFA after the election on February 26.

He even signalled his impending departure at a news conference on the eve of the World Cup qualifying draw in St Petersburg in July. It is understood he was already negotiating the terms of his departure but had failed to reach agreement over his demand for a comprehensive legal indemnity.

Then, in September, the tickets scandal exploded. A Zurich company, JB Sports Marketing, claimed it had been misled by Valcke over a contract with FIFA to sell VIP ticket packages for the 2013 Confederations Cup and 2014 World Cup.

Valcke had been heading for Russia to attend events marking 1,000 days to the country’s staging of the 2018 World Cup finals when his charter flight was turned around in mid-air. He was ‘relieved of his duties’ which were taken over on an interim basis by finance director Markus Kattner.

On October 8 Valcke was suspended for 90 days by FIFA’s ethics committee pending a full investigation into allegations which, according to his lawyer, he always “vehemently” denied.

Early last month Valcke’s original 90-day ethics suspension was extended for a further 45 days during which he was formally sacked by FIFA. Ethics prosecutor Cornel Borbely sought a nine-year ban for Valcke but Eckert judged the offences so serious that he delivered a 12-year suspension plus the SFr 100,000 fine.

An ethics statement indicated that it was during the World Cup tickets investigation that other issues emerged. These included “travelling at FIFA’s expense purely for sightseeing reasons as well as repeatedly choosing private flights for his trips over commercial flights without any business rationale.”

Valcke thus “gained an advantage for himself and relatives . . . and caused considerable financial damage to FIFA, while his private and personal interests detracted from his ability to properly perform his duties as the secretary-general.”

Borbely also accused Valcke of attempting to grant TV rights for the 2018 and 2022 World Cups in the Caribbean “to a third party” for a fee far below market value.

Finally, with Bornely closing in, Valcke tried to delete files and folders of potentially incriminating evidence off his computers.

The professional tragedy for Valcke is that, without his commitment and persistence, neither the 2010 or 2014 World Cups would have been staged to the necessary standards in South Africa and Brazil respectively.