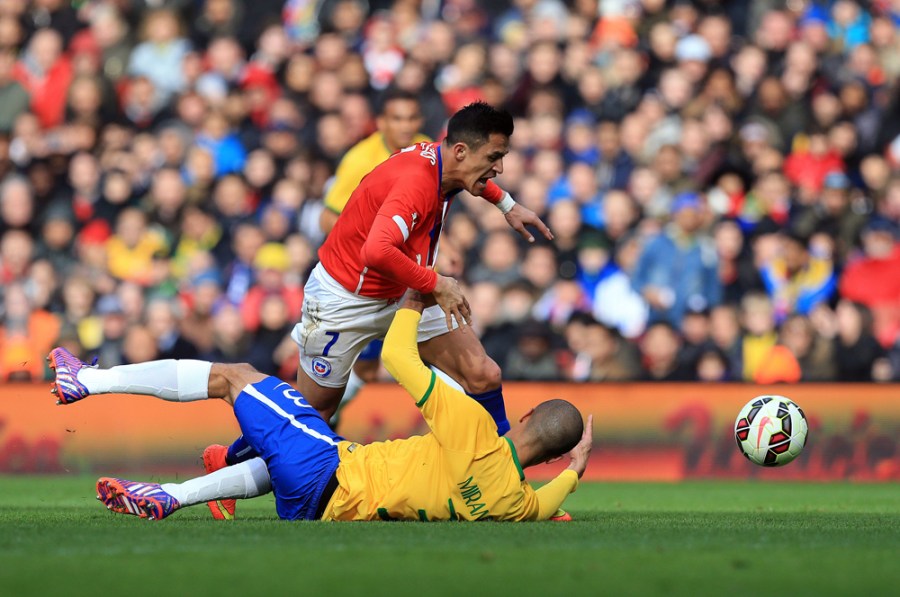 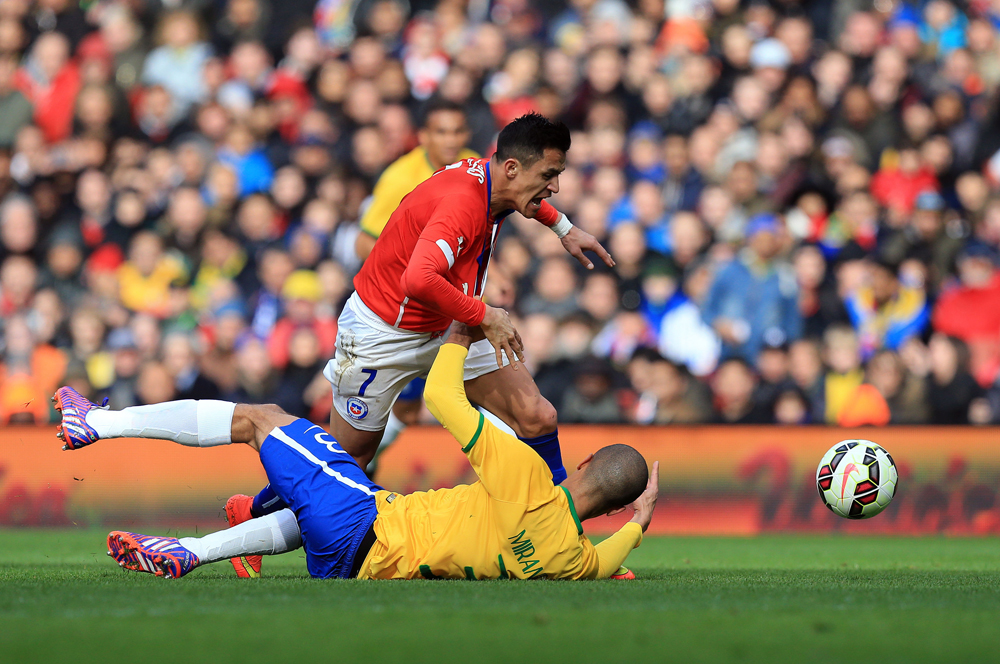 Even Brazil’s nationalistic TV Globo was embarrassed by the foul count of Dunga’s team in Sunday’s 1-0 win over Chile in London. As the statistics mounted up (Brazil committed 32 fouls to Chile’s 15) influential commentator Galvao Bueno made frequent references to the theme, while alongside him former World Cup final referee Arnaldo Cesar Coelho shook his head and Ronaldo referred to the practice of ‘tactical fouling’ – deliberately interrupting the flow of the game by giving away free kicks in midfield. It was an aspect of Brazil’s football that displeased many during last year’s World Cup – and which surely created the atmosphere in which Neymar was injured against Colombia and missed the fateful semi final.  And here it was again against the Chileans.
Its use was an unpleasant example of just how seriously Brazil take friendlies – especially when the coach is always looking over his shoulder worrying about his job security. Dunga was not a popular choice to take charge of the team, and, in his conception, the only way he can keep his job is to keep winning. Hence the competitive approach against Chile, and the bizarre scenes towards the end of Thursday’s 3-1 win away to France when he made five substitutions in the last seven minutes, protecting his lead as it if was a World Cup final.
Friendlies are, these days, a notoriously unreliable guide.  His team have now won eight in a row – but it is worth recalling that the Luiz Felipe Scolari side went into the World Cup on a run of nine consecutive victories, with 30 goals scored and just two conceded. The real test, of course, will come with the next cycle of competitive matches, which kicks off with the Copa America in June.  The good news for Brazil, in addition to the emergence of Roberto Firmino at centre forward, was the display against France. With a switch from 4-2-3-1 to 4-4-2, with Neymar more free to roam, the team bore a passing resemblance to the World Cup winning side of 1994 – not especially spectacular, but compact, competent and capable of occasional flashes of inspiration.
There was less to celebrate in the victory over Chile, where the changes made in midfield clearly took their toll. A central midfield duo of Fernandinho and the ploddingly ordinary Souza were never going to offer much elaboration, and Philippe Coutinho was clearly unhappy on the left of a 4-4-2, while Luiz Adriano up front did not take advantage of what may prove to be his final opportunity.

Argentina, meanwhile, also have a dilemma in their attack. What is coach Gerardo Martino doing with Carlos Tevez?
The Juventus striker was never called up by previous coach Alejandro Sabella, who lined up his team with both Gonzalo Higuain and Sergio Aguero.  Under Martino it now seems that the two of them are fighting for one place – along with Tevez, recalled for the first time since the 2011 Copa America. The presence of Tevez, now 31, means that there is no place in the squad for the coming generation, the likes of Mauro Icardi, Luciano Vietto and Pablo Dybala.
With idol status in Argentina, Tevez has become a controversial figure in the national team. First choice in the troubles 2010 World Cup qualifiers, he managed one tap in goal and two first half red cards, and lost his place until the World Cup in South Africa, when then-coach Diego Maradona could not resist the temptation to include him and unbalanced his side as a result. A year later coach Sergio Batista revealed that he had suffered political pressure to pick Tevez for the Copa America, which Argentina hosted. The team got off to a bad start in the competition, and Tevez made things awkward for himself in the dressing room by moaning to the press about the position he was playing.  The quarter final against Uruguay went to a shoot out and he missed the vital penalty.  Amid rumours of a fall out with Lionel Messi, Tevez did not reappear in the reign of Sabella – only to be brought back by Martino late last year.
He was then given half an hour in both November’s games, against Croatia ad Portugal, and played all but the last 12 minutes of Saturday’s 2-0 win over El Salvador.  And in these three games he has done little – on Saturday, playing in Messi’s position, there were a few long range shots but none of Messi’s capacity to dribble or pass opposing defenders out of the game.  The international record of Tevez now reads at a very disappointing 13 goals in 67 games.
So what happens now? Does Martino feel that he has given Tevez a chance and can afford to drop him without walking into a political controversy? Or is he still in the frame for the Copa America?  Tuesday’s game against Ecuador may shed some light on the situation.  Presumably Aguero will start – and there would seem little doubt that he is Messi’s preferred front partner. But it will be interesting to see if Tevez is given a chance – and also fascinating to observe the performance of Argentina’s suspect defence against the pace of the Ecuadorian wingers.