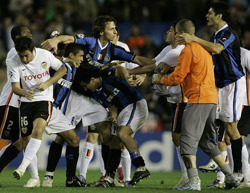 Uefa has reduced the suspensions imposed on Inter’s Maicon, Ivan Cordoba and Valencia’s Carlos Marchena following the brawl at the end of the clubs’ Champions League encounter at the start of the month.

Maicon had his six-match ban reduced to three games, Cordoba saw his ban cut from three to two, whilst Marchena saw his four-match penalty halved.

Nicolas Burdisso – whose nose was broken by David Navarro at the end of the match, failed to have any of his six-match suspension lifted. Similarly, Julio Cruz’s two-match ban remained intact.

Navarro has seen his seven-month suspension from world football, reduced by one month.