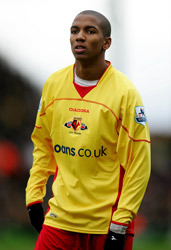 Watford striker Ashley Young is poised to join Aston Villa in a deal initially worth £8m.

The fee could eventually eclipse Villa’s record of £9.5m but O’Neill said: “Is it a risk? Not to me.

“He has got great touch and a wee bit of pace too, he can play on both flanks and alongside the centre-forward as well. I am very excited about it.”

Young is expected to make his debut in Villa’s Premiership encounter with Newcastle at St James’ Park on 31 January.

“I think he has got enormous potential and I think he will fulfil that,” O’Neill added.

“He is a really talented player. I have seen a lot of him and I am going to back my judgement.

“My own view is he will prove terrific value. He is only a young fellow and I have no doubt at all he is good enough.

“I have been really impressed with him and his maturity. I have seen Watford loads of time this season. When they see me coming, they probably have been thinking ‘oh, no, not again!’.

“You think along the lines of ‘will somebody be of value over the next four or five years?’ and you base your decision on that. I believe Ashley is capable of great things.”

O’Neill also said he was unconcerned about spendin g so much money on an unproven player.

“I have always been pretty careful with money, primarily because the clubs I’ve been involved with have not really had that much,” said the 54-year-old Villa manager.

“It will be the most money I’ve spent but at my age I’ve earned the right to do that. Chelsea boss Jose Mourinho and Manchester United manager Sir Alex Ferguson can spend and it’s all right.

“Am I supposed to stay down forever?”

Young’s arrival comes in the wake of Villa signing Lyon striker, John Carew, who agreed a three-and-half-year deal with Milan Baros moving to the French club.