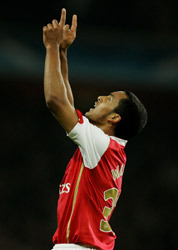 Theo Walcott has signed a new long-term contract with Arsenal.

The 20-year-old England international joined the Gunners from Southampton in January 2006 and has now agreed improved terms with the North London side.

“I’m absolutely delighted to have signed a new long-term contract. I’m so happy here and just want to say thanks to everyone who has helped me get to this point in my career,” he told the club’s official website.

“Together with the belief of my team-mates, the boss and everyone on the staff, everyone has got behind me here at Arsenal which is brilliant.

“It’s fantastic to work with the best manager in the world and play at Emirates Stadium, which is an unbelievable place to play in. I just want to continue playing my football at this club and look forward to many successful seasons ahead.”

Arsenal manager Arsene Wenger believes that there is still more to come from the gifted young player.

Wenger said: “We are absolutely delighted that Theo has committed his long-term future to Arsenal Football Club. Theo is an intelligent player with amazing ability and speed, and has developed extremely well this season.

“At still only 20 years of age, Theo has huge potential for the forthcoming years and we are all looking forward to see him grow even more in an Arsenal shirt.”