Back in the game

Gordon Strachan has accepted that his career as a top flight football coach is effectively over, by agreeing to become the new manager of Scotland.

In a straw poll of Scottish managers who have yet to manage the national team, Strachan picked the shortest one and replaces. Craig Levein, who was sacked in November.

Strachan has signed a contract that will cover the remainder of the current World Cup qualifying campaign and the Euro 2016 qualifiers, although he’ll be bucking the trend if he survives in the post that long.

“I’m very proud but also my family are proud. The time is right for me to be able to take a job like this,” he said after his appointment was announced.

“There’ll be rough times but I hope there’ll be good times too.”

True, Estonia are in town for a friendly match next month and then there’s an eminently winnable World Cup qualifier at home to Wales in March. It could soon be the start of a golden age, before reality intrudes with the visit to Serbia four days later.

“Every club you go to there’s always challenges but this is the first time the challenge is on behalf of a nation.

“If you can be successful you can make a nation happy and make a nation proud and that is the priority for me to be able to do that with help from other people.

“I really want the squad and the staff to give something back to the country and the fans who support us because the fans are probably more famous than the squad now.” 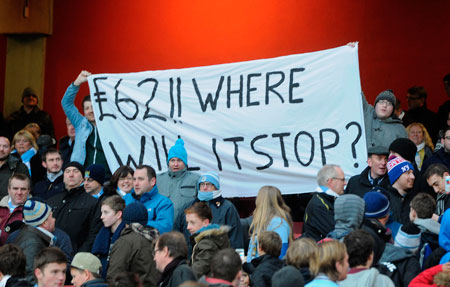 Manchester City fan Richard Taylor’s one-man protest about the cost of match day tickets at Arsenal’s Emirates stadium on Sunday, was cut short by an officious steward who reported him to the police for refusing to remove the banner.

Taylor, one of the intrepid band of Manchester City supporters prepared to fork out £62 for the privilege of watching the Premier League encounter, decided to make a peaceful protest about the expense of wathching his team his by unveiling a banner emblazoned with the words “£62!! WHERE WILL IT STOP?” across it.

“Ticket costs are becoming a big problem for fans, especially at away games, and I thought that, by making a banner, we’d get the issue a bit of publicity,” he told the Guardian.

“We took it into the ground and it seemed to create a bit of a stir; people were taking photographs of it. Then, within a couple of minutes, a steward walked over. He told me: ‘I agree with what you’re trying to say but I’m under strict orders from my boss to take it off you.'”

Taylor reminded him of the right to peaceful protest while also questioning what harm the banner could possibly do.

“It used no offensive language and there had been no complaints about it,” he said. “But the steward replied that it was against ground regulations and if I didn’t give it to him he’d have to get the police.”

Taylor again refused to surrender his banner, which led to the involvement of the police who had nothing better to do on a Sunday afternoon than confiscate a harmless banner questioning the exorbitant cost of attending a football match.

“Suddenly two policemen were on one side of me and two on the other,” Taylor continued. “They told me to hand it over or be escorted out of the ground and arrested [for a breach of the peace]. Part of me didn’t want to give in but I didn’t want to miss the game and, in the end, I decided it wasn’t worth the hassle so I let the police take it away.”

Quizzed about the incident, an Arsenal spokesman said the banner had been removed because “it impeded the view of supporters and for no other reason”.

Oh really? Even though the banner was removed before the game had kicked off?

Do the right thing

Coincidentally, and as further conformation that when a butterfly flutters its wings in the jungle then some jobsworth in the FA will want to punish it for doing so without the permission of the referee; the linesman from Sunday’s match who suggested that City’s Joleon Lescott thank the out-of-pocket travelling fans for their attendance, has been dropped from duty for tonight’s match between WBA and QPR.

John Brooks, one of the linesmen, was caught on camera urging Lescott to applaud their fans. “They’ve paid 62 quid over there; go and see them,” he said.

His reward for encouraging a player to acknowledge the people who pay his wages, is removal from duty for tonight’s FA Cup third-round replay.

‘If we’re going down, we’re not going down without an overdraft,’ seems to be the message from QPR boss Harry Redknapp, who has finally persuaded the club’s owner, Tony Fernandes, to bring out the cheque book and start spending his hard earned millions. That’s the problem with the money ploughed into football clubs by wealthy owners: hard earned, easily squandered.

Few managers in the history of football are quite so adept as Redknapp when it comes to spending other people’s money; the results, as supporters of Portsmouth and Southampton will testify, are not always petty.

QPR splashed out £8m on Remy within hours of the Marseille striker turning down Newcastle, with a further £7m for Rennes’ midfielder M’Vila after watching him in action at the weekend.

Struggling Newcastle had agreed a fee with Marseille and the player is believed to have negotiated a £70,000-a-week deal. The lure of near certain relegation with QPR was too strong to resist though.

M’Vila, 22, has 22 caps for France but he is currently serving a two-year ban for breaking a curfew and going out clubbing while on international duty. Whether London is the best place for him to continue his rehabilitation, remains to be seen.

Both players will go straight into the Rangers team to face West Ham at Upton Park on Saturday.

When Two twits go to war…

Joey Barton has apologised for his part in a heated spat with former Manchester City team-mate Dietmar Hamann on Monday night.

The QPR midfielder, currently on loan with Marseille, tweeted: “I’ve slept on it. I have no right to question a man I hardly know. I must, therefore apologize for my part in last night’s heated exchange.”

The pair exchanged over 50 increasingly acerbic tweets in an astonishingly candid exchange sparked by Hamann’s jibe at Barton for revealing that his Marseille team-mate Loic Remy was set to join his parent club Queen’s Park Rangers.

The former German international started the ball rolling by criticising Barton for ‘getting involved in club politics’ and told the Liverpudlian that he should simply be grateful to all his club’s chairmen for paying his wages.

Both men have since deleted the tweets, but anyone wishing to find the full, frank exchange of views, won’t have to search too far.

It’s a lively, but puerile confrontation, with Barton in particular showing that when it comes to verbally abusing a former professional, he has few peers in the modern game. Once sent to undergo anger management therapy, it may be about time for the midfielder to take a refresher course.

Among terms he used to describe Hamman were “maggot”, “washed-up cokehead” and “Tourette’s-face”. Charming!

Despite a catalogue of failures in football management over the course of the past 10 years, Sven Goran Eriksson popularity among slightly desperate club chairman remains undiminished.

I guess for any football supporter, if you wait long enough, Eriksson will one day be linked with your club, and if you’re really unlucky, he will join the coaching staff.

The Swede is doing just that at second-division, 1860 Munich, in order to help current coach Alexander Schmidt.

“Yes, we have an agreement that Sven-Goran Eriksson will join our coaching staff,” the club’s board chairman Otto Steiner told reporters on Tuesday morning after an all-night meeting at the club offices.

“Alexander Schmidt will remain our coach.”

Although he has kept a low profile in Europe in recent months he has not flown completely under the radar. On 3 September 2012, Eriksson was unveiled as the Technical Director of BEC Tero Sasana, a team in the Thai Premier League.

On 17 November 2012, it was reported that Eriksson was in talks with Valerenga about the possibility of taking over. In December, negotiations between Eriksson and the Football Federation of Ukraine, who had offered him the position of head coach of the Ukraine national team, came to nought.

Where next is anyone’s guess, but don’t expect to see him settling in Munich.

It’s only a friendly match but Carlos Bacca’s remarkable effort for Club Brugge against Feyenoord is worthy of Goal of the Day status.

“My memories from English football could not be better. It was my first experience outside of Portugal – I was still a very young coach when I left Portugal to go to England. But there couldn’t be a better place to go. In England you feel the real passion for the game. You also don’t feel what we feel in almost every other country which is the passion for clubs. In England, it’s not just about passion for clubs, it’s mainly about passion for football – and you feel it…But I know that one day I will come back because English football means a lot to myself.”

Jose Mourinho confirms he will return to England.

Bayern Munich have declined to comment on speculation about a possible deal with former Barcelona coach Pep Guardiola.

“Unfortunately we will not be commenting on these rumours,” a club official told Reuters when asked about reports that the Spanish coach, who has taken a year out, was close to a deal with the Bavarians.

“I have never commented on rumours – whether they came from Italy or England – and I will stick with that today as well,” Bayern CEO Karl-Heinz Rummenigge told reporters when asked about the reports on Guardiola.

Which hardly qualifies as a denial and must make current coach Jupp Heynckes wonder about his own position.

Bayern are top of the Bundesliga with a nine-point lead after 17 matches and face Arsenal in the last 16 round of the Champions League when the competition resumes next month.

How the mighty have fallen

Yordan Letchkov, the scorer of arguably the most famous goal in the history of Bulgarian football, has been jailed for two years for corruption.

Best remembered for scoring the goal that knocked holders Germany out of the 1994 World Cup quarter-finals, Letchkov had since moved into local politics.

But his time as the mayor of his hometown Sliven came to an abrupt end in April 2010 when he was removed from office for official misconduct. He later returned to his post, but has now been sentenced to two years imprisonment after he was found guilty of tax irregularities.

The charges related to a water and sewarage deal, which saw the city left considerably out of pocket.

Here he is in happier days.