Shanghai Shenhua fans boycotted a friendly against Manchester United to protest at the match being played in the middle of the Chinese league season.

An online campaign started by Shenhua fans had urged the club’s supporters to snub the event.

A post from one fan circulated on China’s weibos read: “If you are a real Shenhua supporter, cancel any plan you have to attend this game against Manchester United.

“Let the sponsors see that this game, which reeks of business and money, should not be scheduled in the middle of our league season.”

“I don’t think Man United would agree to play Shenhua in the middle of the English Premier League season – so neither should we,” Shenhua fan Ma Haiping told AFP. “I think this is a game about business, I think it’s totally boring.

Indeed it is. It is worth pointing out, though, just to counter any illusions Chinese fay have about English clubs, that Man United would fly to the moon in the middle of the English Premier League season, provided the money was right.

Coincidentally, a number of Manchester United supporters have been calling for a similar fan boycott of United home games, in protest at the Glazer family’s ownership of the club. But, week in, week out, they still turn up in their thousands at Old Trafford. Happy to perpetuate a regime that leeches money from the club. 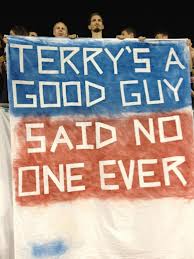 John Terry is unable to escape his demons. Even 5,000 miles away from home, he encounters reminders of his unpopularity.

Supporters at the MLS All Star XI v Chelsea game, reminded the defender that his reputation precedes him.

Red faces all round as the Olympics kick off with an embarrassing mix-up of flags.

The opening day of the London 2012 games (which doesn’t officially open until Friday) was overshadowed by a row over the use of the incorrect flags. As the North Korean players were being introduced before their match against Colombia, South Korean flags were mistakenly displayed in the video package.

Understandably, the North Koreans were unhappy and threatened not to play.

Speaking after the match, North Korea’s coach Sin Ui Gun said: “Our team was not going to participate unless the problem was solved properly…

“Unfortunately it took some time later for the broadcast to be done again properly and we made the decision to go on with the match.”

The mix-up was attributed to human error and to appease the North Korean team apologies from the great and the good was issued. Even Prime Minister David Cameron, who will be hoping a smoothly-run Olympics will do wonders for his flagging poll ratings, was forced to speak about the incident.

“This was an honest mistake, honestly made, an apology has been made and I’m sure every step will be taken to make sure these things don’t happen again,” he said.

“We shouldn’t over-inflate this episode. It was unfortunate, it shouldn’t have happened and I think we can leave it at that.”

Elsewhere in the Olympic bubble, Team GB sent out an email referring to the Great Britain women’s football team as “England”. Furthermore, Swansea City midfielder, Joe Allen (of whom, more later) was pictured in the official Team GB programme with his nationality listed as English despite being born in Camarthen in Wales.

I don’t know about running the biggest sporting event on the planet, but you wouldn’t trust these people to organise a drink-up in a brewery.

Sticking with the Olympic theme, British Olympic Association chairman Lord Moynihan has criticised FIFA president Sepp Blatter for suggesting Gareth Bale could be banned from playing for Tottenham during London 2012.

The threat from Blatter came after Bale pulled out of the Games with a back injury only for the winger to take part in a pre-season friendly for Spurs – two days before Great Britain’s opening game against Senegal.

Moynihan said: “I understand the response from some football fans who were hoping to see him play as part of Team GB.

“My view is different.

“I welcome the fact that he has returned from injury earlier than expected.”

He added: “I don’t agree with Sepp Blatter’s comments about banning him.

“I think Sepp Blatter needs to get closer to Team GB.”

Considering he’s virtually persona non grata throughout the UK, I’m not sure how that’s going to happen. Besides, on this one issue, rather like the stopped clock, Blatter has called this one right.

Chelsea’s chances of signing Napoli striker Edinson Cavani have soared after the Uruguayan’s wife was mugged on the streets of Naples.

Cavani’s wife Maria Soledad was said to be ‘badly shaken’ after her Audemars Piguet watch, worth £14,500, was stolen by two men as she walked to her car. The mugging comes shortly after the couple’s home was burgled in what was the latest in a string of break-ins at the houses of Napoli players.

To make matters worse, Cavani himself was in the UK at the time preparing for Uruguay’s Olympic campaign.

Cavani’s agent Claudio Annelucci said: “It is not a good moment, but they are trying to get over. She has left Naples to join Cavani. It is difficult to get used to the idea that these sort of things can happen to you. It is true that incidents of this type can happen to anybody, but the truth is they happen too often.”

One potential stumbling block to a move to England is Cavani’s transfer fee, with Napoli owner Aurelio De Laurentiis rating the player at €100 million.

“Cavani is not for sale, and I’ve never had any contact from Juventus,” he said. “But if I get an offer from Torino, or anywhere else, of €100 million…”

Juventus defender Leonardo Bonucci could face a three-year ban for his role in the Scommessopoli scandal as the Italian FA (FIGC) has announced that the centre-back will face charges of sporting fraud.

The 25-year-old is believed to have been involved in fixing the result of matches during his spell at Bari in 2009-10. He is one of 44 players indicted for their role in the scandal.

Arguably, the highest profile person involved in the case is Juventus coach, Antonio Conte. Although not implicated in the match fixing itself, Conte is accused of failing to report two attempts of match-fixing during his time at Siena. For this lesser charge, Conte could be fined or suspended – with a ban, according to some sources in Italy on Thursday, estimated at around the six-month mark.

Swansea City have confirmed a number of Premier League clubs are interested in signing Joe Allen – but denied a bid from Liverpool has been accepted.

A Swansea statement read: “Swansea City can confirm that Liverpool have expressed an interest in Joe Allen, despite a written agreement with Liverpool not to approach any players within the 12-month period of former manager Brendan Rodgers leaving for Anfield.

The club is said to furious that details of Allen’s contract have been leaked to the media, including details of a £15m release clause should any of the ‘big five’ of Manchester United, Manchester City, Liverpool, Arsenal or Chelsea make bids.

For the sake of accuracy and noting Liverpool’s inclusion on the list, that should of course be a ‘big 8’.

Although, Rodgers agreed in writing not to bid for any Swansea players for at least 12 months, there is a loophole. Should another club try to sign Allen and Swansea accept their bid, then the agreement becomes null and void – allowing Liverpool to make an offer.

France winger Jeremy Menez has apologised to the French Football Federation for his behaviour at Euro 2012.

The 25-year-old was accused of insulting the referee as well as being involved in a row with his captain Hugo Lloris as France were beaten by Spain in their quarter-final in Donetsk.

He faces a disciplinary hearing on Friday and he has decided to get his apology in early.

Menez told L’Equipe: “I sent a letter of apology (to the FFF). I apologised for my absence and for the accusations made against me. I am eager to turn the page.

“It’s annoying to have to face the committee – it is not good for the image. But I am making, and will make, efforts to improve myself every day.

“The story with Hugo, this was not really anything.

“It is something that exploded when there was nothing at all. In any case, I did not insult him. He himself said in L’Equipe that there was no problem between us.”

The combination of fasting for Ramadan and the need for doping control has created a problem for a pair of Moroccan men’s players at the Olympics.

Coach Pim Verbeek said two of his players found it “more or less impossible” to provide a urine sample after the team’s 2-2 draw with Honduras in Glasgow on Thursday.

The game was played at noon, and the players had not had anything to eat or drink since 2:30 a.m. To be honest, it’s a miracle they were able to play at all.

Observant Muslims abstain from food and water from sunrise to sunset during Ramadan.

Verbeek says nine of his players are observing the Muslim fasting month. The length of the days in Scotland are not helping, as it means they are eating from 9:30 p.m. to 2:30 a.m.

“I am eager to get back into the game, I am looking to get back into football management, but I am in no hurry. Come November, December time, clubs will panic if they are down the bottom. No club can afford to drop out of the Premier League next season with so much money coming in next August. With each club getting anything between £60 million to £90 million there is too much at stake.”

Harry Redknapp, the ambulance chaser, is confident his services will soon be in demand.