The fallout from Argentina’s disappointing Copa America campaign has finally claimed coach Sergio Batista. Following a meeting on Monday with the Argentine Football Association, Batista agreed to relinquish his post.

“The national teams commission has decided to rescind the contract,” the AFA spokesman Ernesto Cherquis Bialo said. “Batista wasn’t sacked. He put his future as the head of the national team up for consideration by the executive committee.”

So, he neither jumped, nor was he pushed, but was encouraged to fall.

News of Batista’s departure came just three days after he expressed his desire to stay, and six days after Humberto Grondona, sub-director of team affairs at the Argentine Football Association and the son of AFA president Julio Grondona, said his job was safe.

It’s fair to say that Grondona, whose time in charge of the AFA stretches all the way back to the reign of the chain-smoking Cesar Menotti, is unlikely to be swayed by the results of an internet poll.

About 60,000 fans gathered in the Centenario stadium in Montevideo to welcome the Uruguay’s victorious Copa America side on Monday morning. Thousands more thronged the route to the stadium as the team bus made its way from the airport. 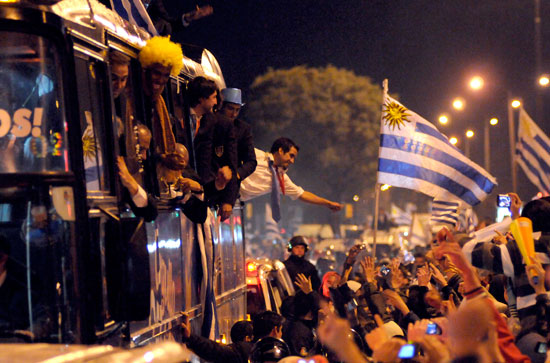 Diego Forlan, who scored two goals in the 3-0 victory over Paraguay in Sunday’s final, took this footage of the players celebrating.

FIFA, who will soon begin testing the viability of a number of goal-line systems, have blocked Arsenal from using the technology in this weekend’s Emirates Cup.

Gunners’ boss Arsene Wenger asked for permission to use the technology during this weekend’s friendly matches against Boca Juniors and New York Red Bulls, but FIFA turned down his request.

Wenger said: “You need permission to use it and we didn’t get it.   I think they do not want to start to have a different set of rules here and there and I understand that.   The good news is they are open to it and it looks like in the next World Cup we will have it.

Wenger, who has long been an advocate of utilising technology, is hopeful that the goal-line systems will just be the start of a technological revolution within the game.

“I would like to use it for more than the goal-line but it’s a first step,” he said.

Although Gulf officials have refrained from commenting on FIFA’s decision to impose a life ban on Asian football chief,  Mohamed Bin Hamman, an indication of the mood within the Middle East can be gauged by reading some of the region’s newspaper editorials.

The Abu Dhabi-based National newspaper set the tone, by calling FIFA an “ethical Neverland” and an “assembly of venal, conniving, self-perpetuating Old Boys who have their boots on the neck of the beautiful game.”

Bin Hammam was “the Arab Spring (for) world football,” the paper continued, referring to a wave of uprisings against autocratic rulers across the Middle East. “His ideas resonated. They excited.”

Which is all very well, but any attempt to portray the Qatari as a new broom within the organisation, is doomed to failure when you remember that he has been a FIFA executive member for the past 15 years. To put that into some kind of perspective, Bin Hammam’s intimate involvement with the game’s governing body, predates Sepp Blatter’s election as FIFA president.

Showing Mario Balotelli how it should be done, Stefan Ishizaki’s cheeky back heel secured the points for Elfsborg against Djurgarden.

Speaking of Balotelli, his Manchester City team mate, Nigel de Jong, has been advising the Italian to mend his ways.

“It is frustrating, and he has to iron out those issues otherwise it will be a waste of his talent. He has to realise that now,” said the Dutch midfielder. “All his team-mates are here to help him but he’s his own person and he is the only one who can change his ways.”

In terms of role models, I’m not sure De Jong is the first person I’d seek advice from. For those of you with very short memories, here’e his memorable contribution to last year’s World Cup final.

And here, three months later, having ‘ironed out those issues’, he welcomes Hatem Ben Arfa to English football.

Grim news for Turkish bookmakers comes with the decision to postpone the start of the new season, because of the ongoing match-fixing investigation. The Turkish federation decided on Monday, to delay the start of season – which had been set to kick off on August 5 – until September 9.

Meanwhile, in a further twist to the saga, authorities are also looking into the suspicious movement of Fenerbahce shares and those of other clubs on the Istanbul stock market last season.

Player of the season

Lionel Messi, Xavi and Cristiano Ronaldo have been named on a three-man shortlist to contest the inaugural UEFA Best Player in Europe award.

The shortlist is dominated by footballers playing in Spain and specifically those representing European champions Barcelona, who contribute four of the top ten

It’s the story that keeps on giving, as Mohamed Bin Hammam vows to fight to clear his name following his life ban from football. Step forward his parter in crime, Jack Warner; a man for whom the term ‘with friends like these…’ might well have been invented.

Warner, who resigned from all football duties after being implicated in the cash-for-votes scandal that brought down Bin Hammam, has warned of further fallout from the scandal.

A few weeks ago, the former head of the CONCACAF federation threatened to unleash a “tsunami’ of revelations about FIFA, but to no one’s great surprise, his revelations had about as much power as a dripping tap. Now, though, he suggests that further revelations are imminent.

If you have a large pinch of salt handy, now’s the time to take it.

The club’s general manager Yury Belous said the 45-year-old Stoichkov will be in charge of all of the club’s sporting projects.

“Every club project to do with sport will be Hristo’s (Stoichkov) responsibility,” Belous said. “He also will be responsible for the club’s staffing policy.”

Let’s hope Stoichkov does a better job with the playing staff than he managed when he was in charge of the Bulgaria national side. Then, several players, including two captains, quit international football after falling out with the temperamental coach.

Stoichkov, like Diego Maradona, Bryan Robson, and many others, is further proof that great players do not automatcally make great coaches. They just think they do.