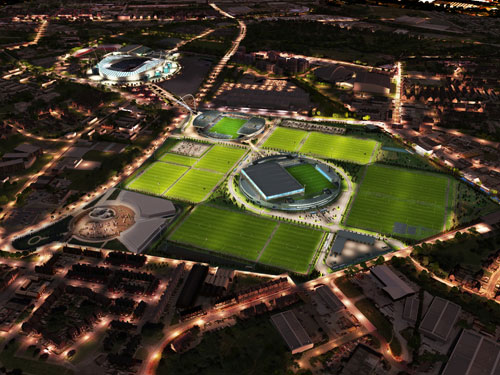 Manchester City have unveiled the plans for a stunning new training centre and academy, across the road from the Etihad Stadium.

The plan will see the first team move from their Carrington base, and the academy shift from Platt Lane, and come together in a 80-acre site in Openshaw. It will, at least when Carlos Tevez leaves, be like one big happy family living together under the same roof.

The aim, is for City to reverse their lamentable recent record in nurturing their own players. Inevitably, when it comes to producing home grown talent, Barcelona provide the template and City have sought advice from the European champions.

“Barcelona are a great role model and we have spent a lot of time there and have a great relationship with them,” said chief football operations officer, Brian Marwood.

“That would be the obvious thing, to point to and say: ‘They’ve done it right’.

“In the last Champions League final, they had eight players that were home-grown, which is an incredible statistic.”

In contrast, City have brought thorough just one player in the past ten years.

“It’s one thing building with bricks and mortar, it’s another to be able to develop young players,” he said. “I find it incredible when I look at the size of Manchester and the outlying areas, that we’ve only had one player, in Nedum Onuoha, who’s come through from the age of 10 or 11.”

Given the way the club has spoken of Onuoha’s mother I’m surprised they’re citing him as one of their success stories.

Cesc Fabregas has confirmed he has received an apology, retraction and damages after Sport magazine published an article claiming the Barcelona midfielder said he left Arsenal because he feared he would never win anything with the club.

Fabregas wrote on his official Twitter account: “Got the apology and retraction from that magazine that made up an interview about me. Can’t believe some journalists.

“I will also get … damages that I will give to charity. Hope it teaches them a lesson. I would NEVER say a bad word about Arsenal Football Club.”

A statement from Sport said: “On 16 September 2011 we published an article described as an interview with Cesc Fabregas. In fact, there was no actual interview (the player was speaking at two press events) and Fabregas did not say the words attributed to him, including and in particular about Arsenal.

“We were unaware of these matters when we published the article which was written by a freelance journalist. We apologise profusely to Mr Fabregas for any damage caused.”

So, the biggest scoop of the season and not only did the interview not even take place, but no one thought to check the veracity of the quotes? What was it, work placement day at Sport?

Turkey has adopted a novel approach to the problem of football hooliganism.

Turkish clubs whose fans are involved in crowd trouble now face having all males over the age of 12 banned from their grounds as an alternative to playing games behind closed doors. Women and children under 12 will be allowed to attend.

The Turkish Football Federation said: “After this decision, which is a first in world football, there will be no silent and unexciting games played without spectators. The change will make teams remember the beauty and values of football.”

Anyone who has ever attended a schoolboy international and been exposed to the eardrum-bursting screams of the young supporters present, may beg to differ.

Brazilian wonderkid Neymar has moved to quell the speculation about his future by confirming that he will be staying with Santos until at least the 2012 Olympic games.

The 19-year-old had been linked with a move to Real Madrid and there have reports claiming he has already agreed a deal with the Spanish side.

“It has already been decided,” he said at a news conference. “I won’t leave Santos in the next transfer window, I will stay until the Olympics. I have not reached a deal with any club.”

“I am happy here and I have no reason to leave. To be happy is what is important.”

Anzhi Makhachkala continue to be linked with the great, the good and the past-it.

Andrea D’Amico, the agent of Milan midfielder Gennaro Gattuso, has said that the Russian club are still closely monitoring his client.

“Anzhi were interested in signing him before and they still want him. There are no new developments at the moment though,” D’Amico was quoted as saying by Sportitalia.

“We will talk with Milan and see what happens. He’s been an Milan player for quite a while now and we have always been able to agree terms. We will soon talks to [Adriano] Galliani and find out what his plans are.”

Other players reported to be linked with a move to Dagestan are two members of England’s (G)Olden Generation, Steven Gerrard and Frank Lampard. The pair, whose inability to play together has been evident to anyone who hasn’t managed the England team in the past ten years, are reported to be targets for Anzhi.

Gerrard and Lampard have become the invisible men at their respective clubs. Gerrard at Liverpool, by virtue of a longstanding groin problem; Lampard at Chelsea, by virtue of playing most games.

Kennedy Igboananike produced a fine run from deep to score the only goal of the game in Djurgarden’s 1-0 win over AIK.

Attendances may be in decline, playing standards may not be what they once were, but reports of the demise of Italian football may well have been exaggerated. The new TV deal for Serie A shows that there is still a sizeable demand for the product even if people aren’t prepared to leave the comfort of their armchairs to watch it.

Serie A has accepted bids for its live broadcast rights for the next three seasons worth €829 million per season. The fee represent an increase of around 5% on the value of the same packages in the current deals. With the international rights, the rights to the Coppa Italia and non-exclusive new media and local television rights to be sold later this year, the league is well on course to meet its target of €1 billion per season.

That’s roughly twice as much money as clubs in Germany and Spain will receive this year and not far short of the amount that clubs in the Premier League, can expect.

“We’re seeing a trend for the purchase of low-level clubs and the movement of players and the trafficking of players,” he said, adding that this happened mainly in “less wealthy” countries.

Eaton said the approaches to players or referees would often start with a gift.

“The next time he plays, the same person will give him another €1,000 — for some of these players, we’re talking about third or fourth division, it’s more than they would make for the game.

Wouldn’t it be cheaper to just sign Fernando Torres and tell him to play his normal game. 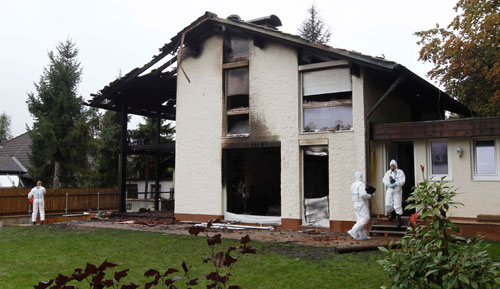 Bayern defender Breno had a lucky escape when fire destroyed his home in Munich.

The 21-year-old Brazilian is said to have suffered from smoke inhalation, but thankfully his injuries are not thought to be serious.

The player was alone in the house at the time the fire broke out just after midnight, but his wife and children arrived at the scene as the defender was taken to hospital.

Jose Mourinho has demonstrated a kinder, more charitable side to his personality, by donating a coaching trophy awarded for his treble-winning season with Inter for auction in memory of mentor Bobby Robson.

Proceeds of the sale of the FIFA coach of the year award Mourinho won in 2010 will go to the Sir Bobby Robson Foundation and Breakthrough Breast Cancer.

“The entire family is completely astounded by this generous gift from Mr. Mourinho,” Robson’s son Mark said. “We are thrilled and so thankful to him.”

While at Barcelona, it was Robson who first gave the Portuguese an opportunity to coach. So now we know who to blame.