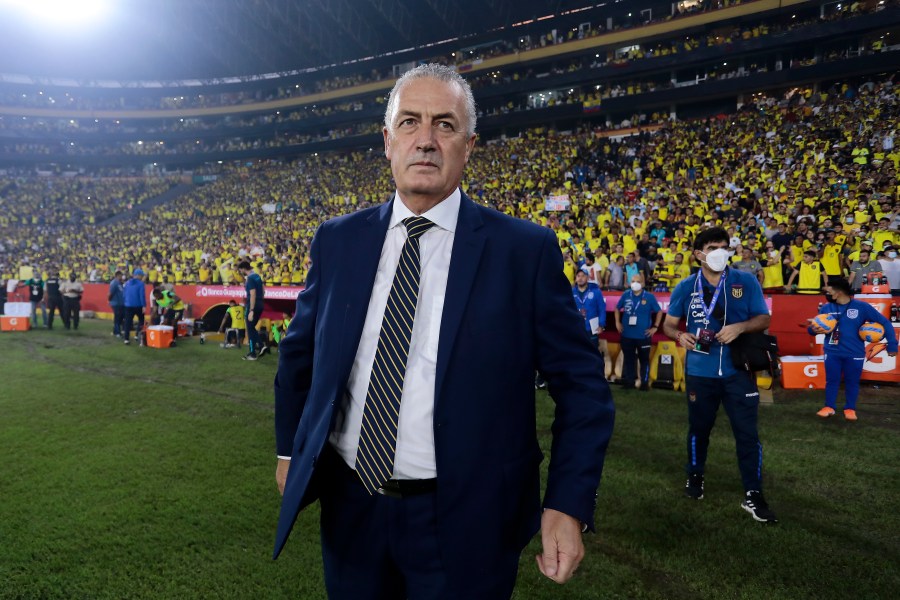 Ecuador were in trouble before your arrival in the World Cup qualifiers. How did you manage to turn it around?

We started working with less than 30 days to form a team to play against Argentina. When I arrived in Ecuador, I noticed that some players had lost interest in being part of the team – what it means to represent a country. Then I understood that I not only had to look for a team in 30 days, but that I had to find a team that identifies with something that is bigger. So the first mission was to recover a sense of belonging.

We had to rebuild from scratch. The generation that tried to qualify for the Russia World Cup had come to an end. In those circumstances, I got down to work. We had three battles against Brazil. We lost in Brazil, 2-0. Then we played the Copa America and drew 1-1 and then another 1-1 draw in Quito followed in the qualifiers. The truth is that that last battle in Quito was intense and high level. The two teams were looking for victory with their own tools. It is always important to be able to face this type of opponent – Brazil and Argentina. They are among the favourites at the World Cup and when you play them you know that you can face any opponent and match them.

The South American qualifiers are tough and challenging, with different types of regions, weather, altitude and matches in very different conditions. The matches are very hard. I believe that Brazil and Argentina are much better prepared now than before the Russia World Cup. The Europeans will face two very tough South American opponents, who mix European preparation with South American talent, a combination the Europeans are not prepared for.

FIFA moved the opening game a day earlier. Were you consulted and how do you feel about it?

We were not consulted about Ecuador’s match being moved. I believe this is a decision FIFA took considering the right of the host country to be part of the opening game. This is a fair and correct decision. I have been part of the last four opening ceremonies in Germany, South Africa, Brazil and Russia. These are your unique moments because the eyes of the world are fixed on it. The party and the colours in the opening game are unique. It’s a privilege for Ecuador. We have got a chance to be a part of this major event. We need to do our best to achieve the results that we want.

What I think is relevant is that both Qatar and Ecuador should be given enough time to prepare. We shall only have the players at our disposal starting November 14. Normally, teams have 17 days to prepare, but we will only have seven days. In fact, in our case, it is only six and this will give us a disadvantage, especially considering that the Qatar team is already able to train together. Ecuador should be given the players on November 13 if all teams get the players for seven days. We deserve to be on par with the other teams.

At World Cups with similar circumstances – Korea and Japan in 2002 – Argentina coached by Marcelo Bielsa was unable to get out of the group and the same for France who were the world champions. They had the same issue. Every team should have the same chance and that is why I want to ask FIFA to use their common sense so that all teams can have the same time of preparation for this event.

Is it correct to describe Ecuador as a counter-attacking team? How would you describe your coaching style?

If I have to define Ecuador, I will define it as a team that plays modern football. I told the players that I did not want to change the way Ecuadorian football is played, but I did tell them that if we kept doing the same thing the results were going to be the same.

Ecuador did not go to the 2018 World Cup in Russia. I believe since Russia, football has changed in a number of ways. Football is played in blocks, offensive, in the middle or defensive, looking for possession as well as pressing opponents high up the field, something many teams do well.

In addition, moving and rotating became very important to create space, mostly in attack, using the entire team including the goalkeeper as an extra field player. We put a lot of effort into the first pass as when we press high up we need to diminish the space that we concede. Pressing high, we can leave space in our defence, thus we have to be effective when pressing our opponents.

Ecuador interprets today’s football with compact lines and plays in blocks with speed and depth. The team always tries to maintain its style. We need to manage both the defensive and offensive transitions well and whenever we lose the ball, we need to have the capacity to regroup and restart the attack with speed. We plan the game based on modern-day tactics.

Brazil coach Tite believes Ecuador can surprise at the World Cup. What is Ecuador’s ambition in Qatar?

Ecuador will give it their all. We have three matches and nothing else but those three games. We will try to be among the top two teams in the group to earn the right to play a fourth game. If that happens, another type of World Cup kicks off, with a very different approach to the game. During those 90 minutes with potential overtime, I am confident of my players, but first, we have to face three, complex battles with an uncertain outcome. That is why I think our expectations in this very young team – the youngest Ecuadorian team to qualify for a World Cup – are to have a good tournament.

There is a lot of expectation in Ecuador. This team can identify with the feeling of the entire country. We are proud: we are not lesser than any other finalist. We know that quality, experience and history are to be respected but not feared. Taking the expectation into account, we still try to do our best in the World Cup

This will be the first World Cup with five substitutions. A good decision?

The weather will also play its part because the temperatures are going to be around 20-25 degrees and this may impact the players’ recovery. That is where the 26 players gives you the chance of having extra alternatives for substitutions if there are injuries or suspensions. I believe having 26 players gives you that extra safety cushion.

Can South America regain the World Cup for the first time since 2002?

I believe South America will arrive at this World Cup with a strong possibility of winning because Brazil and Argentina are at the top level with a higher quality than in Russia. Their teams are well consolidated and play with clear ideas. Both teams have had a significant turnover with a high level of current players. This puts them in a very good position.

Brazil and Argentina understand very well what the demands of the current game are. They can prepare well. Uruguay have a very strong midfield, one of the best in the world, with very good players and the ability to bring in new, young players. South America, I believe, has the possibility to win the World Cup.