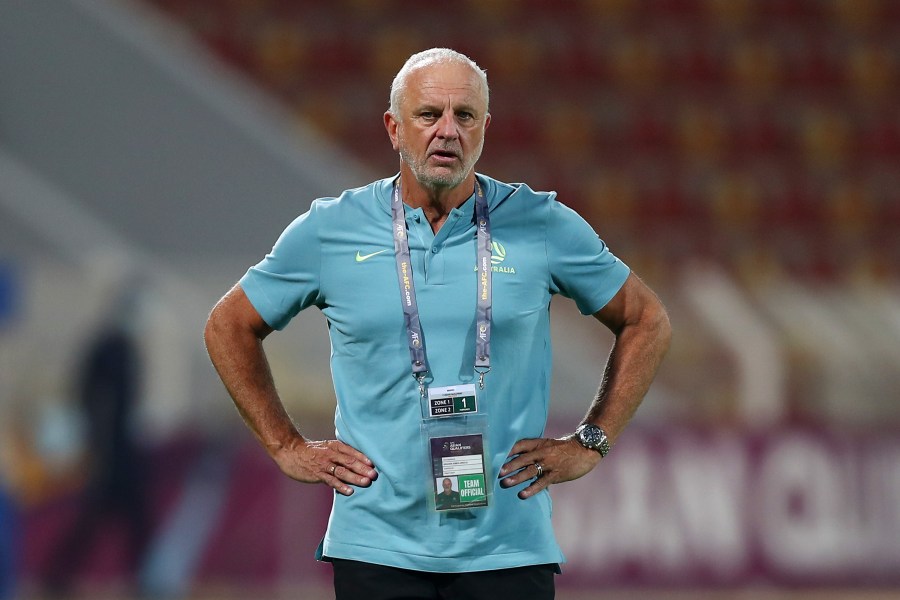 First of all, what are your reflections on the World Cup qualifiers and the dramatic play-off against Peru with that very remarkable penalty shootout?

If you’re talking about the whole campaign, it was a very difficult campaign for the way Australia as a country dealt with COVID-19. We played 16 out of 20 World Cup qualifiers away from home. We couldn’t get back into our country to play our first few World Cup qualifiers in the third phase. In the second phase, we played only one out of eight games and home. And in the next one, we played three out of five plus a playoff. So three out of six at home. It was quite a difficult campaign for the players and the staff because of international travel and lack of flights. The players would arrive in Australia on Tuesday instead of on Monday – some on Wednesday – to play on Thursday night. And therefore, we played our first couple of World Cup qualifiers in the third phase in Qatar.

I was looking whether we would play in Australia when speaking to the Australian Government but they clearly said not without the players doing a 14-day quarantine upon arrival, which meant that we couldn’t do it. We tried to get to Qatar where the time difference is only two hours because most of the players are spread around Europe, but also to have the advantage of playing our home games in Qatar. The play-offs were going to be in Qatar if we needed a playoff. So we are very familiar with it. That really helped us. We had that experience of four or five games in Qatar before Peru. We really felt like it was a home away from home for us, and the boys felt really comfortable. For Peru, it was probably their first game in Qatar. They had arrived only a few days before.

On reflection, I do believe planning off the field is a crucial part of international football – making sure you plan the preparation properly. Today, my reflection is that we prepared very well off the field and that helped the performance on the field. It was a great achievement beating Peru in a penalty shootout. It was very reminiscent of, and similar, to our game against Uruguay in 2006 with Guus Hiddink when we won in a penalty shootout. So, it was a great achievement from the players and, obviously, the nation is very proud.

Players like Tim Cahill, Mark Viduka, Harry Kewell and all those guys, they were top-class players, but they had this mentality of winning at all costs. Run till you drop, fight, kick and scratch for every ball and every second. They liked to turn a game of football also into an individual battle. First of all, you win your own individual battles on the field. And then if we win eight, nine of those individual battles, we win the game. And that’s the physical battle, not the technical battle, not the tactical battle. It was a physical and mental battle that has been reminiscent of Australia, for so many decades; that we like to be underdogs. We like to be written off at all costs. We like to have our backs up against the wall and no one giving us a chance, and to come out fighting. And that’s what I drove into the players for the whole time we were in Qatar – this is how we used to do it in all sports. Tennis greats: Pat Cash, Lleyton Hewitt and all of them, that’s how they were. That’s how the golden generation – if we call them that – were successful, years ago in football, and even the boxing champions – it was always a backs-to-the-wall type of thing. That’s the type of mentality we needed against the United Arab Emirates but also Peru.

You have familiarised yourself with Qatar. This World Cup will be quite unique in the sense that there is so little preparation time. How will that short preparation time influence the way you set up and prepare for the tournament?

I think with a short preparation time most nations won’t get a chance to have a friendly game before the kick-off in Qatar. Our players, you know, will arrive on Monday, some maybe Tuesday after the weekend rounds, which is seven days before our first game against France on the 22nd. I can imagine that it will be the same for France if players are playing at the clubs on Sunday; they won’t arrive on Monday or Tuesday. We’ve spent a lot of time in Qatar, in the hotels, in the surroundings, in the climate, and had the opportunity to use their training facilities. A World Cup preparation is normally two-and-a-half to three weeks, whereas with this one, it is really a hit-and-miss type of thing. We had five games in Qatar and we won all five games. As I said, the boys are very, very comfortable there. It’s only a six-hour flight from Europe. It’s only two hours time difference so their sleep patterns will connect really quickly. The unique air-conditioned stadiums are different to just a normal pitch. We’ve had those experiences and it’s definitely different playing in an air-conditioned stadium when the temperatures are so warm outside. With the air conditioning blowing right across the field and all the way through the stadium, it is really a unique way of playing.

What’s your assessment of your group with France, Denmark and Tunisia? Are you the underdog?

I think we are definitely the underdogs but people back in Australia are calling it the group of death. I call it the group of opportunity or the group of dreams because you go into a World Cup and, for me, there’s nothing better than to be able to play against the world champions – test yourself against the best and we will be ready to go when we get across there. I will remove the name of the opposition and the players because sometimes when you are talking about the French national team and the French players, it can be intimidating. It’s 11 v 11. It’s the blue shirt against the yellow shirt. We have a lot of respect for the French, but I also have a lot of belief in our players. It’s the first game of the World Cup for both teams and we will go out there and give it our best shot.

And what are your thoughts on Denmark and Tunisia?

Look, again, I think Denmark is in very good form. As an African nation, Tunisia is a bit unknown to us. Being from Asia, we watch the Asian nations but also the European. We will get a lot of detail over the next few months from my analysts and technology team. We will look at all of Tunisia’s games leading up to the World Cup. We will have people watching them to make sure that we get all those details right.

What should Australia’s ambition or realistic goal be at the World Cup?

Well, my goal is obviously to put in great performances and to make the nation proud. Australia has only ever won two games at a World Cup in the history of football for men. So one of those was against Japan in 2006, when I was an assistant to Guus Hiddink and the other one was a dead rubber with Pim Verbeeck against Serbia. I was with him as well in 2010. So my goal straightaway is to get to the last sixteen, to get into the second round and win a game or two in the group phase. People might think that I have high expectations and that I am dreaming, but you have to dream. You have to get those players to believe in themselves and when they do and when they believe in what we’re doing anything can happen.

Irrespective of what happens to your team and the Socceroos, what kind of a tournament do you expect?

I think the European nations will have a good advantage because most World Cups are at the end of seasons when players have played 60-70 games. They are fatigued when they go into a World Cup. This time, they will only have played maybe 10-12 games with their clubs and will go in fresh and ready, very fit and healthy. It’s going to be a really unique World Cup because having been to Qatar; from my hotel balcony I could see five match stadiums. People will be able to not only watch one game a day, but they can go and watch two or three games a day in a great climate. It’s going to be sunny every day and the weather is going to be nice. I do believe it’s going to be a unique World Cup and one that is going to really have high standards and some fantastic, fantastic games.

Is Europe’s dominance of the World Cup becoming a problem?

No, I don’t think so. The next World Cup is obviously going to be more interesting with 48 teams, but it just shows you that Europe is the strongest continent in world football. We played against Peru and we beat Argentina at the Olympics 2-0. South American football is still great, but it’s much slower than European football. If you play a fast game against the South Americans, really put pressure on their strengths, which is their technique, and don’t give him too much time on the ball and press and counter-press, you can take their strength away. Europe is just the continent where they probably got so much right with the European Cups. Even when players are playing at the club level, they’re playing in the Champions League, they’re playing at the highest level every week. A lot of great European players are playing in the English Premier League, which is clearly the best league in the world. The players’ performances will improve. It’s just a standard that Europe has right now.

For us, as a nation in Australia, it’s great that we are very forceful in pushing our players to go overseas and play in Europe because they become better players. When they come back and play for the national team, it makes it better. I think it’s the money that Europe has invested in football, the competitions and the structure, the development is showing why they are where they are. But I have to say that Asia is coming along very, very quickly. The Middle East nations are investing a lot of money in development and junior football. The likes of Saudi Arabia are investing massively. They’re buying Premier League clubs. There is really a massive football culture in Asia, like in Japan, that wasn’t there probably ten years ago. If you go to these countries and play, there are big crowds. There’s a real love for football, it’s becoming a real religion in those countries as well.