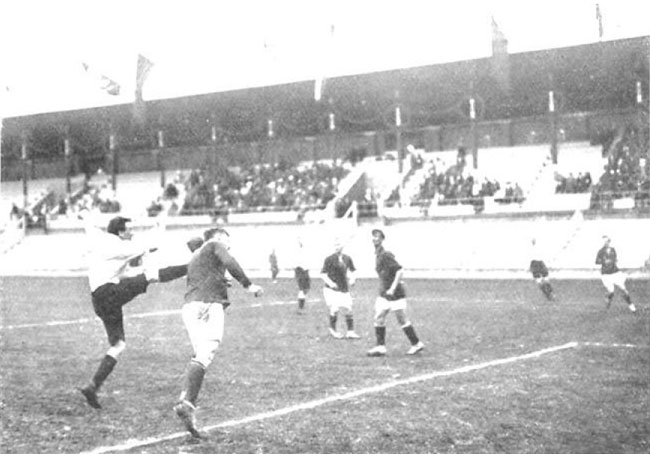 Wiberg, born in Turku in 1890, had moved to Helsinki in 1906, just in time for the inaugural Finnish Cup, the first official tournament established under the Finnish Football Association, which took place two years later. He had started out as a talented figure skater, but soon joined the ranks of Helsinki club Unitas, an early powerhouse of the Finnish game. Unitas had been formed in 1905 and was one of the first sports teams in the country to emphasize football. However, by the time Unitas were crowned the first Finnish champions in 1908, Wiberg had already moved on to another Helsinki club, Helsingfors IFK, where he had immediately taken over as captain.

Wiberg was widely considered an outstanding player, whose speed, skill and vision were almost unparalleled in Finland. When a Danish club paid a visit to Finland in 1909, Wiberg was applauded by the visitors as a player, who would imminently ”match the best Danish players.” The Danes went on to praise his ”noble style” as ”an example to all other Finnish players.”

Two years later in October 1911, Finland’s national team played their first official match, losing 5–2 to neighbours Sweden. Wiberg was not part of the maiden squad, but come spring, his sophisticated performances in the domestic football tournament had been noted. Wiberg was called up to Finland’s squad preparing for the 1912 Stockholm Olympics, and ended up scoring Finland’s sole goal in a 7–1 friendly defeat against Sweden. It was hardly a surprise when he was given a place in the eventual Olympics squad.

In Stockholm, thanks to a favourable cup format and an audacious performance, Finland became an international sensation by finishing fourth. One of the best performers in the young Finnish side was 22-year-old forward Wiberg, who scored the decisive goals against both Russia and Vittorio Pozzo’s Italy, thus attracting attention from various foreign clubs.

Once the Olympics were over, Wiberg was hastily recruited by a Russian club. He moved across the border to St. Petersburg and joined the ranks of Nevsky, one of the capital’s prominent football clubs. The pioneering player, who also took up a day job at a local stearin factory, soon quit Nevsky in favour of another St. Petersburg club, Sport, whose owner was said to be looking for ”the best European talents” for his team. Wiberg was indeed not the only foreigner to join Sport. Danish international Christian Morville as well as two Dutchmen were also recruited. While Wiberg had technically not gone abroad—until 1917, Finland had limited independence as a grand duchy of the Tsarist regime—Russian and Finnish football lives were not connected and had very little between them.

In Russia, the first official football match is said to have taken place in 1897, and by the end of the first decade, various Russian cities had established their own city leagues. A nationwide tournament was still missing, but things were about to change. While Finland had finished fourth, Russia’s national football team had failed miserably in the 1912 Olympics, which had triggered a radical shake-up in the Russian game. Right after the Olympics a new national cup tournament was proposed. The need for change was so imminent, that the first Russian Cup tournament took place in the fall of 1912, just months after the Stockholm fiasco. Bror Wiberg was one of the players called up to play for the unified St. Petersburg side in the inaugural Russian Cup. The tournament was also set to feature teams from Moscow, Kiev, Kharkiv and Odessa, but after both Odessa and Kiev failed to show up, St. Petersburg were given a bye directly to the final, where they were to face Moscow, the Muscovites having delivered a 5-1 knock-out to Kharkiv in the semi-final.

The competing football capitals had already met six times in 1912. Since St. Petersburg had won four of these friendly matches and Moscow just one, it was hardly a surprise when Wiberg and his team-mates found Moscow fielding seven Englishmen in the final. At exactly 5 PM on October 6th the final kicked off in front of around 3,000 spectators. After 90 minutes and an extra time, the scoreline read 2-2. It was getting dark, and having consulted the players, the referee decided to end the match, despite demands from the disappointed audience to play until the golden goal. A replay in Moscow was quickly scheduled for October 20th, and this time St. Petersburg proved superior. A match fought in harsh and icy weather conditions in front of 6,000 frantic Muscovites saw St. Petersburg win 4-1, despite Moscow fielding now even an eighth Englishman, and it was the Finn Wiberg himself who scored the fourth goal with a handsome long-distance shot into the corner of the net. The former figure skater from Turku had been crowned the first ever Russian champion.

The following year St. Petersburg lost in the final against Odessa, but the title was ultimately left unawarded, since Odessa had failed to comply with the newly-set foreign player quota. Wiberg himself was not affected, since he had been granted a Russian passport and was now playing under the alias Boris Rudolfovich. In 1914, Wiberg was no longer included in the St. Petersburg squad for the national championships, but according to legend, it was only because the club had forgotten to send an invitation. Wiberg, who excelled as a forward but could comfortably take on any position in the prevailing 2– 3–5 formation, also celebrated two St. Petersburg city league titles with Sport and played several international matches—one of them, curiously, against Finland’s national team—before the Great War broke out and he travelled back to Finland.

Wiberg went on to play for his former Helsinki based club HIFK and worked in various football jobs until his death in 1935. He never won the Finnish title, but once he won silver with HIFK.  Bror Wiberg is still the only Finnish football player to have won the Russian championship and very likely the first Finnish semi-professional player abroad.