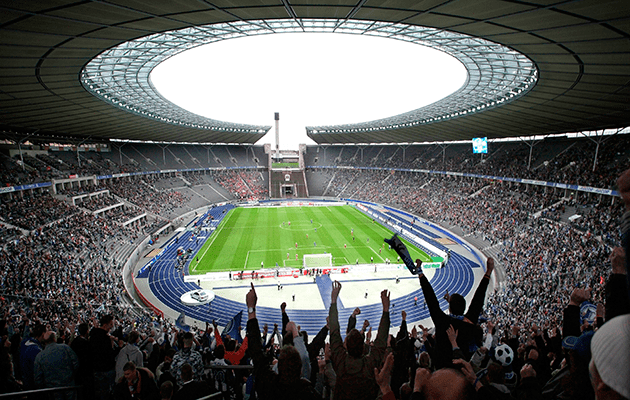 The Fernsehturm stands sentinel over the city, visible from all corners of Berlin: one of the city’s most enduring landmarks, amidst a city of landmarks. There are few unused superlatives in the English language to describe the German capital. Often lauded as one of the cheapest capital cities in the world to visit, it draws you in with its rough yet charming and vibrant edge. Tourism is now big business in Berlin and politically, Germany is a major player on the global stage thanks to a progressive democracy and a strong economy. The German Parliament, the Bundestag, is in Berlin, and Chancellor Angela Merkel is the flavour of the month following her admirable handling of the refugee crisis. Despite this, the German capital falls way behind its European contemporaries when it comes to the country’s number one sport: football.

Berlin’s twentieth century history may partly explain its stunted football growth. The city was decimated by World War II and due to the continued aerial bombardment over 40% of the population fled to safer ground. Evidence of this is presented by the unusual “rubble hills” which are the result of post-war debris, 75 million cubic metres of it, beiqang pushed into big hills which later became part of the landscape of the topographically flat city. The end of the Second World War wouldn’t signify respite for the Berliners who would soon be consumed by a more protracted, ideological conflict: the Cold War. In 1945 Germany was carved up by the victors of World War II into “Allied Occupation Zones”. The Soviet Union took the Eastern part of Germany; the French, British and Americans took the West.

Berlin, also split similarly between the four victorious superpowers, technically fell into Soviet territory, the western portion of the city becoming an isolated island deep within Communist territory. Between 1948 and 1949 the Soviets attempted to squeeze the Westerners out of Berlin, blockading them and preventing the circulation of much needed good and medicines. In what became known as the Berlin Airlift, supplies were dropped by the Western Allies although this didn’t stop millions of people defecting from East to West. To counteract this, the East German (GDR) government almost overnight created a physical barrier between West and East, first with barbed wire and later with a concrete structure which would garner infamy around the world. The Berlin Wall, completed in 1961, was designed to stop the brain drain of workers from key sectors such as medicine, engineering and education. For Berliners, the inconceivable “Iron Curtain” was now a permanent, fixed, physical entity and the Wall would go on to become one of the cruellest symbols of the Cold War. It divided a city, split families, and destroyed the economy as giants of banking and industry relocated their head offices to Western Germany.

Hertha BSC, hailing from the affluent western suburb of Charlottenburg, are currently Berlin’s most prominent side. The club has been playing in the stunning Olympic Stadium, designed by architect Werner March at the behest of the Nazis for the 1936 Summer Olympics, since 1963. It was overhauled ahead of the 2006 World Cup and is now one of Germany’s more modern and impressive stadia, hosting the domestic cup final and many other special events. It maintains its historical feel, keeping the twin towers, natural stone blocks encircling the stadium, Olympic torch and Olympic rings whilst simultaneously appearing modern and state-of-the-art. Riding high in the Bundesliga, Hertha trail only behind traditional powerhouses Bayern Munich and Borussia Dortmund, although this is surprising, and somewhat of an anomaly. The city of Berlin provided 24 of the German Football Association’s (DFB) 86 original founder members, and Hertha were one of these, but their history has not been littered with trophies and success. The club won successive German championships in 1930 and 1931, whilst German football was still a regionalised affair before the inception of the Bundesliga. In what comes closest to being the club’s “golden era”, Hertha finished runners-up in the league in 1975, were beaten finalists in the German Cup finals of 1977 and 1979 and reached the semi-finals of the 1979 UEFA Cup after qualifying through the now defunct Intertoto Cup.

Despite hailing from an affluent area of a capital city, and calling an impressive stadium home, Hertha have never really threatened the elite on a national scale, let alone on a continental one. Only five years ago they were plying their trade in Germany’s second tier, the 2. Liga, and this gave Berlin the ignominious tag as the largest capital city in Europe not to have a top flight representative in its national football league. It did however, allow Hertha to stoke the flames of their rivalry with FC Union Berlin. Die Eisernen, from the old Eastern suburb of Köpenick, can perhaps lay claim to being more globally well-known than their wealthier, relatively more successful rivals from Charlottenburg.

Their historically politicised fans, of a left-leaning persuasion, as well as publicised events held at their stadium, the Stadion An Der Alten Fortserei, have made Union a go-to club for ground hopping football tourists. The “World Cup Living Room” for the 2014 World Cup, when fans were encouraged to bring their sofas, tables and lamps to the stadium to watch matches on the big screens, and the annual Christmas carol events, where fans are invited to fill the stands and the pitch and sing by candle light, are such events that endear the club to both locals and foreigners alike. 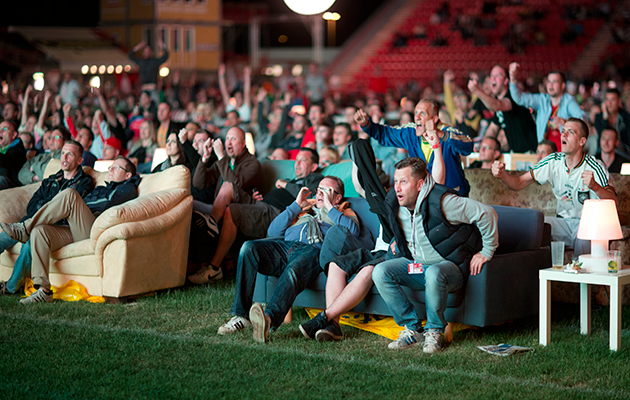 German fans watch the opening game of the soccer World Cup 2014 while sitting on sofas, in the 1.FC Union stadium in Berlin

The club, founded under a previous guise in 1906, took on its current moniker of FC Union Berlin in 1966. Union’s recent on-field history has been rather underwhelming with most of it occurring in the second and third tier. In the early part of this century they did reach the German Cup final, losing 2-0 to Schalke 04, and got as far as the second round of the UEFA Cup the following year, before elimination at the hands of Bulgarian side Litex Lovech. Union have recently solidified their position in the second tier, where they have spent the last seven years, and currently maintain a respectable mid-table position.

The rivalry between Hertha and Union is strong but a lack of competitive games between the two means it pales into insignificance when compared to the vitriol between Union and Berliner FC Dynamo. Dynamo, established in 1966 and in its current guise, has indelible links with the East German Ministry of State Security, and was the known favourite of the foreboding Erich Mielke. Somewhat controversially, but not surprisingly given that they could count the Stasi boss as a fan, the team won ten consecutive East German championships between 1979 and 1988, as well as the cup in 1988 and 1989 with allegations of corruption, match-fixing, intimidation and refereeing incompetence rife. Upon reunification Dynamo were admitted to the new national third tier, competing in time for the beginning of the 1991-92 season but now operate in Germany’s regionalised fourth tier, alongside other Berlin clubs such as Berliner AK07, Viktoria 1889 and Hertha’s reserve side, Hertha II.

On a national level, no team from Berlin has won the championship or the cup during the Bundesliga era. The continental footprint is even more faded, and Hertha’s semi-final appearance in the UEFA Cup occurred over forty years ago. How is it possible that Germany, one of the most advanced and economically powerful nations on the globe, cannot produce a top side in its own capital city?

Upon examining the capital cities of other top European football nations (based on the top 15 in the UEFA coefficient as of the end of the 2014/2015 season) Berlin is almost peerless in its inability to produce a top side. Teams from Bucharest, London, Madrid, Rome, Lisbon, Paris, Kiev, Amsterdam, Moscow and Brussels have all won major continental trophies as well as periods of domestic dominance. Sparta Prague, AEK Athens and Young Boys Bern, of the Czech Republic, Greece and Switzerland respectively, are all domestically decorated, as well as appearing in the latter stages of European competition during at least one stage of their history. Turkey is perhaps the one exception with the biggest team from the capital (Ankara, not Istanbul!), SK Genclerbirligi, only having the 2001 Turkish Cup on their honours list. But let’s face it, when it comes to footballing history and pedigree, Turkey is not Germany.

The aforementioned Erich Mielke was once quoted as saying: “Football success will highlight even more clearly the superiority of our socialist order in the area of sport.” You only need to see evidence of Soviet, Cuban and Chinese records at certain sports in the Olympics as proof of Communist regimes’ dedication to sport. Famously, the GDR had a chance to prove their superiority by facing their West German rivals in the 1974 World Cup, in what proved to be the high point of their footballing history, chalking up a one-nil victory.

This fleeting success failed to translate to the domestic game, and whilst Eastern German teams floundered behind the Iron Curtain, their West German counterparts thrived continentally. Bayern Munich lifted the European Cup in three consecutive seasons, from 1974 to 1976 with Hamburg winning the same trophy in 1983, ironically knocking out domestically dominant Dynamo Berlin in the first round.

Political ideology alone cannot be blamed for East Germany’s lack of success on the continent. In the 1986 European Cup final, Steaua Bucharest managed to defeat Barcelona on Spanish soil, despite operating under the auspices of Communism. Red Star Belgrade, of the former Yugoslavia, won the 1991 final, defeating Marseille in Bari and would go on to become World Club champions, defeating the Chilean team Colo Colo 3-0 in Tokyo.

Reunification came to Germany in 1990 following the fall of the Wall, and over a quarter of a century has since passed since that watershed moment. Whilst the western German teams have thrived, dominating the Bundesliga, the Berlin clubs have yet to catch up. It is generally difficult in modern football to unseat the traditionally successful and powerful clubs, as wealth and reputation becomes entrenched. Finishing third behind Bayern Munich and Borussia Dortmund, and winning the league-within-the-league, would represent major success for Hertha and assure them Champions League qualification. It will be long overdue, but the footballing city of Berlin will then be on the lips of football fans at home and abroad.