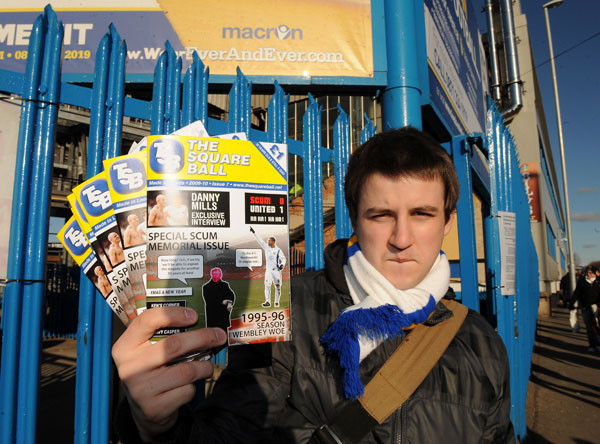 I hate it when it happens. You’re there, doing your best. Not just selling 32 pages of printed paper, but selling hours of planning, of work, of writing, of getting pictures, of pleading with others to help you with an article or some design work. You’ve only had four hours sleep three nights on the trot to get this out in time and all you want to do is flog a decent amount. We don’t have to sell out or anything, I don’t mind if people don’t want it – that’s up to them – I just want to get enough money to do the next issue. It’s when you’re there; shouting FANZINE at the top of your lungs and someone comes up and asks: “Is that the programme?”

Hell hath no fury like a fanzine editor scorned.

But in an age of ever increasing digitalization, are these programme seekers right to ignore me? Are printed fanzines becoming obsolete as internet forums and phone-ins become an ever more important part of the footballing landscape? In other words: can fanzines provide something different to what is available elsewhere, and is it worth paying for?

Well, it certainly was true in the past. The reasons behind the growth of football fanzines in the 80s are pretty well documented and accepted: football fans were marginalised and demonised. Rather than just accept their lot, fanzines were a place where ordinary fans could challenge perceptions, organise against injustices, or even simply vent spleen, have a joke, or recommend a good pub at the next away match.

In short, they were the distilled essence of the terraces. The concentrated juice, if you like. Yet since football’s rehabilitation and the rise of the internet, this kind of fan content has become much more common. Mainstream media want to know ‘the fan’s opinion’ and interview them for TV bulletins. Talksport and the like clog up the airwaves with cliché after cliché, like fat building up in a drainpipe. There are a glut of chat rooms, normally several per club, and blogs are ten a penny. Now, you don’t have to go far to bump into a fan’s opinion.

At its best there isn’t a need to go beyond the internet for the old fashioned fanzine content. And that’s great. No one can argue that it isn’t brilliant to be able to easily access and share fantastic articles and content quickly and easily through twitter. But, there is a problem with this too. Social media can quickly turn into a pretty nasty place, good arguments and articles can get drowned out by clamour and clickbait all too easily.

But football fanzines are the antidote. Once a sanctuary for the marginalised fan, they are now a sanctuary for the overexposed fan. Any half decent editor will filter out the internet noise and produce a publication specific to your club that is much more interesting than sifting through yet another ill-informed blog on the manager’s tactics. Also, I think it encourages better writing too. Give a man (or woman of course) 180 characters and he’ll most likely be flippant due to the brevity required. Give him a blog post and he’ll most likely want it to appeal to a wide audience to encourage hits. Give him a guarantee of being physically printed however and you’ll see him ambitiously delve to the heart of the matter in an attempt to write something that is worth picking up again and again. Out of all those options, what would you rather read?

There is still something oddly magnetic about the printed word. The way it’s stamped onto the page forever gives it something of an aura; a permanency that makes it more important than your easily-deleteable-blog. And there is also still much better scope for integrated design in printed media. Think of your standard webpage: links at the top, title of article, text, picture or two. Sometimes the text wraps round the picture, sometimes it doesn’t. That’s normally about it. In many modern fanzines design plays a much more important part then being simply something to hang the article on, and the publications are often extremely attractive objects.