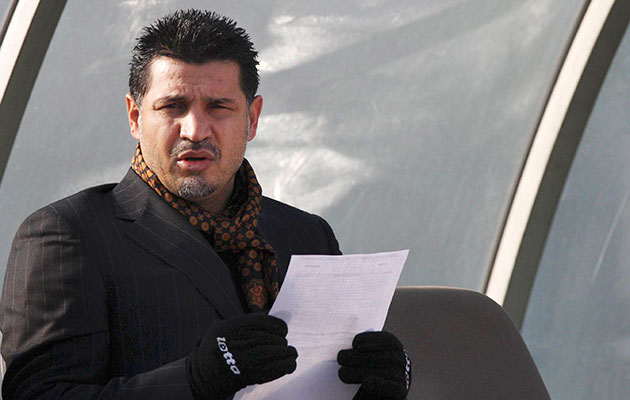 Fate would dictate that Saba Qom and Tractor Sazi would meet in the Hafzi Cup last sixteen. The match would turn out to be ill-tempered and tempestuous – one which would see Tractor Sazi finish with nine men – but also one that would bring the two clubs’ mounting tensions to a head. Saba’s rising star, Farid Karimi, laced up his boots and walked out with his team onto the pitch. However, Karimi wasn’t wearing the white of his club, Saba Qom: he lined up in the red kit of their rivals, Tractor Sazi.

Many countries impose compulsory military service and do so because the numbers of those voluntarily joining the military are not sufficient to meet their perceived needs. For this reason, compulsory conscription is perhaps at odds with a nation’s wider views: if the population supported a larger military, more would surely apply voluntarily. Often, therefore, those forced into conscribing do so under duress.

Iran is one such country imposing compulsory military service. Every male spends two years in the military once they reach 18 years of age. Most Iranian footballers do not voluntarily conscribe at eighteen. They delay it as long as possible and wait for the authorities to catch them. Some have even been known to doctor their military records in an attempt to evade conscription.

There is a unique way an Iranian footballer may mitigate the effect of conscription. This goes some way to explain why they try to delay conscription.

There exist loosely-affiliated military clubs in Iran. These army clubs offer a special type of military service which, for all extents and purposes, allows players to train and continue to play professionally whilst carrying out a nominal, token, conscription. These clubs are very attractive to footballers and, as a result, often have the pick of the litter when it comes to domestic talent. One of Iran’s such military clubs is Tractor Sazi – a domestic giant. Tractor originates from Tabriz, an Iranian-Azerbaijani city most famous for the quality of its hand-woven carpets. Tabriz also provides Tractor a huge Iranian-Turkic fan base – one of the most vociferous and tribal in Asia – who often pack Tractor’s nearly 69,000 capacity stadium full to the rafters.

The score remained 0-0. Tractor had, up to now, the better of the game with Karimi proving to be a thorn in the side of his parent club, Saba. With the match devolving into a frantic, end-to-end, affair, both teams poured forward desperate for the win. Saba sprung a counter attack against the run of play. Gifted midfielder Karim Eslami gently lofted a through-ball over the top of Tractor’s languishing defenders. Whilst the defenders were still on their turn, striker Mohammad Ousani galloped through, bearing down one-on-one with Tractor’s goalkeeper, Mehrdad Tamasbi. Tamasbi had no option but to bring Ousani down. The referee brandished the red card immediately. Tamasbi, head down, walked off the pitch.

Eslami, orchestrator of move that brought the penalty, stepped up confidently from twelve yards. He struck the ball true and fierce, but it was straight down the middle of the goal. Tractor’s substitute goalie, Mohammad Reza Akhbari, managed to get two hands behind the effort and save the penalty. Akhbari was overjoyed. Tractor’s fans were ecstatic. Saba and their fans silenced into stunned disbelief.

Farid Karimi, a young and promising striker playing for one of Tehran’s minor clubs, Steel Azin, was 23 when he moved to Saba Qom. His arrival brought with him a rich vein of form, resulting in him finding the net fourteen times in forty-six games over two seasons, with him becoming an integral component of Saba’s attack. At the end of his second season for Saba there was talk of an international call up. Instead, conscription caught up with Karimi. His stock, however, was sufficiently high for Tractor to be interested in him, and so it was agreed between Saba and Tractor that Karimi be registered to play for Tractor during his two year conscription. This arrangement benefitted all three parties: Tractor could incorporate one of the league’s better talents to their squad for free, Karimi could maintain and showcase his unquestionable talent, and Saba safeguarded their striker in a football environment, instead of an army barracks, for two years.

As it turned out, Karimi’s impact at Tractor was not as grand as that at Saba. Tractor, the much bigger club, had a wealth of talent in their squad and Karimi found himself on the fringes: a much smaller fish in a much larger pond. However, all in all, Karimi could count himself fortunate. He was able to spend his military service by continuing to train and to occasionally play for Tractor. In early September 2015, Karimi completed his military service. Saba expected to welcome Karimi back immediately. Much to Saba’s consternation, Tractor – in control of the transfer process – did not rush to transfer the player back.

Saba had been piling forward in search of an equaliser, Tractor repelling every wave. Saba couldn’t penetrate the ten bodies Tractor threw in front of every attack. Tractor, for the first time since their sending off, sprung their own counterattack and they were awarded their own penalty. Saba defender Beikzadeh clumsily felled pacey winger Shahin Saghebi. Tunisian striker Hamza Younes stepped up and tucked it away coolly to the keeper’s right and sent the Tractor and their fans into rapture.

The Football Federation Islamic Republic of Iran (FFIR) instituted a crackdown on forged military records in July 2014. A list of footballers who possessed such fakes was publicised. Three prominent national team players also appeared on that list. One of Iran’s more recognisable talents, Rubin Kazan goalkeeper Alireza Haghighi, appeared on the list. Whilst the FFIR could not force players into complying with their conscription duty, they did threaten to refuse players’ registrations in the domestic league unless they either completed their military service or were registered with one of the military clubs.

Haghighi chose to remain abroad which lessened the impact of the FFIR’s threats. However, this does not assuage the very serious allegations of him doctoring military service records and, as a result, failing to attend military service. Both such acts are punishable with a prison sentence. Whilst Haghighi remains out of the country, this issue remains largely academic. Whilst he has since been allowed back into Iran to play for the national team’s home games, it will be interesting to see what happens if Haghighi returns to Iran permanently.

Saba still couldn’t find the magic formula. They had plenty of the ball but their attack was blunt. Another sending off for Tractor – a second yellow for defender Iranpourian for a stamp – but still Saba couldn’t find that cutting edge.

The referee blew full-time. Saba had been knocked out.

Saba’s manager is Iran’s most famous footballing export. Ex-Bayern Munich goal poacher, Ali Daei, was vocal about the injustice. Daei was, perhaps, the first to openly question this twisted dynamic. He bemoaned,

“In which system would you find a player that belongs to the club, who has been promoted through the ranks of the club, and gets his wages from the club, conveniently turns up for the opposition and plays in an important game in a cup competition?”

Daei, like many of Iran’s top tier footballing professionals, also suffered personally because of compulsory conscription. Early in his career, he had an offer to move to the Japan at a time when figures like Gary Lineker and Arsene Wenger were making waves. He was denied the move because he had not completed his military service. He therefore remained at his club, Bank Tejarat, completed his military service, and was called up to the national team and starred in the 1994 Asian Games.

It was of course unfair that Daei was not granted his move, but in the years that followed, he raised both his and his country’s profile by performing at the top level for teams including Arminia Bielefeld, Bayern Munich and Hertha Berlin, as well as scoring a world-record 109 goals in 152 games for his country. All that being said, it is doubtful that Daei would appreciate the remark that cream always floats to the top, regardless of the obstacles.

Whilst Daei bemoaned the injustice of seeing his team’s striker lining up for the opposition, he must not have known at the time that the Tractor substitute goalie, Akhbari (responsible for saving the penalty) and their winger, Saghebi (who was fouled to award a penalty to Tractor), were both registered from other clubs to Tractor so that they too could complete their military service.

When military service reaches its tentacles into sport, it is usual to hear how it may adversely affect the careers of individuals. In Iran, however, with the advantages military teams such as Tractor Sazi have, it also distorts fair competition in its domestic game.