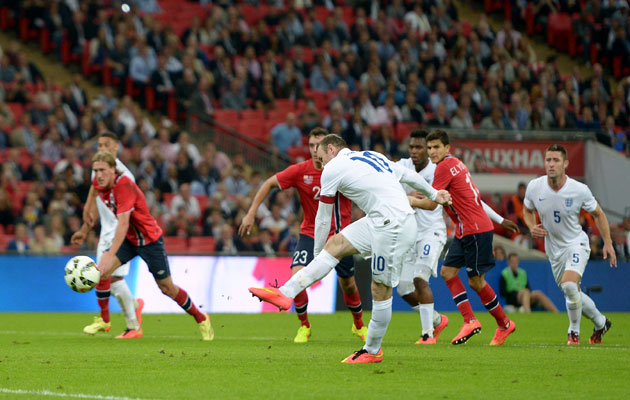 Watching England labour to a 1-0 victory against Norway on Wednesday night, in surely the most pointless of poorly timed international friendly matches, it was difficult to shake the suspicion that you were watching a team who had learned little from the last ten years of progression in the modern game.

Before the match a VT was shown of England’s ‘greatest’ moments – in an attempt to gee the less than half full Wembley crowd into a frenzy of excitement and blood-lust for the impending arrival of that most deeply ingrained rivalry for English football fans:

Few in England can forget, far less forgive, the wanton destruction the Vikings caused until their defeat in 1066 at Stamford Bridge (presumably some years before the Roman Abramovich revolution).

The real problem with the England highlights video was that it rather conspicuously omitted anything more recent than David Beckham’s last minute free kick against Greece during that triumphant 2-2 draw in 2001 that saw England qualify for the World Cup in Japan and South Korea.  That was thirteen years ago now.

Instead what the video reminded the half full stadium at Wembley was that David Beckham was the last England player to actually step up to the plate and take responsibility.  Beckham played well for England in a way that Steven Gerrard, Frank Lampard and, alas, that increasingly sad symbol of English footballing decline Wayne Rooney, never have.

It is this display of character on the pitch that English footballers lack.  Nowadays England’s players are thrust into expensive football academies from an early age, given lucrative contracts and shielded from any degree of reality or struggle by agents and clubs desperate to protect their investment.  There was a story some years ago of a famous young English football player who bought a television for some tens of thousands of pounds because he had no idea how much it actually cost.

We may develop players with good technical skill (debatable) but ultimately what this culture produces is what England currently have – a generation of characterless individuals incapable of taking responsibility and stamping their personality upon a game.  At club level they can line up alongside foreign talent, such as Luis Suarez or Didier Drogba – players who have moved to a new country, learned a new language and therefore have the confidence and mentality to produce when it matters.

Is it a coincidence that David Beckham, arguably England’s only notable stand-out performer of recent years, accepted the challenge of spending half his career abroad during a 10 year stint at Real Madrid, LA Galaxy, AC Milan and Paris SG?  Is this symptomatic of his character and was Beckham’s confidence and ability to assume responsibility in football games enhanced by the benefits that living in a foreign country produces?

Perhaps it is more of an accurate indication of the sort of character that is needed to play for England – as opposed to those that are comfortable on these shores and afraid to leave their homeland, learn another language and adapt to another culture.

For all Gerrard and Lampard’s domestic success they have both badly underachieved at international level and at times looked phased by it – most notably their penalty shoot-out misses against Portugal in the 2006 World Cup quarter final.

Is this a factor in why England players struggle with penalties, when they have no-one with the mental strength of Luis Suarez or Didier Drogba around to inspire them?

The other painfully noticeable thing about England’s possession based 1-0 victory over the dastardly Norwegians on Wednesday night was the utter staid predictability of their play.  While modern football teams like Barcelona and Germany play with ‘triangles’ of players passing and moving (so that the man with the ball always has two players in transit creating space or providing an option to pass to) England instead lined up for 70 minutes against Norway with a flat 4-4-2 and then proceeded to pass the ball along the line with an infuriating predictability.

When Norway could be bothered to interrupt England in their pointless display of possessional prowess (presumably out of boredom), England’s answer was to attempt a one-man slalom through the entire Norwegian defence – which rarely got past the first or second defender.

Contrast this to Chelsea’s recent 6-3 victory at Goodison Park against Everton (a game where Chelsea had only 39% possession but still won by a convincing margin) and what remains is the lingering impression that England are playing a style of football that is obsolete and with a group of players who may have the skill, but alas lack the mental strength of character to succeed.