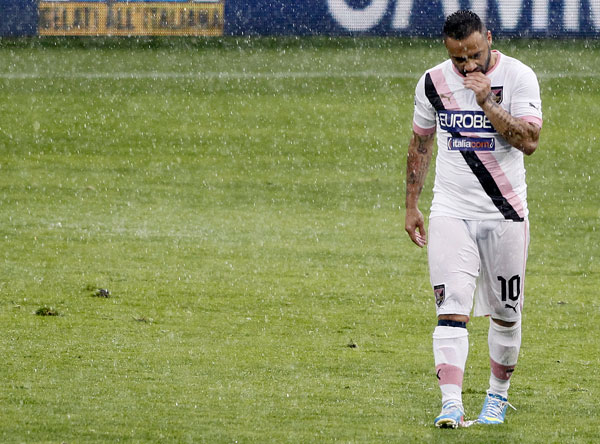 Serie A is synonymous for its aging players who still perform at the highest level. Antonio Di Natale, Franceso Totti, Javier Zanetti and Luca Toni are just some of the division’s evergreen ‘Peter Pans’. These players still play an integral part in their teams success and are sadly missed when they eventually retire.It is because of these years of persistent performance that these players are usually given a fanfare when they leave. Most people who wax lyrical about the Italian game have already shed tears about Di Natale’s choice to retire this season.

It is for this reason however, that less was made of Fabrizio Miccoli’s sudden departure last year. Had this happened to Javier Zanetti Hercule Piorot may have been called in to ask his ‘little grey cells’ just how this could happen. Miccoli is no less significant than Luca Toni or arguably Antonio Di Natale, but his sudden disappearance caused barely a ripple in the global football media pool.

Miccoli is remembered by everybody who follows the crazy, passionate and dramatic world of Italian Football. The pocket-sized striker shot to fame in 2002 when he sealed a lucrative move to Juventus after impressing at little Ternana. His time is Turin was not as successful as he would have liked and despite loan spells at Perugia, Fiorentina and Benfica he never seemed to really settle. That was until 2007 when he moved to Sicily, he did not know it yet but it was the start of a love affair which saw him become one of the most iconic players ever to wear the pink shirt of Palermo.

Although starting slowly in his first season (netting only eight goals) he soon was idolised by the fans due to his overall work ethic and willingness to sacrifice for the team. He was popular in the dressing room and soon became vice-captain and then eventually captain in 2009. His goalscoring also gathered pace and in the following the three campaigns he netted 42 times as well as providing an outstanding 22 assists. It was clear to all that he had found his spiritual home.

Miccoli ended up as Palermo’s all-time top scorer and it was clear to many that even under the tyrannical reign of Maurizio Zamparini, he was the constant (the President was known for having a coach expulsion rate they nearly matched his striker’s goals tally).  The little magician turned out and played at one-hundred-percent for every single coach put in front of him. He is the lasting memory of the era where so many merely passed through on their way elsewhere.

It is easy to see why his form and contribution to Palermo was of such importance to the Rosanero. In 2012, speaking to assorted Italian Press he said: “I am very happy to have become Palermo’s record goal scorer, as I married this project because I firmly believed in it. Now I want to continue like this without stopping. I see many people who respect me and this gives me a lot of strength as they help me do well for Palermo and for myself. As for my future, I am relaxed, as I have a splendid rapport with President Maurizio Zamparini and have another year left on my contract. A renewal depends on the club, but I can say my priority is Palermo.”

Last season saw Palermo relegated to Serie B and even with Miccoli’s strong ties to the Sicilian outfit it would have been no surprise if he had left to join a top flight team.  At 34 years of age he was positively a ’young pup’  in comparison to Zanetti or some of those presented to the mystical figures in white coats at the Milan Lab.  Even a proposed move to Australia was scoffed at by many as he seemed to still have so much to offer.

It is at this time that he seemed to just fall off the radar and disappear into the night. The image of Fabrizio embracing Mr Zamaperini, (both in tears), before being lifted onto a horse, donning his cloak and riding off into the darkness with the Stadio Renzo Barbera fading behind him,  actually does not seem that farcical. In reality it was anything but. Where was Miccoli’s grand fanfare? Where were all the tributes that were festooned on Alessandro Del Piero when he left Juventus? Where was the distraught Curva, so upset that their tears soaked up the Pyro display?

The reason is one synonymous with Sicily – it was a connection to the the local Mafia that lead to the rather unfortunate end of his time with the club. Do not fear, they did not kill him, but he did officially end up under investigation for buying telephone SIM cards for Mauro Lauricella, son of alleged Mafia boss Antonino Lauricella.

“What happened to Miccoli is the proof it’s best he leaves Palermo,” Zamparini told Radio Radio at the time. “Now he needs a change of air and can go to Dubai. I don’t know the situation well, but unfortunately he couldn’t have known that his friend was the son of a Mafioso.”

With Miccoli now forcibly moved off the radar it seemed that Italian Football was ready to turn its back on him. It was barely noticed in July when Lega Pro Prima Divisione club Lecce announced that they had signed Fabrizio. This being Italy the romance had not died quite yet and here was Miccoli now returned home to his boyhood club and, more crucially, his home. One can almost picture the powerful forward dominating the games Lega Pro before running home to Mamma in full kit, ball under his arm and a smile on his face. Small in stature, huge in personality and a giant on the pitch Miccoli has mixed it up with some of the greats of the game.  He is still scoring for Lecce but the differences are his celebrations. They may not be his best finishes or his most important goals, but they mean more to him than any in his career.