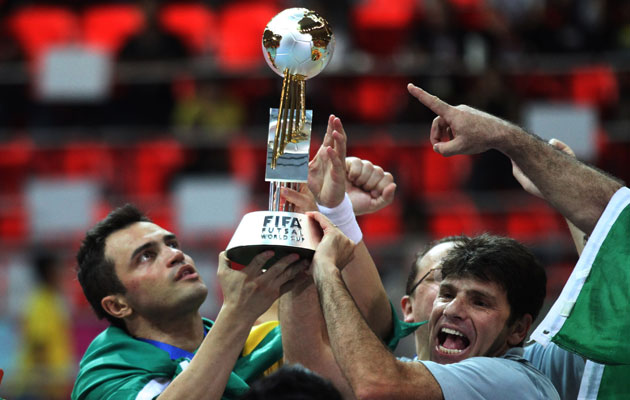 The progression from futsal to football is a well-trodden pathway. Cristiano Ronaldo, Ronaldinho, Andres Iniesta, Neymar and Lionel Messi are just handful of the players who have credited the small-sided game as a key part of their early development.

The switch between the indoor courts and the outdoor football pitch is usually made when a player is in their mid-teens. Clubs across Brazil, Spain and Portugal use futsal as development tool in the younger age groups before they make the step-up to full size outdoor pitches. It’s a proven route to success too, with nine winners of the Ballon d’Or since 1997 starting out their formative years playing the game.

But futsal is a game itself, and if you believe FIFA, it’s the fastest growing indoor sport in the world. Perhaps the biggest name in the sport is Alessandro Rosa Vieira, better known as Falcao. The Brazilian has become infamous not only among followers of the sport, but his audacious goals and improbable skills have caught the attention of football fans around the world too.

Like many young Brazilian’s, Falcao grew up playing futsal, but unlike his fellow countrymen Neymar, Ronaldinho or Robinho, he didn’t move into football. Instead he stayed indoors on the futsal courts where his performances for Guapira in the regional championships as a teenager in Sao Paulo earned him a move to the futsal team of Corinthians. After five years at Time do Povo, he moved to GM Chevrolet and a first call up to the Selecao soon followed. Two World Cups and four World Player of the Year awards later and Falcao has become a household name in Brazil and is often referred to at the ‘Pelé of futsal’, such is his standing in the game.

However, Falcao’s dream had always been to play football, in particular for Santos, the club he supported as a boy. But any hopes of turning out for Peixe at the Vila Belmiro were dashed when he failed to impress during a trial. He eventually wore the white of Santos in 2011 when he joined the futsal set up at the club, but his stay was short-lived when the team was disbanded along with the women’s football side in order to raise the funds to keep Neymar in Brazil.

By 2004, Falcao had become an integral part the national futsal side and by the end of the year he was named the FIFA World Player of the Year for the first time. His dreams of making it in professional football were long gone; he was a futsal player now and the best in the world.

Nevertheless, his dreams of becoming a footballer were revived after a chance conversation between his brother and Sao Paulo Futebol Clube president Marcelo Portugal Gouvea. While his brother was installing an air conditioning unit for the late Tricolor president at his house, the pair began talking and before long the topic move onto Falcao, whose performances for the Selecao and recent player of the year award had earned him recognition across the country. During the conversation Gouvea is said to have invited Falcao to sign for Sao Paulo, it was an offer he couldn’t refuse. He now had the opportunity to take that pathway from futsal to football; only as a 26-year-old, rather than as a youthful teenager.

Falcao signed a six-month contract with the Campeonato Paulista side in a switch that grabbed the imagination of both the football media in Brazil and Sao Paulo fans. Unfortunately for Falcao, then Soberano boss Emerson Leao was less than impressed with his arrival at the Morumbi. The World Cup winning goalkeeper pointed to his previous failed attempts at breaking into football with Portuguesa and Palmeiras, both which ended without a single appearance for either side. Leao also claimed that Gouvea told him that the signing of the futsal star was for marketing purposes, an idea that the old school coach wasn’t keen on.

Nevertheless, Falcao made his football debut for Sao Paulo in their opening game of the Campeonato Paulista against Ituano on the 20th January 2005. The roar from the crowd when he came off the bench late in the second-half was an indication that he had the fans on his side, even if his manager was still skeptical about the experiment. It was a promising start for the 26-year-old who was used on the wing by Leao, who had told him to dribble and beat players, something he was famous for doing on the futsal courts across Brazil. Sao Paulo ran out 4-2 winners and but for a fine save from Ituano goalkeeper Andre Luis, Falcao could have had a goal to mark his debut. He left the field to standing ovation from the home fans.

In the next game against America, Leao appeared to give in to the baying crowd who were desperate to catch another glimpse of Falcao in the Tricolor shirt. With his side 2-0 up the Sao Paulo boss eventually gave the crowd what they wanted, but there was little time for Falcao to impress. It was a similar story four days later back at the Morumbi as he made a cameo appearance from the bench in a 2-0 win against Internacional. The marketing gimmick was working though; the fans were lapping it up, much to the annoyance of Leao. When Falcao didn’t feature against Uniao Sao Joao the Sao Paulo fans made their feelings known by jeering the decision to play Luizao instead.

Leao claimed that the former futsal star had failed to impress in training in the week leading up to the match and that he was still some way off being ready for the demands of regular football. These thoughts were echoed by right-back Cicinho who told local TV; “we’re trying to help Falcao in this transition. He is a very good player and is difficult to be marked. But what is difficult for him is the physical part. He still needs to learn some things, I’m sure he will adapt well.”

Falcao continued to make cameo appearances but with Sao Paulo leading the Campeonato Paulista, the novelty for fans was wearing off. The calls from the stands for Leao to bring him off the bench had all but disappeared; they had more important things to think about now. Falcao made his first and only start in the final game of the Campeonato Paulista, with the title already won he started the game as a striker in the absence of Diego Tardelli. However, he lasted just 45 minutes and was replaced by Vélber at half-time.

The football dream was over for Falcao, and despite Leao’s departure at the end of the Campeonato Paulista, he announced that he was returning to futsal on the 19th April. “I was elected the best futsal player in 2004. But with the situation the way it was, my image was being tarnished,” he told local radio. He didn’t waste any time in making his feelings known about his relationship with the now departed Leao, saying; “he only opened his mouth to speak evil of me.”

While his switch to football may have been harder than he had imagined, his return to the indoor game was seamless; a year after walking away from Sao Paulo, Falcao won his second futsal world player of the year award. Alessandro Rosa Vieira will never be known as a football legend, he’ll just have to settle for being the Pelé of futsal instead.

(Falcao announced his retirement from international futsal in March following a disagreement with the Brazilian federation.)