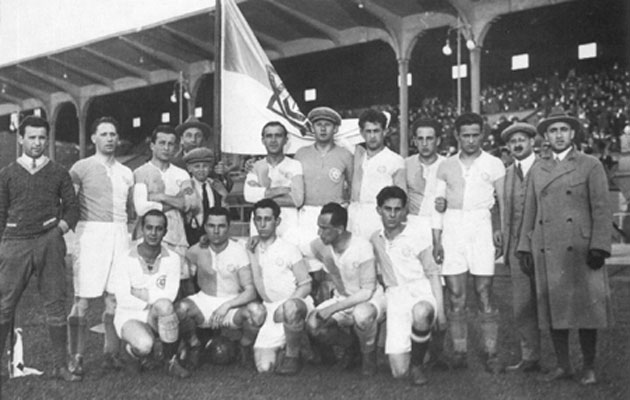 The club was founded in 1909 by two prominent Jewish businessmen, Fritz Löhner-Beda, the famous librettist, and his friend Ignaz Herman Körner, a dentist. The duo had been inspired by the speeches of Zionist speaker Max Nordau, who had called for Jewish people to embrace sports and athletic pursuits in order to challenge the negative perception of Jews.

Nordau’s philosophy was dubbed Muscular Judaism and it caused a mini-revolution in early 20th Century Jewish society. It was in homage to this philosophy that Fritz and Ignaz named their new club Hakoah – meaning ‘strength’ or ‘power’ in Hebrew – Wien.

Hakoah started out not solely as a football club, but as a place where Jewish people could partake in a range of sports from wrestling to fencing to swimming.

Early 20th Century Vienna was enjoying a huge cultural renaissance thanks to large-scale immigration into the area from Eastern Europe. At the time, Vienna’s Jewish community represented around ten percent of the city’s population.

The city’s interest in sport grew in tandem with the influx of people and numerous football and sports clubs sprung up. Amidst in the burgeoning sporting craze Hakoah stood out, becoming an integral part of Viennese Jewish culture. Even Franz Kafka was rumoured to be a fan.

On the football pitch Wien were flying. It took them just eleven years to climb from the fourth division to the first, and another four to claim a historic title in the 1924/25 season.

They won their first title in a rather dramatic fashion. Their goalkeeper, Alexander Fabian, was bundled over by an opposing player, breaking his arm.  Rules at the time prevented substitutions and Fabian was keen to not leave his team at a disadvantage, so he put his arm in a sling and switched places with a striker. Seven minutes later the wounded Fabian found the back of the net; it won Hakoah the match and clinched them the Austrian championship.

Hakoah’s success and unique atmosphere had made them the destination for the era’s best Jewish footballers. Max Gold, Max Grünwald and József Eisenhoffer all played for the club and, in the 1925/26 season, Hakoah lifted their second successive title.

Following their domestic successes Hakoah embarked on a global odyssey, becoming the first football club to embark on a world tour. The team needed a lucrative trip in order to keep themselves in the Austrian league. Fundraising was not the sole purpose of the venture, however; because of the club’s commitment to Muscular Judaism, the tour was also a chance to promote their sporting prowess and gave the club a chance to test themselves against some of the world’s most formidable teams.

The team enjoyed a number of notable achievements on their travels. They became the first foreign side to beat an English team on home soil, the famous 5-1 victory over the mighty West Ham. The Austrian press neglected to mention in their reporting that it was essentially against the Hammers reserve side, but it was still a wonderful moment.

In May 1924 they bested the all-conquering Slavia Prague in their stadium, becoming the first team to beat them on home soil in a decade. They also have the singular glory of being the first Austrian team to play under artificial lights, during a friendly in Paris.

The notion of a global tour may have been unheard of for a football club, but not for Hakoah itself. Other teams within the organisation had already enjoyed successful globe-trotting adventures. Their athletics and swimming divisions had travelled widely, winning a large collection of medals.

Because of the rampant anti-Semitism the team faced they had devised an unorthodox method of protecting their players. The distinguished Hakoah wrestling team would travel with them, acting as personal – and very formidable – bodyguards.

Their adventure took them across Europe, South America, Africa and, of course, the United States of America. The USA tour would prove to be both the club’s high point and its undoing.

A staggering 224,000 people turned out to watch the Europeans over the course of ten matches, the last audience being the record-breaking 46,000 who crammed into New York’s Polo Grounds

That record would stand for another 50 years and it took the arrival of Pelé at New York Cosmos to break it.

American audiences were enraptured by this novel experience; a visit from a foreign team was something of a curio in itself, but a team consisting only of Jewish players was unheard of.

The US crowds were enamoured by the Europeans style; their fast-paced, elegant passing game had not been seen before and received many plaudits. Even the cautious New York Times acquiesced that the Europeans had brought a novel style to their country:

“The manner in which the Hakoah players used their heads to bounce the ball to each other made it plain that soccer is no game for a bald man or one wearing a derby hat.”

Hakoah maintained their impressive performances on the road. In total they won six, drew two and lost two, but it was to be the end of a glorious era. The Wien players became loved America. Free of the anti-Semitism they endured in Europe, nine first teamers transferred to American league sides, including the famous defender Béla Guttmann and the hugely popular Sándor Nemes.

Because of this, Hakoah have also been held up as key figures in the rejuvenation of American soccer. The players that remained in the US were treated as heroes and their exotic European style brought soccer many new admirers. Following the American exodus the club never again achieved the heady heights of the mid-1920s. Back in Austria they fluctuated between the first and second divisions, no longer able to challenge their giant city rivals, Rapid and Austria Wien.

The Nazis were quick to clamp down on Hakoah following the Anschluß. At first the team was suspended before ultimately being shut down, its ground and assets being appropriated by the Reich in 1938.

Seven Hakoah players did not survive the war. Max Scheuer, Hakoah’s legendary captain, fled to France and joined Marseille where he was reunited with team-mate Friedrich Donnenfeld. Following the occupation, Donnenfeld evaded capture and joined the Resistance. Scheuer was less fortunate; he was apprehended while trying to flee to Switzerland and executed.

Oskar Grasgrün, Ernst Horowitz, Josef Kolisch, Erwin, Oskar Pollak, and Ali Schönfeld were also murdered by the Nazis. Co-founder Fritz Löhner-Beda died in Auschwitz in 1942; stricken with illness he was beaten to death by a guard for not working hard enough.

Post-war Vienna’s Jewish population had been all but wiped out and the club was in tatters. Hakoah struggled on for four more years before voluntarily closing its doors in 1949, seemingly for the last time.

At the turn of the new millennium the Jewish community in Vienna managed to obtain the lease for the club’s old grounds thanks to US pressure on the Austrian government. Five years later bought the land outright for €10 million.

A day shy of the 70th anniversary of the Nazi takeover the club re-opened its doors under the name Maccabi Wien. Still sporting their traditional blue and white and bearing the Star of David, they are yet to reach the heights of their predecessors and currently play on the fringes of the Austrian lower leagues.

After a tour of Germany in the early 1920s a prominent newspaper commented that, “Hakoah had helped to do away with the fairy tale about the physical inferiority of Jews.” Its founders had set out with a vision and they had achieved it. Not only that, they had forever changed the way football clubs marketed themselves internationally.

In 1927 – the year after Hakoah had set off on their world tour – teams from Austria, Czechoslovakia, Uruguay, Palestine, Canada and Ireland all embarked on their own global travels, inspired by the unique vision of Hakoah Wien.