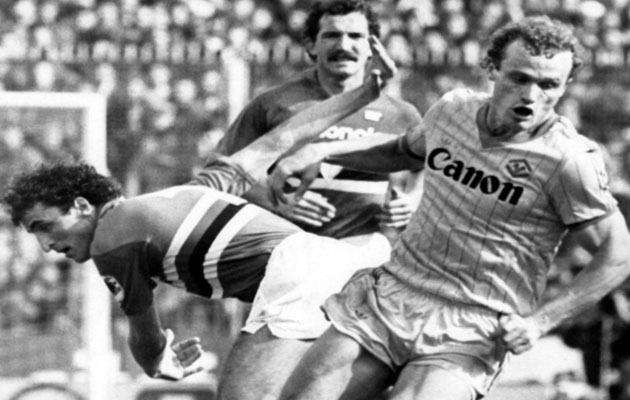 Thirty seasons ago, Hellas Verona won their first and to date only scudetto and most of Italy celebrated. After all, this was not just a victory for a shrewd manager who had molded a group of talented individuals into an excellent cohesive unit, nor was it simply the standard feel-good reaction to the triumph of an underdog. When Verona lifted the Serie A title in May 1985, this was a victory for transparency, egalitarianism and hope of a cleaner future for the Italian game.

Corruption has contaminated many aspects of Italian society for centuries. There tends to be a deep distrust of authority on the peninsula – an astonishing 89% of respondents to the 2013 Transparency International Global Corruption Barometer considered Italy’s political parties to be corrupt – and the prevalent attitude is one which believes that rules are there to be bent.

‘Italian football is a cynical world’, wrote John Foot, author of Calcio: A History of Italian Football, ‘where fair play is rare and often frowned upon. This is not the fault of the current crop of players, managers or presidents, but the historical and cultural product of a world view that permeates Italian institutions of all kinds’. In Italy, winning is everything, and the only bad form of bribery is the one that gets caught.

In March 1980, a mere three months before Italy was due to host the European Championships, a match-fixing scandal engulfed the country. A betting syndicate that had been paying players to rig results was uncovered by the Guardia di Finanza; 33 individuals were charged with fraud, and Milan and Lazio were automatically relegated to Serie B.

One of the reforms that resulted from the ignominy concerned the selection of referees: for the 1984-85 season, it was decided that they would be randomly assigned to matches each week, rather than being selected by a commission. The move was welcomed by those desperate to improve Italian football’s image, and it was hoped that the change would lead to a fairer and more equal championship, with the opportunity to nefariously influence the match official selection process completely shut off. In the two decades previously, the Serie A title had been won only once by a team from outside Milan, Turin and Rome, but perhaps, many thought, this season would be different.

Verona had spent much of those twenty years yo-yoing between the top two divisions, but were beginning to establish themselves as a bona fide Serie A side in the early 1980s under the tutelage of Osvaldo Bagnoli. The coach from Milan guided the Gialloblu back into the top-flight in his debut campaign of 1982, and then led Verona to a historic fourth place finish on their Serie A return. They also reached the Coppa Italia final that year, repeating the feat in 1984, and there was little doubt that the club from Veneto would retain their Serie A status for another year going into the 84-85 season.

As it turned out, they did much more than that. Bagnoli had assembled an impressive team in his first three terms at Verona, adding to the squad each summer without ever losing sight of the importance of the collective. Ahead of the scudetto winning campaign, Hans-Peter Briegel, a tough-tackling German midfielder, arrived from Kaiserslautern, and striker Preben Elkjaer was signed from Danish outfit Lokeren. Elkjaer, in particular, was a fantastic coup, arriving off the back of an excellent tournament at the Euros in France and with a domestic scoring record that bettered a goal every other game. The pair joined a squad of players who seemed to complement each other extremely well: this was not a team thoughtlessly thrown together, but one that was the result of astute and meticulous planning.

When Verona hosted Napoli at the Stadio Marcantonio Bentegodi for the opening game of the new season, the attention was firmly on the visitors. Diego Maradona had just arrived in Naples for a world record £5m fee, and there was a feeling that the Partenopei would challenge the Juventus of Platini, the Roma of Falcao and the Inter of Rummenigge for the title. Verona, though, ensured Maradona would not enjoy a winning start to life in Italy with a 3-1 victory, Briegel man-marking the Argentine out of the game and opening the scoring himself with a towering header from a corner.

The tone for the season was set, and Verona would not lose for fourteen games. Juventus, Fiorentina and Torino were all beaten, and creditable 0-0 draws with Milan, Inter and Rome evidenced the Gialloblu’s solidity and ability to grind out points when not at their best. Verona eventually succumbed to their first defeat in January, going down 2-1 to Avellino, but they were soon back on track, a thrilling 5-3 win at Udinese dispelling doubts that Bagnoli’s side did not have the experience or staying power to remain competitive at the top. Even then, however, most observers expected Verona to fall away before the season’s end, and talk in the new year was more of potential UEFA Cup qualifiers than title winners.

Were it not for the fact that they were a provincial side who had hitherto never come close to lifting the scudetto, Verona would surely have been considered the bookmakers’ favourites at this point: Bagnoli had created a truly exceptional unit, each player fully aware of what was required of him. Employing a fluid formation which morphed between 4-3-3, 3-5-2 and 4-4-2 depending on the phase of play and circumstance of the game, Verona were masters of containment, happily ceding the ball to the opposition but keeping them away from their penalty area through an organised and compact shape. By sitting deep and not pressing high, moreover, Verona drew teams onto them, opening up space in the opposition’s half into which they could counter.

It is impossible to pick out a standout individual in a team that worked so well together. Claudio Garella, both agile and physically strong, kept goal behind a defence that consisted of libero Roberto Tricella and Silvano Fontolan in the centre, right-back Mauro Ferroni and Luciano Marangon, who bombed forward to provide width on the left.

The other flank was covered by Pietro Fanna, the speedy right-winger relied upon to carry the ball forward from deep, while in the middle, Briegel and Domenico Volpati held their positions, broke up play and fed Antonio Di Gennaro, the creative playmaker. Up front, Elkjaer and Giuseppe Galdersi contributed twenty goals between them, one more than Verona conceded that season, making them the meanest defence in Serie A.

Following that 5-3 win in Udine, Verona went on to collect six points – in the days of two for a win –  from four tough games with Juventus, Inter, Roma and Fiorentina, and a 3-0 defeat of Cremonese and 1-1 draw against Sampdoria left the Gialloblu six points clear with six games remaining. When Torino – along with Inter, Verona’s closest challengers – secured a vital 2-1 victory at the Bentegodi, it seemed that the momentum was shifting, but Verona went undefeated in their final five games, and landed a scarcely believable scudetto win with a 1-1 draw at Atalanta after their rivals had slipped up elsewhere. Hellas Verona were, unthinkably, champions of Italy.

For many, it was no coincidence that a smaller side had won the league as soon as the system for selecting referees was no longer open to abuse. Juventus have never shaken off their label as the team of the establishment, and there had been enough controversial moments in the Bianconeri’s three title wins in the early 1980s to prompt questions of the authorities’ partiality.

The notion that Juventus and Italy’s other traditional powerhouses had historically been recipients of favourable treatment was invigorated when, under pressure from the major clubs, the Italian FA decided to return to the former arrangement of referee assignment for the 1985-86 campaign, when match officials were appointed by a commission once more. Verona won the league in 1985, the argument goes, because for one year only the race was fair, clean and nonpartisan.

It would, however, be a great disservice to simply attribute Verona’s stunning achievement to the randomisation of the assignment of referees. Juventus were not victims of any particularly bad decisions in 1984-85, and their lowly final position of sixth was probably down to the distraction of the European Cup; fellow pre-season favourites Roma, meanwhile, were never able to recover from a dreadful start to the campaign, when they went eight games without a victory. Verona lost just twice all season and their points total of 43 was identical to that of the previous two champions, making it likely that this team would have won the league in any other year.

The Gialloblu’s admirable triumph was fully deserved yet remains perhaps the biggest shock in the history of Italian football. ‘Just because you can explain it’, the English author Terry Pratchett once wrote, ‘does not mean that it’s not a miracle’.