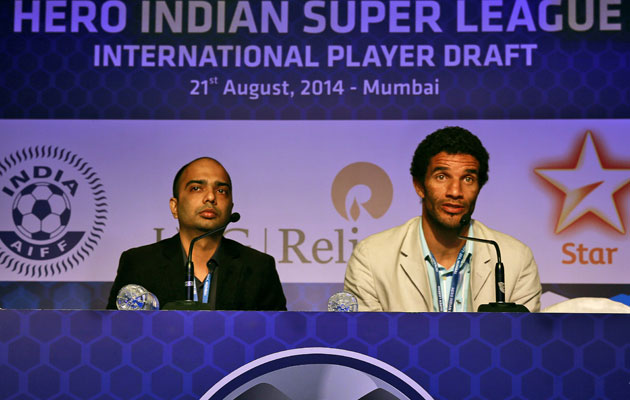 If you’re anything like me, and my deepest sympathies if you are, then you secretly hanker for a return to the mid 90s – when Serie A was a mystical land filled with technically superior football players, Premier League teams were made up of home grown talent augmented with the occasional foreign superstar and you could happily walk down your local high street with your Diablo and no-one would tell you to ‘cut your hair and grow the hell up’.

The Hero Indian Super League (well it’s no more ridiculous than The ‘Well-Known International Bank English Premier League’ now is it?) kicks off next month for the first time in its history.

The league will run from October to December and operates on a franchise system similar to the ones used in US sports.  Players are assigned by draft, with the eight competing franchises required to have 14 Indians, 7 foreign players and one ‘marquee’ signing in place to make up their squad.

Raul, Michael Owen and Thierry Henry all rejected the chance to be involved but into the league have come Galácticos from yesteryear such as Alessandro Del Piero, David Trezeguet, Robert Pires, Nicolas Anelka, Freddie Ljunberg, Joan Capdevila and Luis García (the extraordinarily talented but somewhat inconsistent one who won the 2005 European Champions League with Liverpool).

Peter Reid, the man who enjoyed perhaps the best view of Diego Maradona’s second goal against England in 1986, has been signed up to manage Mumbai City, Brazilian legend Zico will take the reins at FC Goa while David James has been appointed Galáctico player manager of Sachin Tendulkar’s Kerala Blasters.

In a country so heavily obsessed by cricket, Tendulkar’s involvement in raising the league’s profile will not be an insignificant one.

The question is: will this all help to bring in the fans?

Last year attendances in the I-League, the top division of football in India that will continue alongside the Super League this season, averaged just 5,618 per game, with only two of the league’s 13 clubs attracting an average of more than 10,000 spectators.

While those figures are far from impressive the 2013 Kolkata derby between Mohun Bagan and East Bengal actually attracted 80,000 spectators, in a stadium capable of seating some 40,000 more.  Invariably the quality of football on display in the I-League in recent years has meant poor attendances are perhaps unsurprising and indeed the practicality of the I-League continuing to function in tandem with the Indian Super League must now be a matter of debate.

It will take some time to create a truly competitive domestic Indian league but the signs are encouraging.

By taking the best of the US system (the draft) and marrying it with the best of the early days of the English Premier League (top class imports inspiring home grown talent) Indian football is surely taking its first steps in the right direction.

The trick now will be to keep the momentum going.