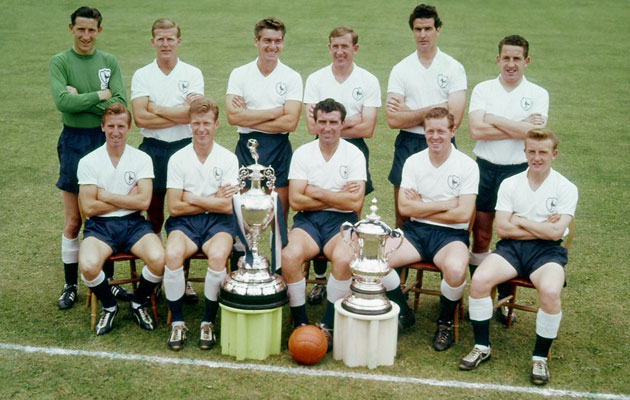 North London, July 21, 1964. That first day of Spurs pre-season training was a casual, almost disorganised affair: team photos at White Hart Lane, Dave Mackay running up and down the terraces to rebuild his broken leg, the schoolboys and girls waiting outside the gates to grab a word with their heroes. After training my dad played tennis with Terry Medwin in the indoor ball court, because he always had enough energy left to power a small town, and Terry needed help with his injury rehab. While all that was going on Cliff Jones, Dad’s accomplice in many a prank, drove off with his trousers.

Dad was planning on a game of golf but had to drive home first to collect a new pair. The sky turned black, he had no one to partner him, but he still went ahead. It was all part of a chain of causes leading to something that would normally be preposterously unlikely; a thunderstorm that left my mum widowed at 21 with two kids under two, and the future of Spurs fragmented like a plane falling apart in the air. He had been an essential part of Bill Nicholson’s all-conquering Double-winning side; now Danny Blanchflower was at the end of his playing days and Bill had just told my dad that he was going to build the new Spurs round him. That stormy midsummer afternoon has always been one of the great turning points of the club’s history.

This week it’s the 50th anniversary of that day. In a gallows humour frame of mind, you could call the freakish way John White died, playing golf on his own at Crews Hill, sheltering from the storm under a tree and killed by a bolt of lightning, the ultimate Spursy way to exit this planet.

And then there’s the irony. The fact that my dad’s nickname was the Ghost. Why the Ghost? Because of how he looked – pale and insubstantial. Because of how he played. He was elusive. He knew what was going to happen before everyone else. You’d think you had him in your sights and then you looked again and, whoosh, he’d vanished. Just like a ghost. He was a futuristic kind of player that the fans barely appreciated at first, because they couldn’t see what he was doing. Nor could defenders. He was impossible to man-mark.

I was just five months old when it happened, and it’s always been one of those immense frustrations, that I was around but too young to know anything about him, to have seen him play, to have witnessed his unique talent for myself, not just avidly consumed brief clips from Pathe News. But I know from what people have told me and from the many words written about him that he was modest, generous, dedicated, mischievous and likeable. And he had an irrepressible joy in life. People who knew him, when they talk of him they smile.

When I was growing up I often had this sort of weird sense that my dad was still with me, someone to be asked in spirit what I should do about something. Part of growing older has been that I don’t need that security blanket any more. Since I wrote about him in The Ghost of White Hart Lane, I’ve felt his presence less, and I’ve been thinking that maybe that book did literally lay The Ghost. But there’s still the occasional nudge from him that he’s around – the part of him that played practical jokes, the jester who specialized in weird serendipitous happenings.

This, for instance. While I was working on my book, I went to Gullane in Scotland – the country of Dad’s birth – for an early round of golf on my own. The receptionist asked for my mobile number and I asked her why. ‘It’s just in case there’s some sort of emergency,’ she said. ‘Like, say, you were struck by lightning.’ There’s no answer to that.

And this. A couple of years back, we arranged for a memorial plaque to be set up for him at Crews Hill. They sent me the wording they were about to get engraved:

In Memory of The Ghost of White Hart Lane

Struck by lighting, whilst playing this hole

All glory comes from daring to begin.

Struck by lighting. I spotted it in time to get it changed. But he would have loved that, the image of death by standard lamp.

Alloa was my dad’s first pro team and now and then when I go and see my family in Musselburgh (John’s older brother Eddie, and his kid sister Janette still live there) I pay the club a visit. I like it there. Though it has obviously changed since 1956 it hasn’t undergone the massive transformation of Falkirk, where the old Brockville stadium is now a supermarket and car park. White Hart Lane is hardly recognizable from the days when Dad played there. But at Alloa I’m looking more or less at what he would have seen – one end where a goods train goes past, a stand with no roof and crumbling, old-fashioned steps, the Ochil hills in the distance. It’s comforting, looking at it, and sometimes I think we carry inside us the imprint of sights and sounds experienced by our forebears. Somewhere like that would have been a real fond place for my dad and I’ve kept a bit of that fondness somewhere in my heart.

It’s run by football people who are totally passionate about the game in a way that is completely the opposite of the modern plc mindset. They haven’t got much but they’ll give the fans what they’ve got. The Scottishness of the whole thing, the humour, the hospitality, really resonates deeply with me.

In March I was there for Alloa v Falkirk. My dad’s two Scottish clubs, both now in the Championship. Alloa were on a bad run, Falkirk pushing for promotion. Alloa won 3-0. It was the game that kept them up. And I met Lawrie, a guy around my age whose dad grew up five doors up from the White boys in Links Street, Musselburgh. He’d brought along an older cousin who had vague memories of John, Eddie and Tommy.

I’m just chatting away to him at the bar and I say, ‘What do you do for a living?’

He gives me a strange look and says, ‘I knew this was going to come up and I’ve been dreading telling you. Basically I fit lightning conductors.’

I was going to end this article there, suddenly, which I guess is a bit like Dad’s life. But it would be a shame to leave it like that. John White was part of the golden generation of Scotland players, and part of the best midfield of the twentieth century. He cost Spurs £20,000 from Falkirk in 1959, and you have to wonder what he’d be valued at this summer if Real came calling for him to join Modric and Bale. Would I have liked him as a modern player? Wouldn’t everybody? I’m massively biased, of course, but I don’t even think of him as modern. He’s timeless – a Cruyff, a Best, a Pele, the one you build a side around, not a component but a complete original, unrepeatable, irreplaceable. There should be a White in that pantheon but there isn’t because he was stolen, just turned 27, on the brink of reaching his prime.

It’s easy to put a dead person on a pedestal, just to console yourself for their being dead, but 50 years on my dad remains held in such high esteem that when his name comes up grown men and women still get a wistful look in their eye. And when his image is shown on the White Hart Lane Jumbotron 35,000 people, most of whom weren’t born when he played, stand up and cheer John White, the Ghost, to the skies.