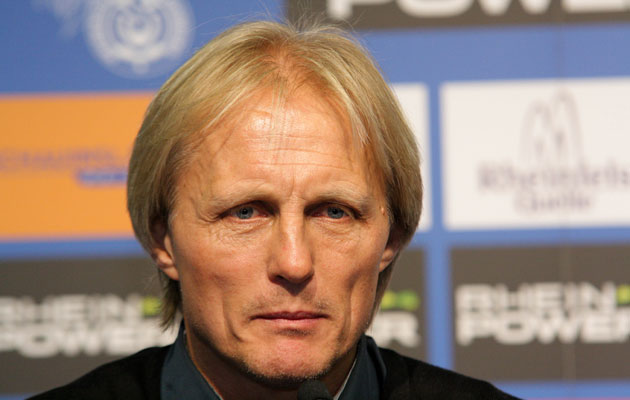 While not always the colourful, quinto-continental spectacle it is today, since its inception in 1963, the Bundesliga has always had its fair share of gifted foreign players.

In the 1960s, Petar Radenkovic, the singing Yugoslav goalkeeper – his Bavarian smash hit “Bin i Radi bin i König” sold more than 400,000 copies – and his compatriot midfield wizard Zeljko Perusic led 1860 Munich to the title, while Austrian Wilhelm Huberts and Josip Skoblar (another Yugoslav) scored goals galore for Eintracht Frankfurt and Hannover 96 respectively. The following decade, as both West German clubs and the national team approached their historical peak, two great foreigners – first Allan Simonsen at Borussia Mönchengladbach, then the similarly diminutive Kevin Keegan at HSV, won the Ballon d´Or (the Mighty Mouse even won it twice, just for good measure) – while Swede Ronnie Hellström excelled in goal for Kaiserslautern and Japan´s Yasuhiko Okudera struck a blow for the land of the rising sun by winning the league title with Köln.

The 80s began with the legendary Korean Cha Bum-Kun – later voted his continent´s greatest ever player – becoming the first Asian to win a European trophy as Eintracht Frankfurt lifted the Uefa Cup; Belgian custodian Jean-Marie Pfaff and Danish Dynamite Man Sören Lerby were key components in a typically dominant Bayern side and Rune Bratseth was anointed the Bundesliga´s best libero by none other than the position´s inventor, Kaiser Franz himself.

Great as these players indisputably were though, one honour eluded them all: that of topping the West German goalscoring charts.

For twenty-seven seasons, the title of Torjägerkanone was the exclusive realm of West Germany’s own. Some were bona fide legends of the game – Gerd Müller, Karl-Heinz Rummenigge, Rudi Völler – others were honest toilers of less extravagant ability – Johannes Löhr, Horst Hrubesch, and Stefan Kuntz – and at least one was a sensational flash-in-the-pan – Lothar Kobluhn, a nominal defensive midfielder who somehow contrived to score 24 goals for struggling Rot-Weiß Oberhausen in 1970/71. The one thing they had in common, though, was that they were all Germans. Then, in 89/90, a season that would end in World Cup glory for West Germany, a lanky, fair-haired Norwegian came along. His name was Jørn Andersen.

Born in the same year as the Bundesliga – 1963 – in the coastal town of Fredrikstad, sport was in Andersen’s genes.  His mother, Björg, had been an international handball player and represented her country at three World Championships during the Seventies.  Beginning his career at local club Östsiden, whose other famous son, Egil Olsen, would lead Norway to consecutive World Cups and briefly to second in the Fifa rankings during the 1990s (and would also, ironically, permanently exile Andersen from the national team), he joined cross-town rivals Fredrikstad FK in 1982, and set about establishing himself in the top-flight.

FFK belong among the aristocracy of the Norwegian game – between the early 1930s and the mid-60s, they won both the League and the Cup nine times and, in 1960/61, were the first side to represent the nation in the European Cup, remarkably defeating an Ajax side featuring Sjaak Swart, Henk Groot and Bennie Muller in the first round, but by the early 80s they had fallen on hard times and were a struggling side. Thus, the young striker found goals hard to come by, and in his second season there the team was relegated.  They would not return to the top-flight for eighteen years.

The ambitious Andersen felt he couldn´t follow the club down to the second division, so moved to the capital and signed with reigning league champions Vålerenga. There, he came under the tutelage of Swedish coach (and Roy Hodgson disciple) Olle Nordin – who´d later become an object of ridicule after his Sweden side suffered three consecutive 1-2 defeats (to Brazil, Scotland and, most infamously, Costa Rica) at Italia 90.

Vålerenga could not retain their title, but that certainly wasn’t Andersen´s fault: he found the back of the net 23 times to top the national goalscoring charts, which obviously attracted the attention of scouts from foreign shores. After only a year in Oslo, the striker joined FC Nürnberg for a fee of 200 000 D-mark, alongside compatriot Bjørn Gulden.

While it would be wrong to say that the Norwegian set the Bundesliga alight upon arrival, he quickly gained a regular starting spot up front and did his job as Nürnberg finished 12th – admittedly only one point ahead of Dortmund in the relegation play-off spot, but still more than acceptable for a newly promoted side.

As it happened, the club captain at the time was hard-nosed defender Anders Giske – the first Norwegian to wear the armband for a German side since the legendary Asbjörn Halvorsen at HSV in the 1920s – who did a valuable job in assisting his compatriot´s integration into the team.

In his first full season, Nürnberg climbed to ninth, with Andersen as their most effective marksman on 14 goals. Equally importantly, he had by that time done what any young man with money to burn would do: he´d bought himself a fancy car, opting for a gleaming Mercedes cabriolet which, courtesy of a prohibitively high import tax, would be unavailable to anyone but the very wealthiest in his homeland at the time.

When his new wheels weren´t running as smoothly as expected, the car had to be handed in for maintenance. Now, at the Mercedes offices in Nürnberg there was a receptionist called Ulla. Jörn found that he liked her, and it also appeared that she quite liked him, so he suggested that they should start going steady. By the time of the striker´s career-defining move to Frankfurt in summer 1988, they were married, and Ulla gave birth to a baby boy they called Niklas, who´d later go on to represent the German U-20 side and these days plies his trade as a left-back with Wattenscheid in the Regionalliga West.

The 87/88 campaign was a highly successful one for Nürnberg as they finished the season in fifth place, their highest league position since lifting the Meisterschaale twenty years previously.

Still, finding his services in demand, Andersen opted to sign for Eintracht. Initially that decision appeared to be a rather unwise one, as his new team struggled and only retained their first-class status through a play-off with Arminia Bielefeld.

The next season, however, new players – including the criminally underrated Uwe Bein (who´d go on to enjoy a fine World Cup the following summer until an injury sustained in the quarter-final v Czechoslovakia put him out of action) – were brought in to add quality to the team, and suddenly the fair-haired Norwegian exploded into life, scoring goals right, left and centre as Frankfurt powered to a third-place finish, thus ensuring qualification for the Uefa Cup. Andersen’s final tally of eighteen was three more than closest challenger Stefan Kuntz (Kaiserslautern) – thus, the spell was broken: a foreigner had finally been crowned Bundesliga´s Torjägerkanone.

At the age of 27, and with a monumental achievement to his name, the forward from Fredrikstad was at the peak of his powers, which makes what happened next seem implausible, downright bizarre.

Like any ambitious footballer of his era, Andersen´s ultimate (and publicly stated) goal was to play in Serie A. In Genoa, the wily Oswaldo Bagnoli – who, five years previously, had steered  Verona to a sensational Scudetto with another Scandinavian marksman, Preben Elkjär, leading the line – was sitting ready by the fax machine, cheque book in hand. Only problem was that a World Cup took place that summer and that Bagnoli had access to a television set. Thus, he got to see a burly Czech by the name of Tomas Skuhravy put his head to good use and score five goals. Abruptly, Bagnoli changed his mind, and Andersen´s Italian adventure was over before it had begun.

In retrospect, it´s hard to find fault with Bagnoli´s decision, as Skuhravy would go on to score almost sixty league goals for Il Griffone, while also helping his new side reach the semi-finals of the 91/92 Uefa Cup.

Meanwhile, having already served Eintracht notice that he would not be returning to play for them the following season, Andersen humiliatingly found himself without a club, and, with the new campaign fast approaching, left with no choice but to agree terms with any side that would employ him. That side turned out to be promoted Fortuna Düsseldorf, but his time there was so utterly miserable that he did in fact return, tail between legs, to Frankfurt after only one season.

At the Waldstadion, however, he found that things had changed. When he left, the club, naturally, had signed someone else to replace him, and that someone else was a powerful young man who had impressed them by scoring twice and creating all kinds of trouble during that play-off game v Bielefeld two years previously. His name? Anthony Yeboah. Although he had some difficulties adjusting the style of his new side during his debut season, the Ghanaian was already firmly established as a cult hero at Eintracht, the racist taunts that had accompanied his early outings for the club gradually giving way to excited chants celebrating his exuberant, unpredictable performances.

To this day, many Frankfurt fans will happily identify themselves as Zeugen Yeboahs – Yeboah´s Witnesses. So, merely a year after seemingly having had the world – or at least the Waldstadion – at his feet, Andersen found himself playing second fiddle to another striker. To his credit, he took that challenge in his stride, scoring nine goals to augment Yeboah´s fifteen as the team – by now also featuring home-grown returnee Andy Möller in attacking midfield – enjoyed another fine season.

Alas, the 91/92 campaign would end in heartbreak for the Eagles. On the final day, they travelled to relegation-threatened Rostock – one of the two former East German sides that had been incorporated into the Bundesliga following reunification – knowing that a win would almost certainly secure the title. Implausibly, however, they lost 2-1, the Rostock defender Stefan Böger netting the decisive goal – which still did not save Hansa from the drop – in the final minute. Thus, the Meisterschaale went to Stuttgart instead.

And with that, Andersen´s career went into permanent decline. Exiled from the national team, he could only watch as Egil Olsen´s Norway undertook an implausible journey during which they qualified for the 1994 World Cup by beating the Netherlands and England, while at club level, he went from Frankfurt to Hamburg to Zürich and Lugano in Switzerland, never again finding the net on a regular basis.

Upon retirement, he returned to Germany, trying to carve a niché for himself as a coach. His postings include Rot-Weiß Oberhausen, Skoda Xanthi in Greece, Kickers Offenbach, Mainz – where he replaced an upwardly mobile fella going by the name of Jürgen Klopp – Larissa (Greece again, his second spell there lasted for 23 days) and Karlsruhe. He´s also claimed he was approached by the German Federation to become assistant to Jogi Löw with the Nationalmannschaft – Löw himself later corroborated this story – only to ultimately fail to nail down the job due to his nationality. In short, it never quite worked out for him.

Nonetheless, he´ll always have that 89/90 season, when he could do nothing wrong, and opened a path on which future foreign Torjägerkanone such as Yeboah, Ebbe Sand, Sergej Barbarez, Ailton, Theofanis Gekas, Edin Dzeko, Robert Lewandowski and many more would later gratefully tread.