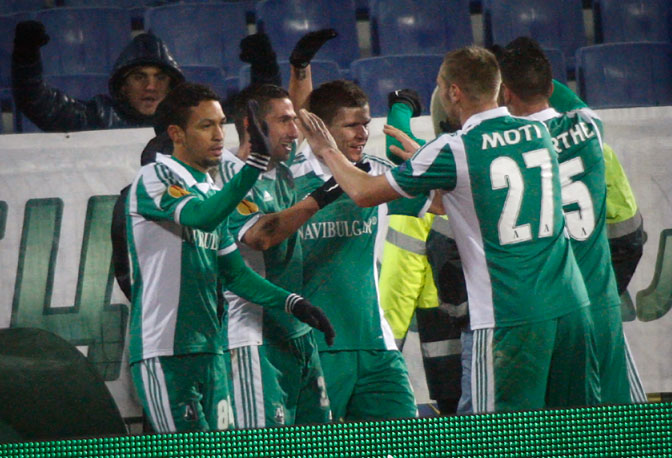 Ludogorets Razgrad have been the talk of Bulgarian football for a while now, but their impressive Europa League exploits this season has now made the rest of Europe aware of their meteoric progress.

Grouped with PSV Eindhoven, Chornomorets Odesa and Dinamo Zagreb, Ludogorets blew away the competition, ending the campaign with five wins and one draw. Not bad for a team founded just over a decade ago.

Formed in 2001 as Ludogorie FC, they were renamed the following year as Razgrad 2000, after merging with an established youth team. Despite winning the league in consecutive seasons, they did not have the requisite finances in place to progress to a higher division until the 2005-06 campaign, which they also won. Since then, they have steadily progressed and continued their upward trajectory, reaching the second division in 2010.

This achievement corresponded with the club acquiring the rights and adopting the moniker of Ludogorets Razgrad, who were formed in 1945 and folded in 2006. They were also purchased by successful businessman Kiril Domuschiev and subsequently secured promotion to the top flight at the first attempt.

A raft of new signings were brought in to enable a seamless transition and Domuschiev also adopted a bullish stance towards the increasing number of critics that were questioning his club’s methods.

“We’re breaking out of the status quo,” he claimed. “There are a lot of clubs that are not developing in the right way. And when someone sees a mechanism well maintained, working as it should, it excites envy and tension. My expectations are for an upright championship, support from the other clubs, and a fair play.”

Ludogorets commenced the season with a nine-game unbeaten run and entered the winter break in first place. They were eventually pegged back by CSKA Sofia and faced them on the final day of the season two points adrift. Ludogorets took an early lead and despite concerted CSKA pressure, hitting the bar twice, they managed to hold on to secure the title. Added to this achievement, they also claimed the treble, winning the Bulgarian Cup and Bulgarian Supercup, beating Lokomotiv Plovdiv on both occasions.

They failed to match this historic feat last season, but did retain their title and experienced the Champions League qualifiers, going out in the second qualifying round to Dinamo Zagreb. This year they progressed a couple of rounds further but were knocked out in the play-off stages by Basel, but have blitzed the group stages of the Europa League.

With eight wins in European competition already this year, including four away from home, they now face a beatable Lazio side in the last 32. They also returned to the top of their domestic league at the weekend by winning 3-0 at Neftohmik, establishing a three point lead over Litex Lovech in the process.

Should they defeat Lazio, they are sure to generate even more attention and also boost Bulgaria’s lowly UEFA coefficient. After progressing so far in such a short space of time, you wouldn’t bet against it.