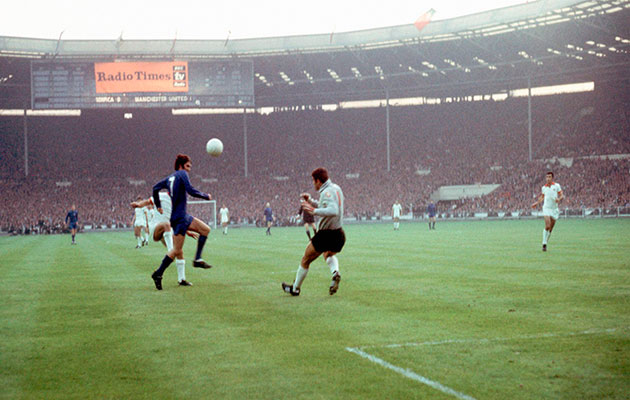 George Best played 470 games for Manchester United. Never did he have to carry the substitute’s number 12. Once – against Sheffield Wednesday in March 1969 – he donned the number 9 shirt. He wore number 10 on 39 occasions and had 8 on his back 43 times. In a total of 141 games, he was number 7, including the 1968 European Cup final win against Benfica, which has served to solidify the perception that it was ‘his’ number. It’s a perception which endures – look at the t-shirt worn by Zinedine Zidane’s son Enzo at his father’s unveiling as Real Madrid manager.

Popular history tells us that it was Best who started the tradition of superstars wearing 7 at United, a lineage taking in Bryan Robson, Eric Cantona, David Beckham, Cristiano Ronaldo and, now, they hope, Memphis Depay. And yet, in 246 of Best’s Manchester United games – more than half – he wore number 11. In his final six seasons with the club, he appeared as number 7 only 32 times and also wore 11 in his time in the NASL.  We stand to be corrected, but we remember that, when Ryan Giggs emerged in the early 90s, one of the reasons he was called ‘the new Best’ was because he wore 11 too (but not always).

While, nowadays, much significance is attached to the shirt and its wearer, this is a relatively recent phenomenon and Best’s inclusion in the Manchester United pantheon is something of a retcon. He wore it sometimes, but generally when he played on the right wing, the position traditionally associated with it. The ’68 win, and his performance in that game, tends to elevate his association with it. In a feature on numbers in FourFourTwo in 2012, the editor of the fanzine United We Stand, Andy Mitten, gave his thoughts on the shirt:

“The 7 wasn’t a big thing at United until Cantona. After all, Ralph Milne wore 7. Cantona was when the press started to make a big deal about the significance. United were happy for them to do that because it added to the legend, it was something else to market.”

One of Best’s successors on the right wing was Steve Coppell, who joined United in 1975 and won 42 England caps, but he generally isn’t included in the ‘star’ bracket. Coppell wore 7 until 1981, and wore it against Tottenham in the League Cup early in 1981-82, when Bryan Robson, newly signed from West Bromwich Albion, wore 11. Coppell missed the next match, against Manchester City in the league, and Robson first wore the shirt with which he would become linked. Not because of any notion that he was carrying on Best’s mantle, though. He wrote in his autobiography, Robbo:

“At West Brom, especially during Johnny Giles’ management, I played in several positions and had a variety of numbers on my back. That didn’t particularly bother me because I just wanted to play as often as possible. Then it occurred to me that my better performances came when I wore the no. 7 shirt and I came to regard it as my lucky number.

“So, when I joined United, I asked if anybody minded my having the number. Steve Coppell, who usually took that number, wasn’t in the starting line-up against City and said he didn’t have a problem with my wish, anyway. None of the lads objected either so the no. 7 shirt was mine.” 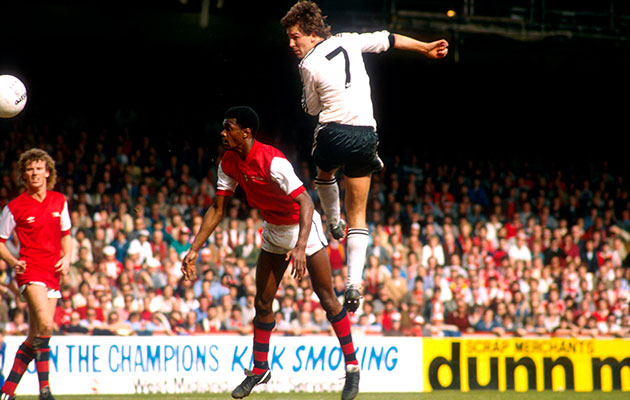 Bryan Robson requested to wear his lucky number 7 shirt when he joined United.

In the late 1980s and early 90s, with Robson often unlucky with injury, the number was donned by a motley crew including Peter Davenport, Russell Beardsmore, Clayton Blackmore, Neil Webb and Andrei Kanchelskis. When fit, however, the captain would always wear it but the signing of Eric Cantona in November 1992 changed things. Cantona’s first match was in a friendly against Benfica, when he wore 10, and then his league debut was as a sub against Manchester City in early December.

When he made his first start, it was as a direct replacement for Robson, with number 9 Brian McClair dropping back into midfield. With Cantona playing a key role, United powered up the table, eventually winning the title. Robson’s only other start that season would be in the final game against Wimbledon, when Cantona wore 11. Squad number were introduced for the 1993-94 season, though, and it was Cantona who was assigned 7 with Robson now 12. In his book, Robson revealed that it wasn’t a problem, seemingly ignoring the ‘luck’ reasoning:

“I didn’t even mind losing the no. 7 shirt to Eric. I knew I would be used a lot as a sub in the 1993-94 season and Eric had already shown his value to the club. We’d won the league in his first season with us and it was obvious he was going to be an important player for quite some time.

“He’d always liked to wear the no. 7 so, that summer, when the boss was working out his squad numbers for the new season, I told him I didn’t mind having a different number. I’d had a great World Cup in 1982 wearing 16, so it wasn’t a problem having 12, 14 or any other number. I was, after all, now a bit-part player for United.”

Robson’s assertion that Cantona always liked to wear 7 is questionable. With Leeds in 1991-92, he only made six starts, wearing number 9 once and, strangely, number 3 once and number 2 on three occasions. Even odder – given that squad numbers were at the time only a major-finals delicacy – in the final game of the season, he wore 14 when playing from the start against Norwich City while Gordon Strachan was sub but still had 7.

Incidentally, Robson did play in all four of United’s Champions League games in 1993-94. Teams lined out in 1-11 in Europe until the end of 1995-96 and in those games, two against Kispest Honved and two against Galatasaray, Cantona wore 9 to accommodate the captain, who left at the end of that season to take over as player-manager of Middlesbrough. 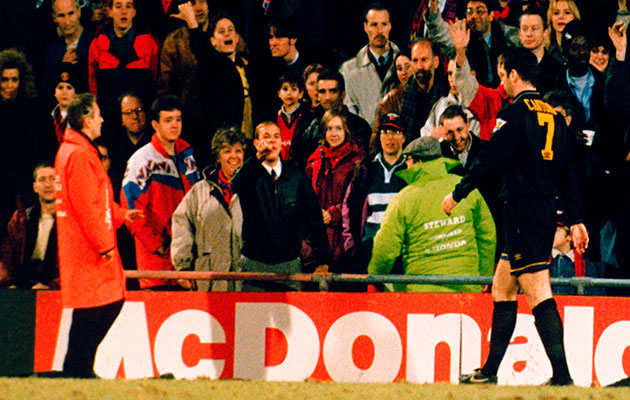 Eric Cantona’s life is about to change after this sending off at Crystal Palace.

Cantona would retain 7 until his retirement after the 1996-97 season, in which David Beckham had worn 10. As we recall it, Teddy Sheringham arrived from Tottenham and sought to wear 10, which resulted in Beckham reluctantly taking 7, but this article takes the view that he always wanted it, while a passage in Roy Keane’s second autobiography also promotes that view. If Beckham did love 7, he didn’t fight hard to wear it. For the 1992 FA Youth Cup final, he wore 6 and in the following year’s decider he had 8 on his back. In 1995-96, United wore 1-11 in games in both the Coca-Cola Cup and FA Cup and Beckham wore both 8 and 10.

Beckham’s 2003 autobiography My Side tells of how he learned he was to become number 7:

“When I first got into United’s first team as a regular, my squad number was 24 [he had worn 28 before that, too]. The following season I was given the number 10 shirt. That meant a great deal to me: Denis Law and Mark Hughes had both worn it before me.

“Maybe the history that went with the number was why I scored so many goals wearing it. I remember, though, the summer we signed Teddy Sheringham, the boss actually took the trouble to phone me when I was away on holiday in Malta to tell me he was taking that squad number off me. No explanation, no alternative and no argument. I remember saying to Gary Neville at the time: ‘What’s he done that for? Why would he phone to tell me that? Did he just want to make sure he ruined my holiday?’

“I was devastated, trying to work out what I’d done wrong. Then, a month later when we turned up for pre-season training, he had a new shirt ready: the number 7. The boss handed me Eric Cantona’s squad number. The surprise of that honour stopped me in my tracks.” 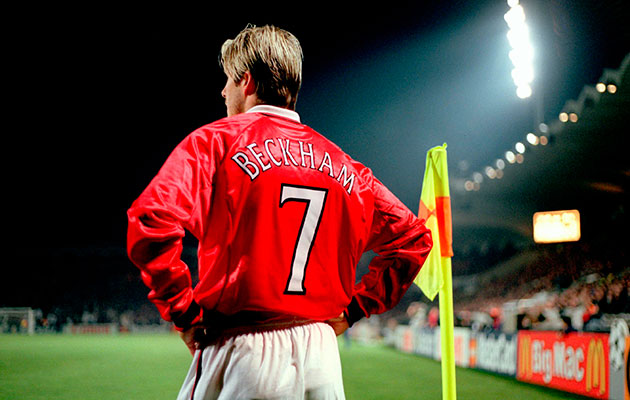 David Beckham was delighted to inherit the shirt previously worn by his idol Eric Cantona.

Elsewhere in that book, Beckham tells of how Robson was his idol but clearly, despite having 10 taken off him and 7 being free with Cantona leaving, it never occurred to him to ask if he could inherit it.  When he departed for Real Madrid in 2003, Alex Ferguson decreed that new signing Cristiano Ronaldo should wear 7 and make it his own, despite the Portuguese teenager’s initial preference for the 28 he had worn at Sporting Lisbon. That Ronaldo now owns the trademark CR7 shows just how much he took to it, even putting up with wearing 9 in his first season at Real before he took 7 when Raul moved on.

Ronaldo’s success in 7 helped to continue the narrative of 7 being the number at Old Trafford, but his successor, Michael Owen, most definitely did not. After he left, Antonio Valencia switched from 25 to 7 for 2012-13, Ferguson’s final season, but vacated it again, believing that a return to 25 would help him regain his form. Whether that was a tacit acknowledgement that 7 was ‘too big’ for him, only he can say, but it’s doubtful that Ferguson would have indulged such a thing, or Luke Shaw deciding to abandon number 3 for 23 after just a season. 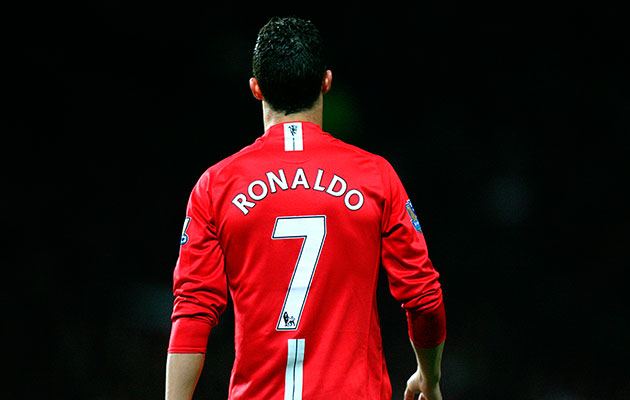 CR7 back when he was just plain Cristiano Ronaldo, wearer of the Manchester United no. 7 shirt.

Angel di Maria, carrying a British record transfer tag, appeared to be a worthy successor to the tradition of the 7, but it turned out to be a transfer which suited nobody. He was replaced by Memphis Depay, who had initially worn 9 in pre-season games before di Maria left. Had Depay kept 9, then perhaps Anthony Martial might have taken 7, with the Frenchman presently looking like a worthier wearer of such a hallowed shirt. But then, how hallowed is it really? Is the Manchester United number 7 legendary, or is the story a legend, based on a series of random circumstances?