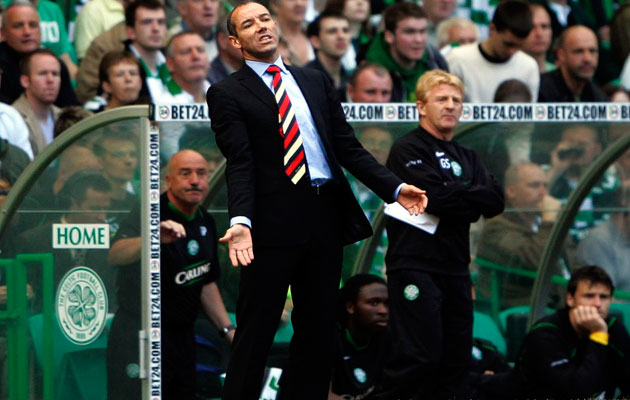 The culmination of the 2005/6 season saw Glasgow Rangers finish, by their own standards, in a lowly third place.

Finishing a point behind Heart of Midlothian and 17 behind historic city rivals Celtic, it was the first time since 1988 that the Govan based side had not finished as either winners or runners up. Overseeing the club’s worst ever domestic run, in which Rangers failed to win in 10 games, was the former Aberdeen and Scotland centre half Alex McLeish. McLeish was lucky to see out the season, his only reprieve coming in the Champions League where Rangers as the first ever Scottish team to do so, qualified for the last sixteen after a 1-1 draw with Italian giants Inter.

Elimination shortly followed, unluckily it must be said, at the hands Manuel Pellegrini’s Villarreal. Exits in both domestic cup competitions added to the tumultuous season and it had become apparent that McLeish’s time was up after four and a half years in charge.

Despite the disappointing season, there was cause for optimism in the club moving forward. David Murray, the Rangers chairman, had announced that the former Lyon coach Paul Le Guen was to be the next manager of the Glasgow giants. Understandably there was a great deal of excitement around the appointment, Murray stating that the capture of the Frenchman was a ‘massive moonbeam of success’ for the club. Although at this point coming to the end of a year’s sabbatical as a French TV pundit, Le Guen had led Lyon to three consecutive Ligue 1 titles whilst guiding them to two Champions League quarter finals in successive seasons.

Naturally this type of footballing success saw Le Guen being highly sought after. Turning down overtures from numerous European clubs including Lazio, Benfica and Fenerbahce he was convinced that Rangers was the correct project for him to continue the next phase of his promising managerial career.

And why not? Rangers were a club with a vast history, a huge fan base and years of success apparent in their trophy room. Despite this, it was still something of a coup for Rangers. The Scottish Premier League was, and still is a league on the decline. Unable to attract high profile players like those who graced the league in the nineties and early noughties, poor grassroots infrastructure directly affecting the quality of footballer produced, it is also burdened by the fact it is (usually) a constant two horse race contested by the blue and green halves of Glasgow.

However, in spite of this, the matching of Le Guen and Rangers had the potential to be a beneficial partnership. Rangers had their sights on regaining the top spot in Scottish football, whilst they hoped for continued European advancement. Le Guen had provided the results to such demands in France, and it was an opportunity for him to prove he was as good as his record suggested by repeating such feats in a different league.

But it didn’t work out like this. Seven months and 31 games later Le Guen left Rangers by mutual consent. The only accolade Le Guen gained was that of the shortest ever reigning manager of the club, and once more Rangers were domestically in the lurch. Again 17 points behind rivals Celtic, Rangers had also been eliminated in the CIS Cup at the hands of St. Johnstone earning the beleaguered Frenchman the unenviable achievement of guiding the side to their first ever exit by a lower tiered team.

It was a curious situation. How was it that Le Guen had failed so spectacularly at Rangers when there appeared to be such opportunity for success? It seemed he had in fact failed to fully understand the mechanisms of Scottish football, revealing a wider ignorance of what was expected of him at Rangers. Similarly, it appeared that Rangers didn’t fully understand what they were getting with Le Guen. It was in a way quite arrogant of Rangers to presume that by appointing an apparent up and coming European manager that footballing success would naturally follow, but not taking into account the changes that he would inevitably try and make.

There was no doubt that Le Guen was a confident man, an air of arrogance quite clearly apparent. Of course it would be wrong to assume that this is always a bad trait. It’s not. And for Le Guen, coming into a club, where English and not French was the first language, was understandable. He had a philosophy to implement, a way in which he perceived that his team should play football on the pitch, but also how they should behave off it.

The first instance of this was the axing of the Dutch defender Fernando Ricksen after a pre-season drink related incident, whilst the bust up and subsequent cancellation of Phil Bardsley’s loan deal showed Le Guen’s footballing values. He had little time for any challenge to his authority; there was to be a certain level of professionalism expected from his players, and if they didn’t toe the line there was to be no place for them at the club.

Eradicating the alcohol and junk food culture of his players became paramount.  Le Guen knew there was little chance of footballing success unless his players adhered to what he perceived to be a basic requirement of the modern day footballer. Unfortunately, his banning of Monster Munch and ketchup did not provide the success he expected.

Despite an impressive opening day defeat of Motherwell, Rangers began dropping points frequently. Defeats against Hibernian and Celtic followed draws against Dunfermline and Kilmarnock, the team putting in one poor performance after another. Le Guen wanted possession orientated football, keeping the opposition from the ball, frustrating them and taking advantage of the gaps and spaces that would inevitably open up as the opposition’s structure broke down in search of the ball.

A ban on tackling during training sessions was meant to improve players techniques for supplementing this system, but Scotland as a nation still thrives on the challenge and it was a ridiculous notion for the Frenchman to outlaw the one aspect of the oppositions game that would be used to break his system down.

The possession philosophy was always going to struggle in the frenetic nature of the Scottish game, frequently being ceased by the opposition quite happily committing fouls to disrupt the flow. Not identifying the rougher, bruising nature of the league’s football was one of Le Guen’s biggest failings and it became easy to stop Rangers from playing.

Clearly forgetting that he was managing a team in the SPL, the Frenchman revealed a level of ignorance of the Scottish game that exposed his own managerial flaws. In central defence, he often rotated between Brahim Hemdani, a defensive midfielder by trade and new signings Karl Svensson and Sasa Papac. All three struggled with the physicality of the Scottish game and it became a common sight to see them being bullied by the standard, one dimensional No.9 target man of the SPL.

Also arriving was the underwhelming Libor Sionko, not to mention Filip Sebo, the striker who couldn’t score. Jeremy Clement followed from Lyon, a technically astute player and one whom fitted into Le Guen’s philosophy easily, but not fancying the rough and tumble of the Scottish game scuttled back to France at the first opportunity. Lionel Letizi was signed on a free from PSG to become the team’s No.1, but the handling of the player epitomised Le Guen’s deluded arrogance towards the team.

A blunder against Dunfermline highlighted Letizi’s inadequacies, but due to injury was replaced by Rangers youth system product Allan McGregor. A serious of impressive performances, not only in the SPL where he was awarded player of the month for September, but also in Europe where he was man of the match against Molde, gained him plaudits from the fans and media alike. Quite bafflingly, McGregor was dropped instantly when Letizi was deemed fit again. Letizi would then go on to make a comical howler against Inverness, gifting them the 1-0 victory.

It summed up Le Guen’s tenure at Rangers so far. Poor management and an unwillingness to change his approach resulted in growing tensions with the fans. Radiating throughout the club, the players began to take issue with the Frenchman. A public spat with captain Barry Ferguson further isolated Le Guen. Describing the captaincy as not being important for the team, it would have been a strange comment to make at any footballing club, never mind one where the captain was a lifelong Rangers fan, lauded and adored by fans.

Le Guen would strip Ferguson of the captaincy, claiming that the Scottish midfielder was undermining him and not acting in the team’s interests. His subsequent appointment of Gavin Rae, a player who spent the majority of his Rangers career on the treatment table was even more ludicrous.

Rightly or wrongly, Le Guen’s style of management had caused a split within the club. There were some who believed that Le Guen needed time, time to cement his ideology and philosophy believing that the changes he was trying to implement could not be expected to happen instantly. Others had enough, citing the poor performances as evidence that Le Guen really had little clue of what was needed to win in the SPL.

Despite positive performances in Europe where Rangers were undefeated, the domestic situation was too far gone to be rescued. Maybe given time, Le Guen could have adjusted and adapted his tactics to suit the Scottish game a little more, but it did not appear the Frenchman had any intention of changing his philosophy. Baffling selections and poor signings did little to endear him to fans, whilst trailing Celtic so miserably was never going to win him any supporters.

The club certainly did not back Le Guen enough in the Ferguson affair, but maybe it was because patience with the Frenchman had already worn thin, the fall out seemingly another issue in a long list.

It was a pity that it did not work out, appearing that both Le Guen and Rangers never quite understood one another, and were never quite willing to change to do so.