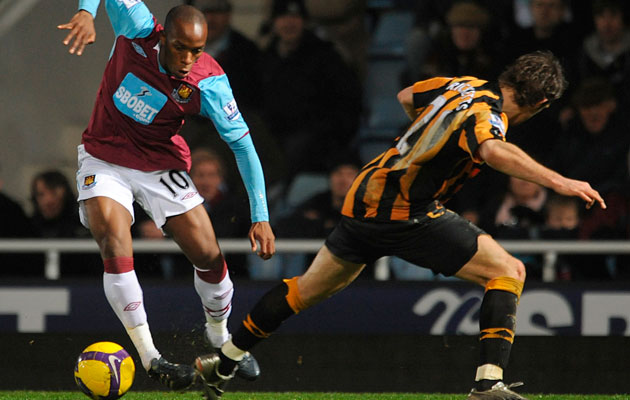 Throughout his tender, yet turbulent, career, the boy they simply call “Savio” has veered off-the-grid towards the lonely space of forgotten capability. But if you squint, you’ll notice that the former West Ham United teenager is still there, still cutting in from the left, looking for space to shoot.

Savio Nsereko was born in war-ridden Kampala, Uganda in 1989, before fleeing for Germany with his family when he was just a baby. His father died when he was only two years old, leaving his mother a single parent struggling to raise five kids. As with so many impoverished children throughout the world, Savio found relief on the football pitch. At 15 he entered 1860 Munich’s youth academy, from which he attracted the attention of Brescia’s sporting director, Gianluca Nani, who had famously been behind the developmental progress of Andrea Pirlo and Luca Toni. Savio signed with the Serie B club in 2005.

The next four years saw Savio’s football flourish. He swiftly gained a reputation as a lightning-quick winger who could cross with precision as well as score goals. In addition to making 23 appearances for Brescia, he would also begin an international youth career for his adopted country, Germany, in 2007. A high-point for Savio was taking Player of the Tournament honors for Die Mannschaft at the 2008 UEFA U-19 European Championships as part of the winning side that included future senior players Lars and Sven Bender, Stefan Reinartz and Ron-Robert Zieler. He would go on to represent Germany at the U-20 level too.

In January 2009 Savio drew interest from West Ham in the Premier League. At the time, the Hammers were undergoing a significant image rebranding after the fallout from the Carlos Tevez and Javier Mascherano transfer fiasco. By the time Nani stepped on-board at Upton Park as sporting director in March 2008 there was renewed optimism around the club that clearer, and cleaner, heads would prevail. Alongside chief executive Scott Duxbury and new boss Gianfranco Zola, Nani would attempt to revitalise the disgraced Hammers, starting with a talented winger he knew from Brescia.

West Ham signed Savio on January 26th 2009 for a club record £9 million. The signing was meant to ease supporters’ worries over the departure of Craig Bellamy to Manchester City but Nsereko would spend approximately seven months in England, making only ten appearances for West Ham, all as a substitute. The sanitation of the club proved hapless, and the dealings remained toxic.

The following January former Birmingham City owners David Sullivan and David Gold completed a joint takeover of the London club and immediately began cleaning house. Duxbury was the first to go, followed by Nani in February, and finally Zola in May. Not only was Savio a distant memory, but everyone who’d ever been associated with that 2008-2010 period of the club was given to the dust.

Everything surrounding Savio’s West Ham stint seemed rather vague. From the asinine transfer fee to the abysmal performances on the pitch, nothing added up to the hype the Upton Park faithful were fed by their leaders. By the time Sullivan and Gold gave Nsereko to Fiorentina in exchange for Portuguese centre-half Manuel Da Costa, the young German was well on his way to the land of erased footballers.

The debt of the Savio disaster did not stop there for West Ham. In November 2012, club managing director Karren Brady stated in her column for The Sun, “Just before this board took over, the club paid a huge amount to Brescia for the German U-21 who took part in a handful of matches and then departed for Fiorentina for a fraction of the price.”

“The deal is something that I’m investigating.”

Following the controversy surrounding West Ham’s sale of Alessandro Diamanti to Brescia in 2010, in which the Italian club allegedly failed to make sufficient payments to the Londoners, it’s justifiable that Brady would feel inclined to look deeper into the transfer. As of now, West Ham have not shared any info regarding that investigation.

Since 2010 Savio has journeyed throughout Europe and Asia looking for another place to call home. After a failed loan spell at Bologna, where he made only two appearances, Nsereko returned to the club of his youth, 1860 Munich. But even that loan term flopped. Additional missteps at Bulgaria’s Chernomorets Burgas, Italy’s Juve Stabia and Romania’s Vaslui ultimately led to Fiorentina selling Nsereko to a lower division side in his hometown of Munich, SpVgg Unterhaching. Savio was released after only three months with the Bavarian club, leading him to Viktoria Koln and Israeli side Hapoel Ironi Akko, making just a handful of appearances for each team.

Over these unstable years of Savio’s career, the most bizarre feature of his personality has been his elusive behaviour. During his second spell at 1860 the winger went missing from training without any word. Upon discovering him at his sister’s apartment a week later, 1860 terminated his contract with the club. Then, while at Juve Stabia, Savio went missing again during a vacation in Thailand. Upon receiving a ransom note from kidnappers demanding €3,000 for his safety, his mother issued a complaint with Interpol. Reportedly, he was later arrested and accused of faking his own abduction. Savio denies the whole incident was anything more than a misunderstanding.

In the past we’ve seen despairing cases like that of former Manchester City youth Michael Johnson, whose promising career was prematurely, and consciously, cut short due to years of battling mental illness. Nsereko’s psychological well-being has understandably been questioned in the past, but the refreshing news is that he is only 24 years old and intends to continue his footballing career with restored optimism.

In December of last year Savio signed for FC Atyrau of the Kazakhstan Premier League. He made his debut on March 15th, scoring the winning goal in a 1-0 victory against FC Kairat.

Speaking to Bild in 2013 about his ill-fated time with West Ham, Savio said, “I made a lot of mistakes. In fact, I did everything wrong that I could.”

Referring to the recklessness over his career, he disclosed that, “Twice I flew with my friends and girlfriends to Florida for my birthday. The private jet that took me there and back cost €160,000.”

“I lost grip with reality,” he admitted.

Thankfully for Savio, there’s still still time to reclaim the potential he once so plainly possessed. It’s unlikely that he’ll regain the spotlight of top-flight European football again, especially with the red flags decorating his resume, but when the regrets weigh as ponderously as they likely do with Savio, any small victory should be treated as a triumph.

Perhaps now is the time for him to enjoy the game as he once did when he was a child, when it served as a reprieve, and a saviour, rather than a millstone.