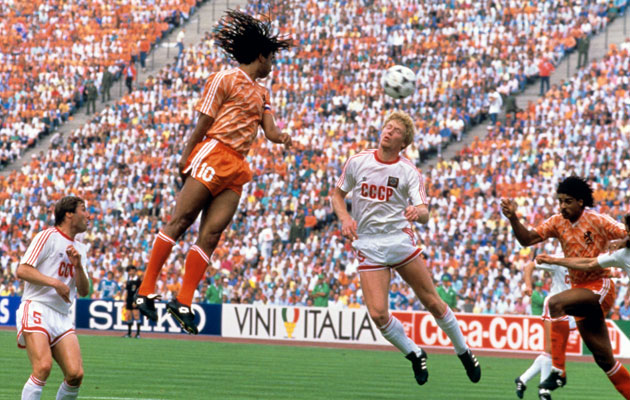 Just off the North Atlantic coast lies South America’s smallest nation, Suriname. The country, one of three on the continent, competes in the CONCACAF international tournaments and qualification groups. With a FIFA World Ranking currently standing at 136th and never qualified for a World Cup finals or Olympics, it is little wonder that the media limelight has never paid attention to the 500,000 strong state.

2014. The Suriname national football team is reliant on local players from the semi-professional divisions to make up the bulk of the squad. Only two players from abroad are regular features in the side with Tourano Pinas and Ray Frankel competing in Israel and Qatar respectively. The side failed to embark onto the final stages of Qualification for the Brazil World Cup highlighting the country’s struggle to compete with the dominant teams in the Americas.

But the majority of the football world failed to realise one of the games’ biggest secrets: This small sub-tropical state is home to some of Europe’s greatest footballing talents. The country, formerly a member of the Kingdom of Netherlands, was utilised to plant, grow and supply goods to be shipped back to the Dutch ports like Amsterdam. With local and African slaves forced to slog on the plantation fields in the sweltering heat, the colony’s populace were treated especially brutally by the European nobility. The abolition of slavery came in the 19th Century where slaves left the fields and left the Netherlands having to hire workers from other parts of the New World. The diverse community were granted independence in 1975 but many individuals still fled to the riches of the Netherlands. The Dutch didn’t realise that onto their shores were the children and ancestors of some Dutch greats.

So who are these thrilling players that have captivated Dutch fans? After the Total Football of the 1970’s, Netherlands went back into the faded corners of football as West Germany became an unrelenting force in European and World Football.

A revival came in the 1980’s as a new generation of professional footballers had changed the philosophy of football in the Netherlands. Either born in Suriname or with family members native to the former colony, players such as Ruud Gullit and Frank Rjikaard were signing off their international careers as the first of many to come from the South American land.

Both winning European Cup’s in their successful career, they inspired more Suriname players to migrate in the future and represent their country. Later in the decade came Edgar Davids, Clarence Seedorf, Patrick Kluivert and Jimmy-Floyd Hasselbaink.

The national team boasted an impressive side, in part thanks to the Surinamese players, with more success coming to those individuals across various leagues in Europe. The Netherlands would win the European Championship in 1988 and reached the semi-finals in two of the next three tournaments.

But it wasn’t just the national team that prospered, FIFA reported in 2009 that nearly 150 players from – or that could claim ancestry to Suriname – were playing in the Eredvise over the last ten years. 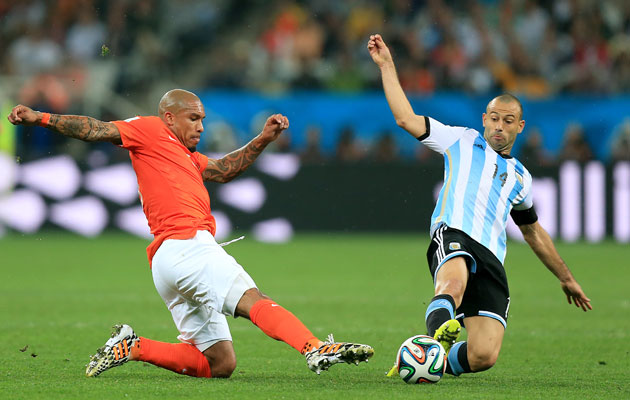 The Suriname legacy continues…Nigel De Jong in action during the 2014 World Cup semi final against Argentina.

Current players continue the Suriname legacy that has come from the independence. From midfielders like Nigel de Jong and Georginio Wijnaldum to shot-stoppers like Michael Vorm, Netherlands have remained one of the most influential sides on the international stage. In complete contrast, the South Americans are the third lowest ranked team on their continent.

Due to the Netherland’s expansive empire over the Renaissance, it has meant they became an influential colony through to the 20th Century. One of their groups of islands they had adopted was named the Dutch East Indies. Before being taken by the Japanese in 1942, the Islands in the Pacific Ocean were utilised for growing and supplying spices to Europe, causing a mass growth economically for the Dutch. After proclaiming independence after World War II and becoming Indonesia, much of the population returned to the Netherlands.

One of these to descend from the Indies was Giovanni Van Bronckhorst. The marauding left wing-back has been successfully throughout his career winning the Premiership with Arsenal and the La Liga and Champions League with Barcelona.

Unlucky for Gio, he ended his career at the 2010 World Cup where Spain stole the show. But from his parent’s background, their son became one of the most celebrated full-backs in the country’s history.

But it’s not just the Dutch colonies that has produced descendants or born superstars from their respected provinces. With Vurnon Anita born in the colony of Dutch Antilles, many current players have been born in other states across the globe.

Luuk and Siem de Jong were born in Switzerland, Bruno Martins Indi in Portugal and Jonathan De Guzman in Canada. Other destinations where internationals have been born include Belgium, Morocco, Turkey, Australia and Germany.

This talent aided by Dutch ancestry and the Dutch-born professionals has helped the Dutch become such a commanding side that has finished 2nd and 3rd in the last two World Cups.

Whether Les Oranjes would’ve been so successful without the influence of players from Suriname and the other colonies seems unlikely. But combining the players from the additional parts of the old empire makes for a impressive and difficult to beat combination XI.

The effects of colonialism on football have stopped Suriname from bolstering their chances of success. Now governed by a socialist dictatorship, legislation implemented by the regime means that a footballer that moves abroad to play in the Netherlands are ineligible to play for Suriname.

An opinion shared by the fan base of the nation is that those talented players who claim ancestry or were born in the country should be able to help their nation to succeed in future competitions.

The third-world country may have a chance of winning competitions if some of their associated Dutch players had picked to represent their South American counterparts. Especially if they could have a strike partnership like Kluivert and Hasselbaink punishing the inferior CONCACAF defences.

For the meantime any Suriname children hoping to play professional football when they’re older will have to leave their homeland which has oppressed any potential talents representing the undervalued land. The calls for the rule to be revoked keep on increasing as Suriname continues to fall behind the rest of the world; on and off the pitch.