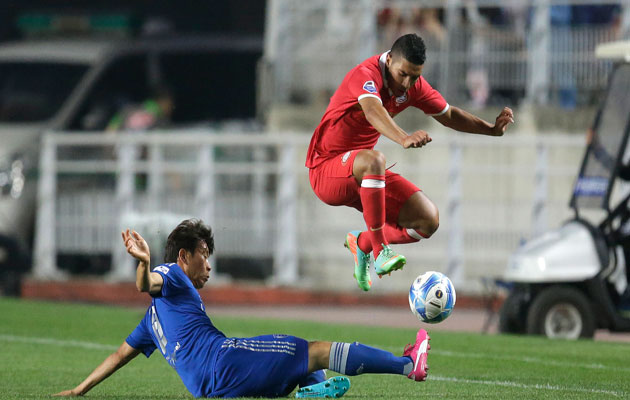 Brussels, 15 October 2013. Belgium is playing Wales in its final World Cup qualifier. Qualification for the World Cup has already been secured, so coach Marc Wilmots is trying out some things. With 12 minutes to go, he calls his last substitute to the bench and gives him a fatherly kiss on the forehead. A few moments later, Zakaria Bakkali makes his full international debut at the tender age of 17. Belgium has just secured one of the brightest prospects in world football.

Brussels, 2 October 2014. Marc Wilmots has just announced the squad for Belgium’s first EURO 2016 qualifiers against Andorra and Bosnia. One year since Bakkali’s debut, a few more youngsters have forced their way into Wilmots’ team. 19-year-olds Divock Origi and Adnan Januzaj were already called up for the World Cup, while Jason Denayer (also 19) has just been handed his first senior call up.

Meanwhile, Zakaria Bakkali was also called up… for the U19s. And a few hours later, he wasn’t anymore. Bakkali’s name had disappeared from the list. Nobody seemed to know exactly why, not even with the Belgian football association KBVB. The whole incident is symptomatic of the downward path Bakkali’s career has taken this year: ostracised at his club PSV Eindhoven and unwanted even by the national youth teams. The relationship between club and player has deteriorated to the point where PSV has even banned Bakkali from playing for the reserves. At 18, Bakkali’s blossoming career seems like it might already be over before it even started.

Zakaria Bakkali first rose to prominence as a key member of the Belgian U16, a team sometimes dubbed “the golden generation of ‘96” as it boasted a host of talent, also including Chelsea’s Charly Musonda, Man Utd’s Andreas Pereira, Man City’s Mathias Bossaerts and Everton’s David Henen. By then, PSV already knew they had an extraordinarily talented player on their hands, having lured Bakkali away from the Standard Liège youth academy in 2008 at the age of 12. The Dutch club managed to persuade the Belgian of Moroccan descent to stay in Eindhoven despite the interest of several Premier League teams, most notably Man City, by promising the starlet first team football.

So in the summer of 2012, Bakkali signed a three-year deal at PSV, training with the first team and playing for the reserves and U19s, despite being only 16. Despite intermittent rumours of an unhappy Bakkali considering a move away, he stayed and was promoted to the first team one year later.

On 30 July 2013, Zakaria Bakkali made his senior debut, playing 81 minutes in the first leg of the Champions League third qualifying round against Zulte Waregem. The young star immediately shone before the eyes of fans both Dutch and Belgian. As he continued to impress, scoring in the second leg one week later and netting a hattrick against NEC in the Eredivisie only three days after that, the hype surrounding Bakkali increased.

Of course, Marc Wilmots had also noticed. A mere nine days after his senior debut, Bakkali was included in the squad for Belgium’s friendly against France. He withdrew after sustaining an injury in training, but regained fitness just in time for the Red Devils’ September qualifier against Scotland. However, Bakkali, who still had the option to play for Morocco, again didn’t feature, this time because he wasn’t ready to commit himself to any side. In October, the youngster finally announced he would play for Belgium, and he was subsequently called up for the World Cup qualifying games against Croatia and Wales.

At that moment the first signs of trouble were already rising. Bakkali’s development was stalled by minor injuries and he was struggling to recapture his early season form. The winger’s involvement in PSV’s first team was gradually decreasing, with early substitutions at first but spending most of his time on the bench by December. In the second half of the season, he only made 3 cameo appearances, as the PSV staff grew more and more annoyed with his poor discipline both on and off the pitch.

Meanwhile, talks about a new deal were dragging on, much to the dismay of the club. PSV had first offered their prodigy a contract renewal back in August, but by the end of the season, he had yet to make a decision. Especially Bakkali’s constantly shifting attitude – one moment he wanted to renew his contract, the next he wanted to leave – and representatives were a source of annoyance for the PSV board. At the same time, Bakkali’s management blamed PSV for the impasse, accusing the club of not honouring its promises when the player signed his first deal.

The relationship between Bakkali and the PSV staff reached a new low in May when he was substituted after only 16 minutes during Ji-Sung Park’s testimonial because he didn’t adequately perform his defensive duties. As the youngster, whose contract expires in 2015, still hadn’t signed a new deal, he looked sure to leave the Dutch club in the summer. He was linked to several clubs, most notably Atletico Madrid, Frankfurt and Lille, but a move never materialised. And so,  Zakaria Bakkali started the season with Jong PSV, playing in the Dutch second division. Come September, after the transfer window had closed and Bakkali had failed to either leave or impress, PSV announced it withdrew its contract offer.

To add insult to injury, he was banned from playing games for Jong PSV, effectively sidelining the player until January. Even so, Bakkali still seems keen to play, declaring to Dutch media that he will play again for PSV after he has recovered from a groin injury, despite further assurances by the club that Bakkali would only play should Jong PSV suffer a massive injury crisis.

It seems that Zakaria Bakkali is at a point in his career where it’s make or break. At only 18, he still has plenty of time to turn things around and still forge the career many had envisioned for him.

With his deal up in the summer, he looks sure to leave PSV either in January or at the end of the season. But where will he go? Plenty of teams are still rumored to be interested, including the likes of Atletico Madrid, Napoli, Juventus, Chelsea and even Barcelona.

It seems crucial that Bakkali now chooses a club that will work closely with him, but most of all, if he wants to succeed at one of these teams and indeed be the next big thing, he himself will have some growing up to do. He will need to make some adjustments to his attitude both on and off the pitch, and most importantly he will need to get rid of the bad seeds in his entourage. Otherwise he might just become another hot prospect who didn’t make it.