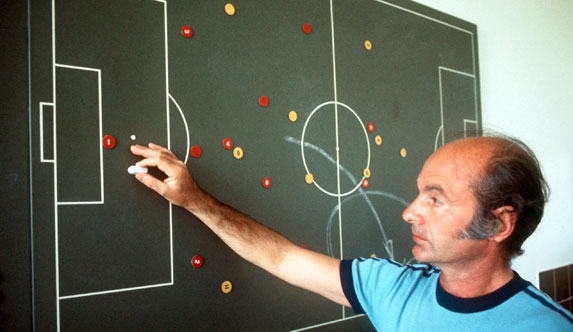 “I do not believe that there has been a single other person to have made as great an impact in the long history of Japanese soccer,” sports journalist and fellow Japanese Football Hall of Fame inductee Hiroshi Kagawa says of Dettmar Cramer, born in the German city of Dortmund in April 1925 but to this day renowned as the father of the modern game in Japan.

A seldom-heralded midfielder for Germania Wiesbaden and Viktoria Dortmund, Cramer served as an officer in a parachute division during World War Two and later coached several minor club sides in his native North Rhine-Westphalia region before his appointment as a talent scout and coach for the DFB in 1948, where he worked under the tutelage of Sepp Herberger, the future architect of ‘The Miracle of Bern’.

In the early 1960s, after a brief spell in journalism and with the floundering Japanese national side preparing for the showpiece Tokyo Summer Olympics, the man Franz Beckenbauer would later nickname ‘The Football Professor’ was invited to coach the squad as part of an agreement between the West German authorities and then JFA President Yuzuru Nozu.

Drawn in a group alongside Argentina, Ghana and Italy, who withdrew when FIFA questioned the amateur credentials of some of their squad, Japan recovered from a goal down with ten minutes to play to beat Argentina 3-2 in their opening game, future JFA president Saburo Kawabuchi and Aritatsu Ogi scoring twice in two minutes.

Leading twice against Ghana through Shigeo Yaehashi and Ryuichi Sugiyama’s second goal of the tournament, Japan eventually lost by the same scoreline but still made it through to the quarter finals – a notable achievement for a country that had never played in a World or Asian Cup and hadn’t even qualified for the previous games.

Once there, not even Cramer could counter a Czechoslovakia side who had already eliminated Brazil, a 4-0 defeat sending Japan into an unofficial play off for fifth place which they lost 6-1 to Yugoslavia, future Japan coach Ivan Osim scoring twice in Osaka.

“Football is a game of space and time,” Cramer once said. In Mexico City four years later – with the German now a technical adviser to the squad – Japan set about proving him right, picking up the bronze medal after wins over France, Nigeria and the host nation, draws with Spain and Brazil and a loss to eventual gold medallists Hungary in the semi-final.

Nobody doubted that the improvement was largely a result of their foreign coach. The national Japan Soccer League, precursor of today’s two-division professional J-League, had been set up at Cramer’s instigation in 1965 with an initial eight clubs.

One year after Mexico, and with Olympic medallist Shigeo Yaehashi among his assistants, Cramer started classes at the first FIFA coaching school in Chiba Prefecture,  the legacy of which can be seen in the number of Japanese players now turning out in major European leagues.

Japan taught Cramer, too. “After three months in Japan, I wrote articles about the country and its people. Two years later I threw them all away and corrected my mistakes, because Japan, its history and people knew better,” he told the Frankfurter Allgemeine. “I have a nasty character, an ugly temper and no patience,” he once admitted. “From the Japanese I learned to be patient.”

An assistant coach as West Germany reached the final of the 1966 World Cup, Cramer was centrally contracted by FIFA from 1967 to 1974,  a period in which he led Egypt to a bronze medal in the All Africa Games and assisted Helmut Schön as the Germans defeated the Netherlands to lift the World Cup on home soil.

Following a two-week spell in charge at Hertha Berlin, Cramer was given the job of coaching the US national team – though crucially not a contract – on a reputed $100,000 a year salary in July 1974, leaving after only two games to replace Udo Lattek as coach at European Cup holders Bayern Munich.

“I told the president ‘We need some changes,’” Lattek describes the moment he learnt of his dismissal. “’That’s right, you’re sacked’ he replied”.  Furious, the USSF threatened to sue for breach of contract, only to be forced into a humiliating climbdown when it was revealed they and Cramer had never formally signed an agreement.

Openly ridiculed by some of the Bayern squad and directors – club president Wilhelm Neudecker disparagingly referred to him as “the little fart” – Cramer crucially retained the backing of Franz Beckenbauer. In 1963, the 18-year-old Bayern player had not only got his girlfriend pregnant but, to the outrage of the DFB, also refused to marry her. Banned from his country’s youth side, Beckenbauer’s international career was salvaged when Cramer intervened on his behalf. The two men remained close.

“When Franz and I are together, we send and receive on the same wavelength,” Cramer told the official Bayern site in an interview to mark his 85th birthday.

The Professor led Bayern to back-to-back victories in the European Cup, including the still highly contentious 2-0 defeat of Leeds United in Paris which saw the Yorkshire club banned from European competition after pitched battles between their supporters and the French police.

“In the end we were the winners but we were very, very lucky,” Beckenbauer admitted, after referee Michel Kitabdjian waved away two clear penalties and disallowed a Peter Lorimer goal when Billy Bremner allegedly strayed offside.

An Intercontinental Cup followed in 1976, but despite guiding his team to one of the greatest comeback victories of all-time – overturning a 4-0 deficit at VFL Bochum to eventually win 6-5 – domestic success eluded Cramer, and when a run of five successive Bundesliga defeats left Bayern in the relegation places he was forced to trade jobs with Eintracht Frankfurt’s Hungarian coach Gyula Lóránt.

He would go on to manage Saudi club Al-Ittihad, the South Korean Under 23 squad, Aris Salonika, the national sides of Malaysia and Thailand and Bayer Leverkusen, who he took to their first ever top nine finish in the Bundesliga.

In 1997, after coaching in more than ninety countries in every corner of the globe, Cramer finally retired from management, remaining a FIFA inspector and technical adviser to both the Japanese and South Korean FA. “I am a multi-millionaire, but in air miles not euros,” he once joked.

Awarded the 3rd Class Order of the Sacred Treasure by a grateful Japan in 1971, Cramer was later among the first inductees into the Asian country’s Football Hall of Fame, then-prime minister Junichiro Koizumi naming the German among the ten reasons why he loved football ahead of the 2002 World Cup.

A recipient of the German Federal Order of Merit, two honorary professorships and, less predictably, a chief of the Mohawk and Sioux tribes, the German’s influence still endures.

As Hiroshi Kagawa puts it: “There is simply nobody else whose greatness…and unerring confidence in making strategic moves for the future fills me with such awe”.