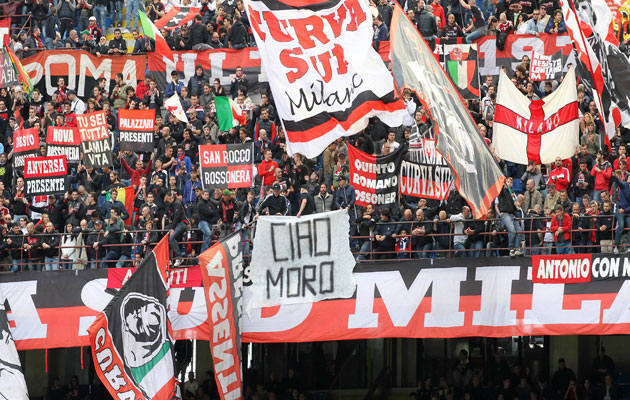 It is not much to look at. Faded, discoloured bricks are held together by unevenly applied concrete and smudged blue paint peels unpleasantly from the façade. The glass in the windows appears as if it may fall out with the gentlest of taps, yellowing net curtains denying onlookers any chance of a glimpse into the darkened interior.

Squeezed in between a convenience store and Thai restaurant, the derelict building does not look so much out of place as out of time – by a century at least. And yet when fans of Milan visited Nottingham earlier this year, they did not do so for Robin Hood, Wollaton Hall or Trent Bridge cricket ground. This is what they came to see.

Born in 1870 as the son of a butcher, Herbert Kilpin, the man responsible for the creation of the Italian giants, grew up in this house with both of his parents and nine older siblings. The building – currently 191 Mansfield Road but numbered 129 in Kilpin’s day – is about a mile’s walk from Nottingham’s historic Lace Market, where Kilpin earned a living as a warehouse assistant.

Today, the area hosts a myriad of trendy bars and eateries, yet many of the old buildings remain, hinting at its glorious past as the centre of the global lace industry. Kilpin would have worked long days in these narrow streets, storing and selling fabric and organising the warehouse for the next round of deliveries.

His boss, local businessman Thomas Adams, must have been impressed with Kilpin’s skill and industry: in 1891, the 21-year-old was sent to Turin to work for Adams’ friend and business acquaintance, Edoardo Bosio, a Swiss-Italian textiles merchant. This was a thrillingly rare opportunity, and Herbert Kilpin was not about to pass it up.

It was not just experience in the lace industry that Kilpin and Bosio had in common. As the two men grew closer, their shared love of football became apparent, hours of sleep sacrificed to talk about it.

Kilpin adored the game, previously playing for Notts Olympic in England’s nascent lower divisions and even setting up his own amateur club, Garibaldi Nottingham, at the tender age of thirteen.

Bosio, meanwhile, discovered football during some time spent working in London and, upon returning to Turin in 1886, attempted to teach the game to his compatriots. Armed with a leather ball obtained from his travels, Bosio formed Torino Football and Cricket Club just a few months later; although the side initially struggled to attract interest, they eventually secured enough players to become the peninsula’s first official team. When Kilpin arrived in 1891, the pair oversaw the merger between Bosio’s club and another local side, and the newly-formed Internazionale Torino went on to compete in the inaugural Italian Football Championship in 1899.

Somewhat surprisingly, Bosio and Kilpin’s footballing endeavours did not seem to get in the way of their day jobs, and the Englishman was sent by Adams to Milan in 1897. Although the city would go on to become one of the world’s most important fashion capitals, its textiles industry was still in its infancy in the nineteenth century, and Kilpin’s experience was highly valued by the Milanese businessmen.

It was in Italy’s second city where Kilpin met a group of five fellow English expatriates, including Alfred Edwards, an entrepreneur from Shropshire, and Samuel Davies, a worker from Manchester just three years his senior. The men would socialise together in the local taverns and restaurants, welcoming the opportunity to speak exclusively in English and reminisce about their former lives at home.

It was during one of these get-togethers – held in Milan’s Fiaschetteria Toscana bar in the harsh winter of 1899 – that the group came up with the idea of creating a football and cricket club, designed to ease homesickness and foster a sense of familiarity abroad. The regularity of the sextet’s gatherings combined with the quantity of alcohol routinely consumed mean that, even to this day, the exact date of AC Milan’s founding is unclear, but at some point in December 1899 a famous football club was born.

La Gazzetta Dello Sport, Italy’s iconic pink-paged daily newspaper, dedicated a solitary paragraph to the news. Unperturbed, the men pressed on. Edwards, it was decided, would become club president; at 49, he was the oldest member of the group, and his business nous was well-suited to the role. David Allison, born in France to English parents, became team captain, and Davies, Hoberlin Hoode and Kurt Lies all took to the field in Milan’s opening season.

Kilpin, though, was undoubtedly the star of the show: confident, smart, and a real football obsessive, the lace-maker would serve as the side’s player-manager. The first of Milan’s eighteen league titles was won under his guidance in 1901 after a 3-0 defeat of Genoa, and two more followed in 1906 and 1907. On the field, Kilpin was perfectly versatile and capable of playing in any position, a portly frame belying his stamina and athleticism.

By 1908, though, the Englishmen were gone. Kilpin was the last one standing and turned out for Milan in the previous year’s league triumph, but when the Italian Football Federation decided that foreign players had to be excluded to encourage greater local participation in the sport, Kilpin’s playing days were over.

Now married to Maria Capau, an Italian from the nearby city of Lodi, Kilpin remained in his adopted homeland until his death in 1916, brought about by liver cirrhosis after years of heavy drinking (Vittorio Pozzo, the manager famous for leading Italy to World Cup glory in 1934 and 1938, alleged that Kilpin would regularly take a flask of whisky onto the pitch to drink during breaks in play).

His body was declared lost until the 1990s, when local historian and Milanista Luigi La Rocca discovered it after years of searching. Now laid to rest in the city’s Cimitero Monumentale, Kilpin’s tomb commemorates his work as Milan’s principal forefather and expresses the gratitude of the club’s former and present-day fans.

One hundred and fifteen years later, the legacy of this butcher’s son from Nottingham lives on in one of the world’s biggest and most successful football teams: AC Milan take the Anglicised spelling of the city’s name rather than the Italian Milano, the club crest contains the flag of St George, and the side’s famous colours were chosen by Kilpin, who declared that ‘we are a team of devils so our colours will be red as fire and black to invoke fear in our opponents’.

In a huge banner displayed by Milan’s ultras before a Champions League clash with Barcelona last year, Kilpin was clad in that famous red and black striped shirt, accompanied by the words ‘we are the history’.

While supporters of the Rossoneri have clearly not forgotten their English founder, there is little information about him available in Nottingham, something of a surprise given its own rich footballing tradition.