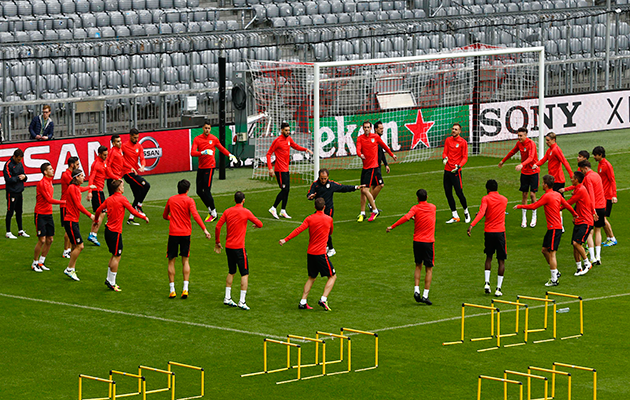 Video cameras in the tunnel at half time in Bayern’s majestic Allianz arena captured the Atlético Madrid players such as Fernando Torres, Koke and Gabi lingering in the tunnel before returning to the pitch for the second half of their Champions League semi-final tie, and beside them was Oscar ‘El Profe’ Ortega, Atletico’s coach and hidden weapon for the ‘Rojiblancos’.

His war cry of “With decision! We’ll equalize and then we’ll go through! Come on! Come on! Come on! Every 50/50 ball, let’s go in to win it,” provided the players with a rallying cry that served to spur them on to produce a second-half performance which ultimately served to see them through to the final in Milan.

The man famous for his punishing training regimes is, out-with the obvious role of manager Diego ‘El Cholo’ Simeone, key in facilitating Atlético’s incredible rise to the upper echelons of European football, the reason the team cover every blade of grass on the pitch and arrive ready for every battle in peak physical and mental condition, and this is especially significant given the fact that Simeone’s team doesn’t rotate often. His regimes leave football analysts in Spain scratching their heads, such is the intensity and curiousness of some of the work he puts the team through, and from the first minute he is in constant dialogue with the players; reminding them about their performance in their last game while playing the joker with them.

Surprisingly, 58 year old Óscar Ezequiel Ortega del Río, a native of Montevideo in Uruguay, places credit to his methodology with ideas taken not from the beautiful game, but that of rugby, such is his past experiences with the sport.

The real reason why Atlético fight tooth and nail for three points, playing with the competitive air of a mud-soaked small town rugby team, is because Ortega himself coached the game. Out with making money from making golf balls, as a youngster he married his football studies with teaching rugby at the British college in Montevideo. In an interview with Spanish daily newspaper El Pais in 2013, he spoke about the effect that rugby had on his methodology, citing the ability to pressure opponents and the need to turn a game into small, individual battlefields across the pitch.

“What do I extract from rugby? It’s not that I like it much or that I was well versed in the sport, but from rugby I learned about the system of quadrants, it’s a sport that divides the pitch into many different sectors to then create structures where you can create game-like situations with direct opponents,” he told the paper.

“There are things from rugby that are transferrable, like knowing in which area it is most important to exact pressure, the ‘tackle’ and also integrated team-work”. It’s a tough model,” he adds.

Tough, for a team that more obvious to the naked eye than many other teams that grace the European leagues, play like they train, with a brutal intensity and precision that harks back to the famous Catenaccio style made famous by Helenio Herrera’s Inter and Roma of the 1960s.

“We create the exercises, but the ball doesn’t come to you itself. You have to go and get it. And if it comes to you with an opponent, they don’t get by you. Always with elegance”, his words in describing his approach to coaching and the role played by the players.

His meticulous approach doesn’t stop with his training on the pitch; the pitch itself is one which he likes to analyse with a fine toothcomb, something which the Spanish TV cameras like themselves to pay close attention to pre-match. Just the other night he complained to the waiting media about the length of Bayern’s pitch, asking them “Do they forget to cut the grass? Or do they pay the groundsman to do nothing?,” a feat that recalled an earlier and much publicized grievance into the pitch at the Swedbank Stadion, home to Malmo. “This is the worst pitch I’ve ever seen. The worst.”

For some time, it was also rumoured in Spain that Ortega’s approach included daily weigh-ins by the players to ensure they remained as lean as possible and totally focused on their diet, a rumour that was confirmed by Koke and Griezmann on popular Spanish TV show ‘El Hormiguero’, much to the disbelief of the presenter. Indeed, for the players, to hear their names called out every morning at their training facility in Cerro del Espino is the norm for them, such is the focus placed on their physical state.

He’s also a stickler for tradition, ascribing to a pre-match ritual that sees him go for a run the morning before every game Atletico play, in whatever destination they may find themselves in. Come Munich, Madrid or Malmo, no matter what the occasion, Ortega is out before his team head to the stadium to burn off energy and keep himself in top condition.

A job that, from the since the age of twenty-one, has seen Ortega coach teams in Argentina, Japan, Colombia, Chile and Mexico, arriving in Spain in 2003 to take up a post with Sevilla, a team where Simeone himself was still a player. This before finally joining up with Simeone while the latter made his bow as a professional manager with Racing Club de Avellaneda in 2006 in a relationship that has seen the pair also work together at River Plate, San Lorenzo and Catania before they arrived in the Spanish capital.

Simeone has previously referred to their relationship as one of the best things that has happened to him as a manager, and you only need to look at his team’s physicality to appreciate why. With ‘Profe’ Ortega’s philosophy of ‘strength is non-negotiable’ at the heart of Simeone’s winning philosophy, its safe to say that if he represents the heart and soul of the current Atletico squad, then Ortega is the lungs and legs of it.

An interesting anecdote into the role Ortega’s sessions with the team, in preparation for a game or after, can be found with a look at the Copa Del Rey final of 2013 against Real Madrid, one which the colchoneros won by 2-1 in the backyard of their eternal rivals at the Bernabeu.

With Ortega on the pitch at half time warming up Ateltico’s substitutes, Madrid’s Alvaro Arbeloa, training alone, started imitating the warm-up techniques that Ortega was dictating to his players. Whether ultimately in jest or not, it showed that even those of the other Madrid team are aware of his methods.

Illustrative of the ‘Ortega’ effect lies with the fact that, while the likes of Real Madrid and Barcelona are busy raising their profile overseas with lengthy, lucrative pre-season tours, Ortega is at the helm putting the team through their paces, as custom dictates in the Simeone era, during triple training sessions on holes 5 and 7 of the golf course at Los Ángeles de San Rafael in Segovia, 80 kilometres from Madrid. “This is hell and he is the culprit”, exclaimed an exhausted Fernando Torres while pointing towards Ortega, as he spoke to Atlético’s TV station at the end of the first day of training at the start of the season.

Another sign of the importance Ortega’s disciplinarian approach to the team’s successes concerns the faith put in him by those in control of the purse-strings at the club. Economic ideas and money-spinning foreign tours take a backseat as in the first two weeks of pre-season, as the club prefer to lose money and focus on the preparation that allows to start the season in the best form possible, a season that this year, could see them walk away as champions of Europe come the end of May.

And this, in part, will be thanks to the rugby-minded Uruguayan they call ‘El Profe’.