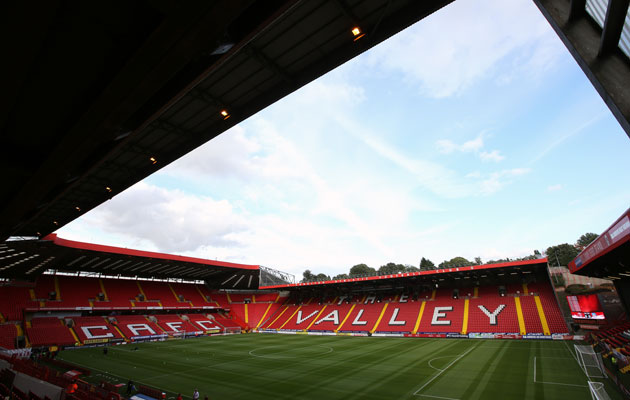 I’ve always liked seeing a football stadium on a day when no football is taking place. Like a medieval castle shut up with only a castellan and a few henchman to maintain it, they exist as a brooding presence, silently watching as the ordinary people below go about their day. And in a city as vast as London, containing 13 of the 92 teams in the top four English divisions, that’s a lot of brooding.

With only a few days to go before the 2014-15 season, a sunny day seemed like a good time to cycle round all of London’s football grounds in a single day and see if witnessing them would lead to some kind of mystical revelation. Well, nearly all of them, I ruled out Dagenham & Redbridge as it is so far north east it would have added an extra hour or two to an already fairly long schedule. Finally, like a Bolivian clock, this was an anticlockwise route, starting at Charlton and ending at Crystal Palace.

Descending from Blackheath down to Greenwich is one of London’s more scenic routes but then the A206 takes over and alternates between clumps of building supply outlets and roundabouts clogged with vehicles eager to disappear into the Blackwall tunnel. Charlton’s The Valley is always just a little bit further on than you remember, enough so that on a Monday lunchtime there is almost no-one around, anywhere. A school is closed, obviously, the ground is shut, the only discernable movement I see is the gates of the nearby level crossing rise and fall as empty trains saunter towards Kent. There’s a man in a suit on a mobile phone outside of The Valley. Perhaps he’s a soccer superagent nailing some monster deal. I don’t think so, though. The Den, home of Millwall FC is a hive of activity in contrast. Any approach to it is always enlivened by Lewisham’s recycling and refuse centre, just around the corner. It ensures that a high proportion of vehicles that I pass and am passed by are bin lorries, driven with the insouciance that comes of knowing your cargo is literally rubbish. Once they’re safely-ish negotiated I approach Millwall’s home to see that Zampa Road mainstay Chief Autos is busy and that the Millwall café is full, an entirely male clientele basking in the sun and eating omelettes. Life is good and the Dragon’s Lair gleams in the sunshine.

The second worst leg of the day awaits me as I head to West Ham. Crossing the river means a dreary trip through the Greenwich foot tunnel or doubling back and crossing Tower Bridge like a cut-scene from the Apprentice. I choose the latter, but it’s a long way north east from the Tower of London to the mock castles on the front of Upton Park. It’s hard to look at the stadium in the eye, knowing as we do that the Hammers are going to the Olympic Stadium in a couple of years. Like a faithful but fading dog, you can only rub its muzzle and move on as the vet pulls up in a Citroen.

Coming midway between West Ham and Leyton Orient, Westfield Stratford actually looks like a football ground. Crowded buses, hundreds of people coming and going and a faint air of excitement; is shopping the new football? No, it isn’t. Orient’s Matchroom Stadium is quieter but impressive since its rebuild. I stood on the old terrace here when Cyrille Regis scored in Martin O’Neill’s final match as Wycombe manager in 1995. Everything and everyone fades. ‘Welcome to East London’ reads a sign on the front of the stadium. I’ve been in it for hours mate.

The journey from Orient to White Hart Lane is one of the better legs of the day due to faster roads, especially as I cross the reservoirs, hideously bleak in winter but refreshingly breezy today. The Tottenham High Road, as usual, is longer than any human can imagine and when I finally reach Spurs’ home I discover a stadium bereft of people. I circle the entire ground looking for a decent angle but can’t really find one. One of the food vans outside is open for business although no-one’s using it. Of course  they aren’t. It’s 14.25 on a Monday. The Emirates is reached via the backstreets so I can have a look at the artist formerly known as Highbury. It still seems strange to see bookcases and plant pots and microplane graters through the windows at the foot of the old stands. Where once people cheered Jimmy Carter, they’re now pretending to read Angela Carter. Whatever you think about modern stadia, the Emirates is a shining spaceship of a ground and for the first time in my trip I see actual tourists, taking photos, climbing statues and looking at the back of Steve Bould’s 26 foot high head. For a brief second or two I get that matchday feeling, although it passes as a small cleaning truck glances a bollard and everyone jumps.

Arsenal to QPR sounds hefty but familiar roads make it seem less so and it’s distracting to see the tribes change as you head through the centre of town. From the unleaded rush of the Euston Road down through Baker Street and then the descent through Notting Hill and Holland Park where Americans in three-quarter length trousers and au pairs with three-quarter length attention spans fight for the same pavement space. Shepherd’s Bush is as wondrous as ever and I pass my second Westfield of the day on the way to Loftus Road. After the disappointment of not seeing someone make a live gif of Harry Redknapp leaning out of a car window I’m mollified by the shouts of an argument opposite the stadium. No hot afternoon in London is complete without one and this gets bonus points as someone throws a book off a balcony. It was only a paperback.

Like at Arsenal, there are tourists at Chelsea, though they seem chastened that Super Frank has pitched up at Manchester City. I used to stand on the Shed occasionally with my dad in the early 1990s. The John Spencer years. The Anthony Barness years. Now I’m taking photos of the back of a hotel with an iPhone. Blair’s Britain.

Craven Cottage twinkles in the sunlight as joggers, children, mums and ice cream men dance their centuries old dance in Bishops Park. It’s the only ground of the day to show any signs of life as I can hear music on the tannoy, interrupted by a man saying “testing, testing, testing, testing”. If you were worried about Fulham’s matchday sound system ahead of the new campaign, let me reassure you. The backstreet pubs look enticing, largely because they’re empty, but instead it’s a bit of Thames towpath before the moment everyone dreams of, the A315 to Brentford.

Nine stadiums (and 88km) down, the final three are London clubs, but they’re far out, man.  Brentford’s Griffin Park first and it’s now almost five o’clock. Just up from the stadium some boys and girls of summer are drinking fruity alcopops outside an off-license and watching their mate do wheelies on a moped. His sidekick is doing the same on the mountain bike but it’s not really the same and no-one is paying him any attention. I say from my glass house. Griffin Park is nice and neat and seems shut up for the day. Everyone likes Brentford. Unless they have to turn around and ride to Kingston.

Back over the river for the first time since Tower Bridge five hours ago and up through Richmond Park where there are people just cycling for the sake of it, idiots who haven’t seen the homes of 10 professional football clubs today. Out of the park and down through Kingston where a woman who looks like Vic Mackey’s wife smiles from a pub garden as I wait at some traffic lights. My destination is the current base of AFC Wimbledon, and their brave tenants Kingstonian. It’s now about 17:30 and there is no-one about. The smallest stadium of the day and up there with Tottenham for the least lively. To emphasise the suburban depths we are in, I see a goth at a bus stop as I head back towards Richmond Park. Like Kevin Muscat, I leave the nastiest leg till last. Kingston to Thornton Heath is a mission and it’s now rush hour and my legs are tiring. Overtaking bike commuters simply by habit now, the A23 from Streatham down towards Palace is like the dullest version of Chase HQ ever made. In and out of buses I swear and this road will never end. Half expecting to see the English channel looming over the horizon, I eventually turn left and glide towards the 12th and final stadium of the day. Not wanting to plunge into Sainsbury’s car park, I loop towards the back of Selhurst Park and congregate on the corner of Holmesdale road. Behind the ground the sun is setting as fast as Liverpool’s title dreams did here three months ago. Like Luis Suarez I pull my jersey over my eyes and dream of cycling in the Catalonian hills.

It’s 20 minutes or so from Palace back to my home and I use this time to reflect on what I have seen and heard on this sunny day in August. To come across a single football ground in an everyday moment remains exciting, to see 12 in a single day while cycling 90 miles is almost too much. At Charlton it felt thrilling to see a giant structure built and maintained simply for use 20-odd times a season. By Stamford Bridge it felt almost as ubiquitous as a Tesco Metro. By Selhurst Park I just wanted to go home and eat some dinner.  I love football, I love football stadiums but consume them in moderation, please.