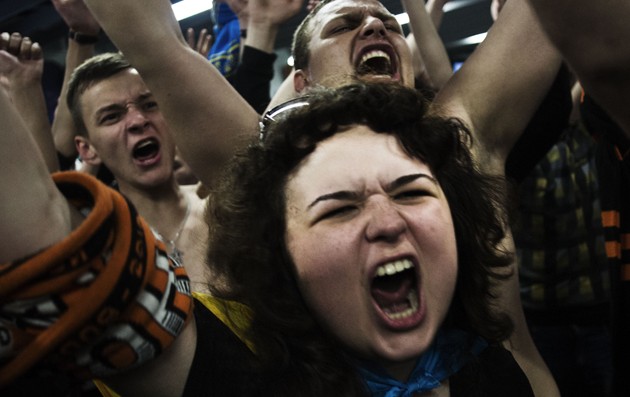 Ukraine is a country on the brink of collapse. Crimea, the disputed peninsula south of the Ukrainian mainland, is currently under the control of the Russian Federation after its annexation by Russian forces in the wake of last year’s Euromaidan protests, whilst much of the east of the country continues to be ravaged by violence, with many in the primarily Russian-speaking areas calling to follow Crimea in becoming part of the Russian Federation.

Whilst, of course, sports are the last thing on anybody’s mind in times of terrible violence like these, the situation surrounding the future of Ukrainian football and what it might look like both after and during the ongoing conflict with Russia is a fascinating one, and one that could have a deep impact not only on the sport but also on the political makeup of a country that is struggling to retain its independence.

Immediately in the aftermath of the annexation of Crimea, the status of the peninsula’s two top-tier clubs, FC Sevastopol and SC Tavriya Simferopol, was brought under intense scrutiny.

With the peninsula under Russian control – despite the fact that all but eleven members of the United Nations refuse to acknowledge its status as a federal subject of the Russian Federation – and a large Russian-speaking population dominating the area, both clubs signaled their intentions to transfer to the Russian football league system in time for the 2014-15 season.

In an attempt to smooth their passage into Russia, both FC Sevastopol and SC Tavriya Simferopol were liquidated and replaced with FC SKChF Sevastopol and FC TSK Simferopol, which were both registered according to the laws of Russia, and, ignoring the cries of protest from both inside and outside Ukraine, Russia decided to grant the wishes of both newly formed sides by incorporating them into their league structure alongside FC Zhemchuzhyna Yalta, a club from the southern coast of Crimea that were expelled from the Ukrainian Second League at the end of the 2012-13 season after struggling with debt-related issues for several years.

In a statement released in July, the Russian Football Union announced that all three clubs had officially left the Ukrainian football structure and would participate in the Russian Second Division South, one of five groups in the system’s third tier.

Whilst Crimea remained relatively peaceful through its annexation, violence and confusion still rages across the eastern parts of Ukraine, leaving the possibility of a unified country up in the air.

With many parts of the Russian-speaking eastern population still calling for a union with Russia, the successful transfer of the three Crimean football clubs could prove to be a catalyst for huge change in the Ukrainian league as a whole.

Fourteen teams from the top two tiers are based east of the Dnieper River, with nine of those sitting in the eastern oblasts of Kharkiv, Donetsk and Luhansk, the regions that have been the epicentre of violence and pro-Russian demonstrations – both Donetsk and Luhansk have created their own respective People’s Republics after receiving overwhelming support from local citizens in recent referendums, whilst pro-Russian groups continue to battle for control of regional state administration buildings across Kharkiv.

As the battle for control of Eastern Ukraine rages on, anti-Kyiv feeling is growing amongst its inhabitants, and many argue that this ill-feeling towards the west of the country, coupled with the admittance of the Russian successors to the top-tier clubs FC Sevastopol and SC Tavriya Simferopol to the Russian league system, could give license to large clubs like Shakhtar Donetsk to engineer moves over the border themselves, which, in the eyes of those pulling the strings at the top of the club, would be heavily beneficial financially.

Further to this, the two main teams from the Russian-speaking cities of Odessa and Mykolaiv – Chernomorets Odessa and MFK Mykolaiv, respectively – could also be added to the list of clubs that could threaten to depart from the Ukrainian league system, leaving just half of the top two leagues’ current sides “safely” in the hands of the Football Federation of Ukraine.

No Ukrainian clubs have yet joined FC Sevastopol, SC Tavriya Simferopol and FC Zhemchuzhyna Yalta in defecting to Russia, but the start of the new Ukrainian football season has been marred with problems, with the continuing fighting forcing several of the sides to play their home games in stadiums as far as 1,000 kilometres away.

Both Shakhtar Donetsk and Metalurh Donetsk were required to kick off the new campaign in the western city of L’viv, whilst Dnipro Dnipropetrovsk had their Champions League 3rd Qualifying Round tie against København moved to the Olympic Stadium in Kyiv after complaints from both the Danish club and the Danish Football Association over safety fears.

In addition, top-tier club Zorya Luhansk have had to relocate from their home in war-torn Luhansk to a combination of Slavutych Arena in Zaporizhia in the southeast of the country and Valeriy Labanovskyi Dynamo Stadium in Kyiv after the city became overrun by pro-Russian groups, resulting in their home ground, Avanhard Stadium, being damaged in a mortar attack.

As a result of the uncertainty surrounding the future of Ukraine, the large-scale unrest also had a negative affect on players at clubs that have found themselves at the centre of the violence, with many foreign footballers fearing for their safety.

It started at Chernomorets Odessa, with Markus Berger, Anderson Santana, Franck Dja Djédjé, Sito Riera, Pablo Fontanello and Elis Bakaj all having their contracts terminated as a result of the current crises, and shortly before the start of the season six South American Shakhtar Donetsk players – Douglas Costa, Fred, Dentinho, Alex Teixiera, Ismaily and Facundo Ferreyra – refused to return to Ukraine after playing a pre-season friendly against Lyon in France.

Five of the six finally returned almost a week after refusing to travel in the wake of the Malaysian Airlines MH17 disaster, but Argentine striker Ferreyra orchestrated a move away to Newcastle United on loan after making it clear that he would not set foot in Ukraine whilst the situation was so unstable.

The future also looks unpredictable for Russia, whose decision to integrate the three Crimean clubs into their football league system has left them in danger of being hit by further sanctions that could prove extremely costly.

The move has led to the Ukrainian football authorities lodging a complaint with both FIFA and UEFA, and many in the international community have called for Russia to be stripped of the 2018 World Cup as punishment.

Whilst UEFA have so far only released a short statement that condemns the integration of the three clubs, claiming that “any football matches played by Crimean clubs organised under the auspices of the Russian Football Union will not be recognised by UEFA until further notice”, the Russian Football Union’s decision to go ahead with its plans to incorporate teams from the newly annexed territory certainly is a bold move that has the potential to backfire spectacularly.

The decisions that UEFA do – and, equally, do not – decide to make in the coming weeks and months will be incredibly interesting, and could pave the way for further development in this tale of uncertainty that continues to tighten its grip on Ukrainian football.

For now, all that fans can do is wait and see what happens, praying that the fighting stops and life finally returns to normal. The question is, will it ever be achieved?