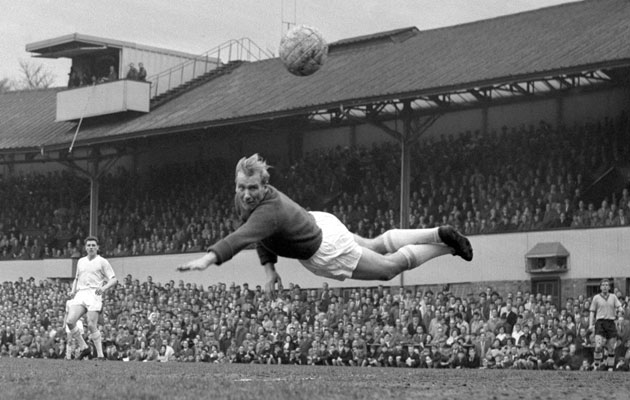 The war to end all wars, had itself finally ended in 1945; most of the World was in tatters either literally or monetarily, and in many places both. Football had of course been put on hiatus, or at least the professional kind, but no sooner had peace been declared it was back on the agenda, and there were some who saw an opportunity to make it great once more. Leagues were reformed, Internationals were back on the schedule, and bans on travel abroad for clubs were lifted. Yay!

It is here where we find ourselves in Deutschland 1954; or at least the Western bit. Manchester City had been invited over by the newly reformed German FA to build up excitement for the World Cup with a series of kick-abouts with a number of German clubs.

There was also the case of Bernhard Trautmann that swayed the deal.

Trautmann had, as most know, been a Paratrooper in the war and had been eventually captured, ending up in England as a POW. The British Government had given him some sort of freedom, which eventually saw him ending up at St. Helens FC; as an outfield player.

This is not how we (or Lev Yashin) remember the mighty Trautmann, but it is how he began. An injury saw him go in between the sticks and from that point on there he remained. As much as he had been surprised by the UK with its row-upon-row of terrace housing (previously believing that the country was far more advanced than this), he fell in love with the place, and stayed.

He was a proud and passionate man particularly when it came to football, and whilst the many Nazi/Kraut comments he received on matchdays, from supporters and the opposition players alike (and occasionally from his own team-mates), would have seen a lesser man quit, it seemed to only intensify his on-field actions, often resulting in him beating ten tons of shit out of an opposing member. But this was the 50s, and as such he’d often get away with it, save for when his wrath was targeted towards the referee, which unfortunately happened several times.

With the way football was ran at the time, he was never deemed suitable for inclusion in his National side, something which preyed heavily upon his mind. This affected him to such an extent that he once attempted to instigate his own transfer away from Manchester City and back to Germany. The Blues, however, replied to this by slapping an unheard of £20,000 price tag on his head ending his dreams for good; the Germans were used to a more simpler way of conducting business, merely multiplying a players weekly wage by fifty-two, and that would be his cost to another club.

Now even though Bert would never be picked for his National side, he had made a name for himself in his homeland, and the German FA knew it. They also realised the importance of getting themselves prepared for the upcoming World Cup in Switzerland, so a deal was struck with Manchester City whereby they would play a series of friendlies with German teams and every time Trautmann featured in goal, the club would be given £500. As it turned out, City would sign up to play five matches in all, and as this was at a time before the wage ceiling had been removed (meaning players were on a mere pittance), the club were looking at a very tidy profit.

As expected, the players treated this trip to Western Germany as a free holiday and essentially spent all their time in bars drinking the much-loved (and cheap) German beer. All, that is, except Trautmann himself who was relishing the thought of being able, at last, to play in front of his countrymen; he was going to take on the task of these five matches very seriously indeed, the exact opposite of his team-mates – he was far from impressed by their lackadaisical approach.

In fact when it came to the actual matches the City players treated them as a general kick-a-bout; win, lose, draw, it mattered not to them. After all, this was a holiday, and the players weren’t ever going to see any of this money, so why bother? The first match against Bayern München ended unpredictably in a rather entertaining 3-3 draw before moving onto Fürth SV and beating them 2-0. The third match was against Stuttgart Kickers, which ended as a 2-2 draw – this Oberliga side did their utmost to live up to their name by dishing out as many kicks to their City opposition as possible, whether they had the ball or not. Ironically this was essentially what happened to the Manchester City players in 1938 after they had been invited to play at the Berlin stadium by that all-round jolly nice person Adolf Hitler, when they faced a Nazi XI. Some things never change, I suppose.

Match number four proved to be a little easier and City ran out winners, 1-0, versus FSV Frankfurt before heading off to face a Wuppertal Combined XI. The Blues had, as said, not taken these matches at all seriously and had barely put in any effort, so being undefeated was annoying the German FA somewhat. However, the hosts did their best to be most accommodating and invited the players on several all paid for excursions, but the Blues turned every single one of them down and simply hopped back into a bar as soon as their football boots were off. The Directors on the other hand accepted them whilst being joined by Trautmann himself who was feeling proud to be able to show off his Vaterland, not that any of them were giving their goalkeeper any credit at all.

There was, however, a small problem with Trautmann’s right leg. He had sustained an injury during a previous match and because it had not been attended to properly or he had been allowed to give it some rest, this injury had resulted in blood poisoning. He simply could not play. The Directors faced with the prospect of not receiving an additional £500 refused to accept this and forced Bert to have an injection from a local German Doctor, don his kit, and get onto the pitch.

The pre-match promotion for the Wuppertal Combined XI had gone into overdrive and had attracted a massive crowd, including none other than a large number of British Forces who happened to be stationed in the area, and took the opportunity to see a team from good ol’ Blighty.

But just like the match against Stuttgart Kicker, the Wuppertal team took it upon themselves to be a most unsavoury bunch, leading to the dismissal of Manchester City’s Bill McAdams. The match eventually finished with both sets of players and the capacity crowd in a very ugly mood, and at the final whistle it further escalated with several clashes between both sets of players. City’s manager, Les McDowell rushed to the player’s tunnel to attempt to calm things down but was immediately confronted by one of the local Polizei, who evidently thought he was about to join in and attack a West German player. In the ensuing mêlée the Officer was shoved down the stairway in front of all to see (much to the amusement of Roy Paul and Ken Barnes).

From the terraces the British troops looked on. There had been peace in this country for nine years, but here were British men being violently attacked by West German Nationals and the local constabulary. Should they intervene, and come to the rescue of their own people? And what if they did? The sight of so many British soldiers storming onto the pitch from the stands to protect their own – would that constitute as an act of war? Was World War Three about to commence?

Thankfully before they did, it calmed down, and after several apologies of “you misunderstood those punches to the face” both sides left the field of play and went to their respective hotels/homes. However, the bad feelings continued at a post-tournament banquet where a German official took it upon himself to bring it all up again describing Manchester City’s bad behaviour. The club still got their £2,500 so they probably didn’t care too much, save, of course, for Trautmann who felt offended and stormed out. The tour did, however, finally end on a positive note after yet more apologies from both sides and City left West Germany the following day with a very healthy bank account. But without Bert Trautmann.

It was his leg, you see. Les McDowall had told him to stay behind and seek treatment for his injury and blood poisoning, and then to return once he was fit and well, bringing with him the medical bill whereby the club would fully reimburse him. Over the course of 10 days at a cost of 200DM, Trautmann was treated and given the all clear. He actually stayed until the end of July before returning to his new homeland and presented City with his bill.

No, he didn’t get a penny. Did you really think he would?

But why should Manchester City have been crowned 1954 World Champions? West Germany went on to win that World Cup in Switzerland, yet their National players had been unable to beat City in those five games. No other club in the World can lay claim to something like this – it was most Untypical City.