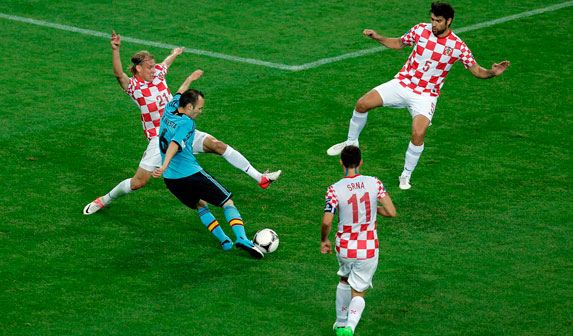 Lionel Messi, upon receiving his unprecedented fourth consecutive Ballon d’Or, admitted that the award should have gone to Barcelona team mate Andres Iniesta.

The Spaniard came in third place, behind Messi and his Real Madrid rival Cristiano Ronaldo. Much has been made of the competition between the two, but Iniesta’s season has gone comparatively under the radar.

Undoubtedly the greatest player of his generation, Messi humbly accepted the award, which saw him break Michel Platini’s long-standing record.

The Ballon d’Or is the preserve of the year’s best performer, and with it comes worldwide recognition and the opportunity for a player to etch their place in footballing record books alongside the true greats of European football.

To hand Messi his fourth award at the tender age of 25 seemed all but a formality given the media hysteria that constantly shadows the diminutive Argentinian.

With plenty more seasons ahead of him to add to his already bursting personal trophy cabinet, a year in which he won no truly major trophies seems perhaps the logical time to overlook him.

Barcelona, for all their flair and creativity, failed to defend either the Champions League or La Liga crowns they won so charismatically a season earlier.

Yes, they won the Club World Cup and the Copa Del Rey, but were Pep Guardiola’s side happy with their haul come May?

Results show Cristiano Ronaldo was Messi’s closest rival – both talismen for club and country, and leading the lines for teams built around them.

Ronaldo was also a record-breaker, but in his case with his team. Real Madrid broke La Liga’s overall points record and topped the table with the most goals ever scored and the most games ever won in a single season, and after all – and Barca fans must agree – football is a team game.

Ronaldo has also had his time, winning the award in 2008. It would have been farcical if the Portuguese never got his hands on the Ballon d’Or, as his name deserves to be remembered as the challenger that helped push Messi to his current dazzling heights.

Even with a talent like Messi, other players’ contributions should not be overlooked. Cruyff shared the spoils over the years with the likes of Gerd Muller, Franz Beckenbauer and Oleg Blokhin, while all three of Manchester United’s ‘Holy Trinity’ compirsing Denis Law, George Best and Bobby Charlton, held the award at one time.

Even the great Alfredo Di Stefano took a back seat in 1958 when Real Madrid team mate Raymond Kopa received the prestigious golden ball. Without the award, perhaps few would recall the Frenchman’s vital contribution to the iconic Real team that dominated the early years of the European Cup.

Devoted followers may argue that Messi made history this year in breaking Muller’s European goalscoring record, and thus deserves the recognition, but did the German win the Ballon d’Or for his then unprecedented achievements? No.

Muller was a solitary winner of the accolade, but not the season he netted his 40 year standing goalscoring landmark, despite also winning the Bundesliga with Bayern and the European Championships with West Germany in 1972.

He won it two years earlier, but in ’72 was overlooked in favour of Franz Beckenbauer, captan and leader of the European Championship-winning side.

The World Cup is Messi’s Holy Grail, and many argue he will never be placed on the same pedestal as Pele or Maradona unless he wins it.

Still considered the pinnacle of world football, winners have historically made their way into the individual history books. Before Messi’s triumph in 2010, World Cup winners have collected the Ballon d’Or every coinciding four years since when eligible (we must remember that before George Weah’s 1995 win, the Ballon d’Or was only open to players of European heritage).

Glittering names such as Fabio Cannavaro, Ronaldo, Zinedine Zidane, Lothar Matthaus, Paulo Rossi, Beckenbauer and Charlton were all profiteers as the dominant player for their respective nations.

Spain’s current golden generation are the only team in history to boast three consecutive major international trophies, yet none of their squad has ever lifted the prestigious individual award that Barca ace Messi has received for the past four years.

Messi is clearly the spark that makes the Barcelona team tick, but the clock doesn’t work without the cogs that supply his goals. For Messi’s second hand, think Iniesta’s minute counter and Xavi’s relaxed yet assertive hour mark.

Argentina have long been a team of gifted individuals that don’t produce consistently in the major tournaments. Their last international trophy came in the form of a 1993 Copa America win, and they haven’t had their hands on the World Cup since Maradona’s heyday.

The true deserving winner of the 2012 Ballon d’Or lies in the Spanish side in the form of creative genius Andres Iniesta. ‘El Cerebro’ was voted player of the tournament at this year’s European Championships, landing three man-of-the-match votes, including the final. He also beat Messi to the UEFA Best Player in Europe Award.

Iniesta’s consistent greatness warrants a noteworthy place in the history books. Many great players never won the Ballon d’Or, but the pint-sized playmaker is an integral component in the Barcelona machine that has drawn comparisons with the great Milan and Madrid teams of the past, not to mention the record-breaking Spanish outfit that has changed the perceptions of international football.

He deserves his reward.