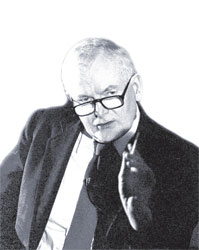 I am, quite definitely, a signed-up member of the WWW club, the Wenger Well Wishers. I’m with him all the way on his crusade to have Arsenal play a skilful game, and I admire the way that he sticks to his guns when the critics gather to howl their contempt for his “pretty football”.

It’s just that I’ve always found it odd that Wenger should pay so little attention to Brazil – the country of the “beautiful game” – and its players. That is, I used to find it odd. Right now, surveying the wreckage of a truly disastrous season, it seems like a major blunder to me.

How can it be that, during Wenger’s 15 years at Arsenal – a time during which he has been the leader in fielding teams comprised largely, even totally, of foreign players – he has signed only a mere handful of Brazilian players?

And a closer look at those Brazilians tells a story: Sylvinho, who is a defender, and Gilberto Silva and Edu, who are muscular defensive midfielders. There have been a couple of forwards – the huge Julio Baptista, and Eduardo, who came disguised as a Croatian, and currently there’s another midfielder, Denilson, who at 23, is still not considered good enough for a regular starting spot and has let it be known he wants out.

But, apart from the ill-fated Eduardo, is there a player with the creative skill and artistry that has always been the signature of Brazil’s style?

Not that I can see. The baffling truth is that Wenger has always shunned Brazilians. Perhaps he believes that Brazilian players – who flourish in Russia, Germany, Japan and just about anywhere else – can’t adapt to the English game. Instead, he favours a French approach.

Whatever the reasons for that – whether it’s because he has great contacts in France and doesn’t feel the need to look much wider, or whether it’s simply an ethnic bias – it is a policy that worked brilliantly for a while, but that has now come off the rails.

A six-year trophy drought cannot be explained away. It represents massive failure and the picture is even more desolate when one looks at the current squad. There is only one truly outstanding player, Spain’s Cesc Fabregas, who may not be around next season. The squad contains a host of French, or French-speaking, players – Abou Diaby, Bacary Sagna, Laurent Koscielny, Samir Nasri, Sebastien Squillaci, Gael Clichy, Marouane Chamakh, Emmanuel Eboue, Alexandre Song, Johan Djourou – good players all, no doubt… good, but many of them simply not good enough.

Then there is the failure of Arsenal’s academy to produce a supply of young players. In the 15 years of Wenger’s Arsenal reign, Jack Wilshere is the only potential star to appear – Theo Walcott and Aaron Ramsey were already first-team players, for Southampton and Cardiff City respectively, before joining Arsenal.

The situation is dire enough for Wenger to announce that he does now intend to spend money, declaring that “the basic improvements that have to be made are defensive”.  Well, yes, the defence is not good enough. But the creative part of the team is not good enough either – and should Fabregas leave, it will be goodbye to the beautiful game.

Arsenal’s problems will not be solved by a half-hearted plunge into the transfer market, which would likely be a replay of the ineffective purchases – Koscielny, Squillaci, Chamakh – that Wenger made in 2010. Nor will a solution come while he persists with the heavily French beau jeu that spluttered so badly this past season.

Above all, Wenger needs to call a halt to the greatest anomaly in the Premier League: his lack of interest in the subtleties and the artistry of the Brazilian – indeed, the Latin American – game.