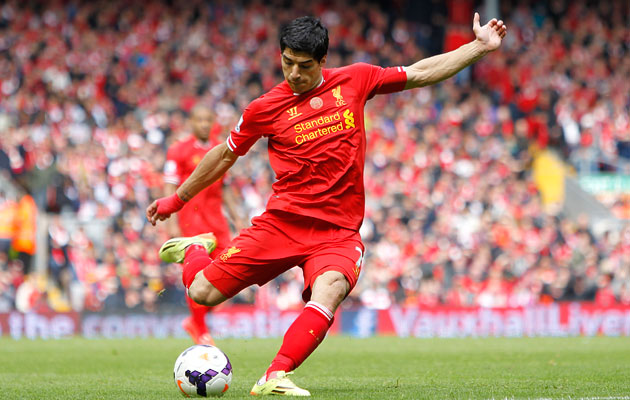 “How will Liverpool cope without Luis Suarez?” was the perfectly legitimate question posed by a journalist to the manager Brendan Rogers with the team on tour in New York.

Rogers is reported to have “fixed an icy glare” on his interlocutor, replying, “When we didn’t have Luis we scored goals. That won’t be an issue.”

Oh yes it will; how can it not be? Without Suarez’s cornucopia of goals some of them masterpieces of technique and flair, Liverpool would not have been remotely qualified at last for the European Champions Cup.

All very well to cite the electric pace of the expensive new acquisition, Lazar Markovic, the undoubted abilities of Raheem Sterling and Daniel Sturridge. Without Suarez and it is no fault of the unlucky Rodgers that he and in every sense his bite has been lost, it simply cannot be the same.

But you can hardly blame Rodgers for putting the best face possible on so calamitous a loss.

Now that the smoke has cleared, how finally should we see Germany’s sensational 7-1 crushing of Brazil in Belo Horizonte?

As wise a judge as Arsene Wenger has called it the end for Brazilian football, and there has certainly been a temptation to see Germany as a super team, dynamic and invincible. But surely things should be taken in context.

Germany that day in Belo Horizonte the city where, remember, in 1950 England suffered a traumatising shock of their own when losing 1-0 to a team of USA part timers, were irresistible.

Without Neymar in attack, victim of a brutal Colombian challenge unpunished by an inept Spanish referee, whose permissiveness had paved the way for such a foul, without Thiago Silva in defence, Brazil were a team in chaos.

And they were little better when in the traditionally meaningless third place match they were beaten 3-0 by a Dutch team which lost its key midfielder Sneijder before the kick off. Silva did play on this occasion. But so, beside him, did the self indulgently erratic David Luiz who would give away one of those three goals with an inept header back.

One never takes too seriously a manager’s claim that it was all his fault, but there was good reason to believe that when Big Phil Scolari made such a confession there was substance to it. Luiz is beyond doubt a highly talented player, capable inter alia of the kind of devastating free kick which brought a goal in the victory against Colombia (a game remember in which the Brazilians queued up to maltreat the splendid Jamez Rodrigues who was one of the first to comfort Neymar.

Brazil on that occasion in Belo Horizonte simply fell apart. Other teams, not least Argentina who, despite the decline of the crucial Messi, took the Germans to extra time and very nearly to penalties) gave the Germans a far harder run for their money.

Remember they could only draw in the qualifiers with a Ghana team beaten by the USA, could win only 1-0 against the USA themselves, and 1-0 against a French team which though largely outplayed were robbed of a 1-1 draw so close to the end only by a supreme one handed save by Neuer.

All credit to the Germans who, after a couple of poor international tournament showings, got the Deutsche Fussball Bund and the Bundesliga together to work out a dynamic new coaching system which has brought such sustained success, with over half a European winning Under-21 team which beat England 4-0 in a Final staying so productively together.

Could such a plan work in England? I deeply doubt it. The trouble with FA coaching, with or without the problematical assistance of the Greed Is Good League, is that it tends to ossify.

Long ago, its great preceptor, Walter Winterbottom, who always rated his job as coaching chief above that of England team manager, coaching was simply as he once told me a means of showing how to practice.

But in time it degenerated into a jargon filled orthodoxy and would reach its absolute nadir under Long Ball Charlie Hughes and his hopelessly outdated methods, the brainchild far back in the 1950s of Wing Commander Charles Reep. Whose dubious cut out the midfield policies were espoused with such transient success by Graham Taylor, at Watford.

This was however a fine German team without a major star, a Neymar, a Messi, a Rodriguez or a Ronaldo, who was destined to sink with his inadequate Portuguese team.

That 7-1 victory over a Brazilian team where Scolari diced with death, keeping Luiz at centre back, will always be enshrined in football history.

But Brazil, back to Dunga, never known managerially for his addiction to adventurous football, must now lick their wounds, and try to find a centre forward. Poor Fred. He never really stood a chance and Jo was no better. Leonidas, Vava, Ademir, Ronaldo, Romario. No more alas than glittering memories.