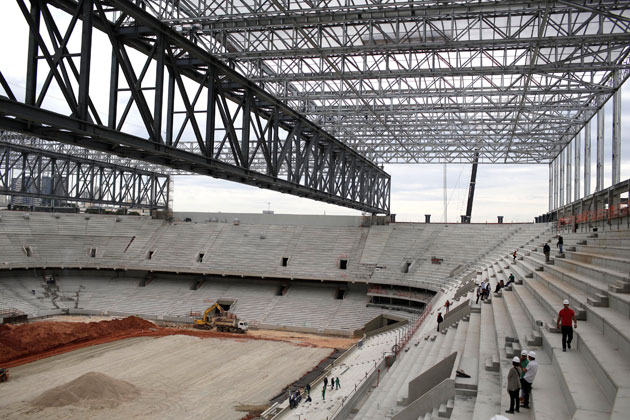 Despite all sorts of dire warnings that it might be dropped after a string of finance-linked delays, FIFA had no option.

To axe Curitiba at this stage would have opened FIFA and organisers up to a string of legal actions as well as round-the-world fury from fans as far afield as Australia and Spain and who are already committed financially to tickets, travel and accommodation.

Brazil is struggling to hit minimum hosting conditions with five stadia still not formally ‘delivered.’ The country and the organisers would find it impossible to cope with any exacerbation. To that extent FIFA was a prisoner of the Brazilians.

President Sepp Blatter and secretary-general Jerome Valcke may reflect further on the mistake of acquiescing to the hosts’ demand to use a politically-driven and over-optimistic 12 venues when eight or 10 is perfectly adequate.

Valcke, at the start of a two-day finalists’ workship in Florianopolis, said via Twitter: “Curitiba confirmed as World Cup venue, based on the financial guarantees, the commitment by all stakeholders and progress made.

“It’s a race against a very tight timeline. [A] collective effort by all the stakeholders involved in Curitiba must continue at highest pace.”

FIFA said, in a statement, that a special committee set up by the Sports Ministry and involving Atletico Paranaense, the state of Parana and the city of Curitiba, had come up with “a comprehensive recovery plan which includes the solving of the financial challenges involved.”

It added: “Through this collective approach, the committee achieved the implementation of immediate action for propelling the progress necessary in the works at the Arena da Baixada.

“Based on the financial guarantees now provided by the local authorities and Atletico Paranaense for the stadium works including the complementary structures, as well as the latest assessment from the technical experts of the Local Organising Committee, FIFA and the federal government, Curitiba was reconfirmed as a venue of the 2014 FIFA World Cup.”

In effect, once the ticketing programme began a year ago all the Brazilian federal and regional authorities relaxed, confident that any threats or deadlines from FIFA meant little.

Hence the farce last week in Manaus when the stadium opening, which President Dilma Rousseff was supposed not to attend, was postponed but she duly turned up on the set date to launch a housing project. This was the fourth time Manaus – by Governor Omar Aziz’s own admission – had missed a scheduled delivery date.

Valcke has said he remains confident that all the staging organisations were “working extremely hard, determined to make Brazil 2014 the ‘Copa das Copas, or simply translated: ‘the World Cup of World Cups.’”

But Curitiba is far from the only problem. Uncertainty looms over Cuiaba after reports – denied by local city officials – that they kept secret the full extent of damage incurred by a fire in two of the grandstands last October.

Also significant problems remain in Porto Alegre over how and where the essential temporary ‘support’ village will be constructed.

Initially FIFA had set a “last possible deadline” of December 31 last year to allow six months for the essential support service structures to be put in place at each venue.