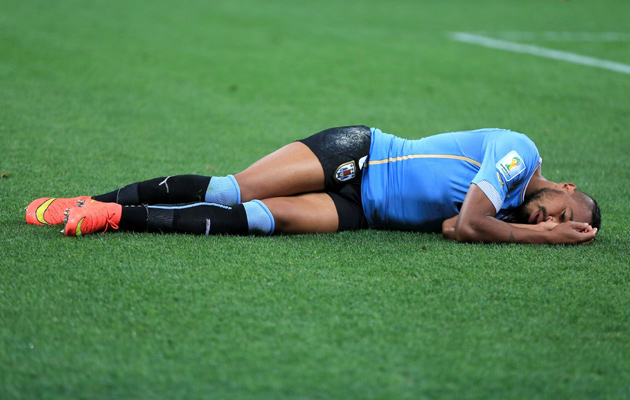 What they are not prepared to do, however, is to claim the power to overrule the team doctor who is the ultimate medically responsible official for a player.

Jiri Dvorak, the world federation’s chief medical officer, spelled out the chain of medical command and liability lines in the wake of the Alvaro Pereira incident.

Uruguay’s leftback was knocked unconscious briefly during the second half of the 2-1 Group D win over England. Team doctor Alfredo Pan signalled for a substitution but Pereira insisted in playing on after an apparently cursory exchange with medical staff.

This prompted concern from players’ union FIFPro which proposed a temporary substitution while a player was assessed.

Defending FIFA’s – and, by inference, his own – work in this field, he said: “FIFA leads this issue in terms of prevention. In 2006 the International Board introduced a mandatory red card for an elbow to the head.

“Then, at a consensus meeting with experts from all around the world in December 2012 – in collaboration with the International Olympic Committee and international sports federations – we concluded how we should manage this issue further.

“FIFA can regulate many things but when it comes to health we cannot make strict regulations we can only make recommendations . . . we can manage and educate but we cannot overrule the team physician.”

Illustrating the point, Dvorak went through the steps of the Pereira incident.

He said: “I have spoken with Dr Pan and the responsible FIFA medical officer who was at that stadium. With this player a diagnosis of concussion was not established.

“He was examined at the time and after the match – he was also called for the doping control – he was re-examined by several doctors. Later he was sent to hospital for an MRI scan which proved absolutely normal.

“He is training and, according to the report from the team doctor, he has never had symptoms or signs which would allow a diagnosis of concussion.

“As I said, we can only recommend, we cannot overrrule the decision of the team physician. He is the doctor so I have to trust his assessment.”

Dvorak considered difficulties of legal liability might arise from a FIFPro suggestion that a FIFA medical team should have power to overrule a team doctor.

In the first instance the referee should make a first assessment and then summon the team doctor. In the World Cup the team doctor can then call on the ‘sideline medical team’ for further assistance.

However, in the case of a player collapsing with no-one near him – raising fears of a cardiac arrest – the medical team has the right “to run on the pitch to attend to the player even before the referee says something.”