For those now suffering from post-tournament depression, help is at hand; the Copa Libertadores is coming to a conclusion which, if not always strong on quality, is beyond doubt dramatic.

The places in the final are up for grabs this week, with the possibility of a fairy tale every bit as remarkable as Leicester City’s Premier League title.

In May Pelileo beat Indi Native 44-1 in what is effectively Ecuador’s third division, but the Guinness Book of Records declined to include this as the biggest winning margin. That honour remains with Arbroath, who beat Bon Accord 36-0 in an 1885 Scottish Cup tie. The justification is that the level of play in the Ecuadorian game is not considered sufficiently high. There is an easy counter argument. Nine years ago this league included a club who now stand just 90 minutes away from the final of South America’s Champions League equivalent.

The rise of little Independiente del Valle, from the outskirts of Quito, the capital, began in 2007 when they won promotion to the second division. Two years later they were in the top flight and they have kept progressing. The club’s model is based on excellent youth development work – Swansea’s Jefferson Montero is their most illustrious graduate, left winger Bryan Cabezas the most promising of the current crop.

Without the pressures of a mass club, with continuity on the touchlines (Uruguayan coach Pablo Repetto has been in charge for nearly four years), the club have been in contention for the Ecuadorian title, and are now in the Libertadores for the third consecutive year. They have produced some heroic back to the wall defensive performances to get through to the last four – a 0-0 draw away to Colo Colo in a packed Santiago stadium got them out of the group phase, a 1-0 defeat in Buenos Aires was enough to eliminate reigning champions River Plate 2-1 on aggregate, they were 2-0 down and reduced to 10 men away to Pumas of Mexico and still managed to find a goal to force a penalty shoot out, which they won. And now they lead Boca Juniors 2-1 after the first leg, and prepare for an intense 90 minutes in the Bonbonera for the return game.

Thursday’s semi final second leg, then, is bound to be dramatic. Brazil’s Sao Paulo hope that Wednesday’s will be, too. If so, it means they are in with a chance of overturning a 2-0 deficit against Atletico Nacional of Colombia. 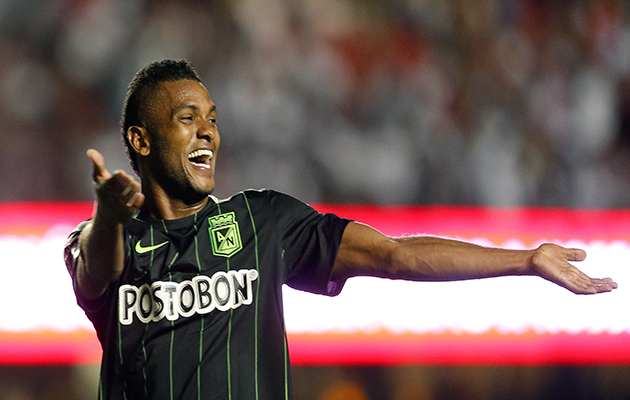 The first leg was a lowpoint even in the recent history of Brazilian football.

Everything seemed to be tipped in Sao Paulo’s favour. The six week break between quarter and semi finals, for example, gave them an absurd advantage. The Brazilian Championship kept on playing, while there was a pause in the Colombian league. Sao Paulo, then, should have been much more match fit than their opponents. Moreover Nacional, with no competitive games behind them, also had to adjust their team. Two key players had moved on, a new centre forward had been incorporated. Sao Paulo had lost no one – and had made centre back Maicon one of the ten most expensive signings by a Brazilian club when they made his loan from Porto permanent.

But after the initial five minute flurry there was not the slightest sign of Sao Paulo’s financial or competitive advantage. Nacional eased themselves into the match with their passing patterns while Sao Paulo could only charge forward without science or guile.

And when Maicon was sent off – perhaps a little harshly – the Colombians stepped up a gear, passed holes in the Sao Paulo defence and scored two late goals, confirming a superiority they had already established.

Sao Paulo can surely not play as badly a second time. But, against a side now brimming with confidence, can they do enough to overturn that first leg lead?

Arsene Wenger for England? You cannot be serious

Nick Bidwell’s Notes from Germany: toothless Germany wonder where the predators have gone