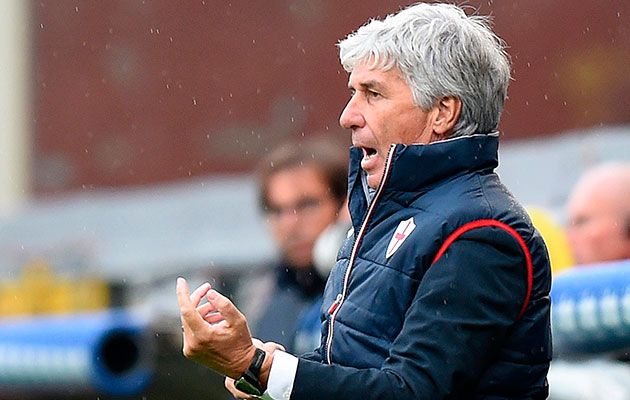 Usually, a coach who has just won 4-0 is pretty pleased with things. Not so, 57-year-old Gian Piero Gasperini, the Genoa coach, who after his side had beaten Palermo 4-0 on Sunday, turned his angry attention on that section of the club’s diehard “ultra” fans who have been making life difficult for him. Naming those who had contested his handling of the team, he said:

“My idea of Genoa fans is something superior to that of people like Leopizzi, Cobra or Traverso (three well known Genoa fans), guys with whom I have had problems…When I come across guys like them, I think of (incidents involving) Criscito, Sculli and the team shirts…When Genoa lose, I feel terrible unlike others who become protagonists, feel just fine and get themselves a lot of radio and TV coverage”.

In case you have forgotten, “Sculli and the team shirts” refers to an ugly incident at the Marassi stadium in April 2012 when, with Genoa losing 0-4 at home to relegation battlers, Siena, the Genoa fans brought the game to a halt by throwing smoke bombs onto the pitch. At that point, some of the fans called on the players to take off their team shirts and hand them over to them. If you cannot do better than that, then you are not worthy of wearing this shirt, was the basic “reasoning” behind the request.

The fan request seemed like a piece of over-the-top street theatre. What was amazing, however, was that the players obeyed, with team captain Marco Rossi doing the rounds of the team and very quickly collecting an armful of team shirts. Just as Rossi was about to hand them over, Genoa player Giuseppe Sculli, the only one who had not taken off his shirt, intervened with the “ultra” on the side of the pitch, reassuring the fans, telling his team mates to put their team jersies back on and enabling the game to restart.

Giuseppe Sculli, of course, is no ordinary journey-man footballer. A nephew of the imprisoned “Ndrangheta” (Calabrian mafia) boss, Giuseppe Morabito, 34-year-old Sculli was a more than useful, attacking midfielder for Lazio, Pescara, Messina and Chievo as well as Genoa during a 20 year long career which also saw him win a bronze medal with Italy’s Olympic team at Athens 2004. Currently, Sculli is out of contract.

In March 2013, Sculli’s father Francesco was arrested and held for a week, accused of mafia membership and money laundering. Sculli himself has been investigated in relation to mafia membership, drug trafficking and match-fixing but never charged. He has often claimed that he has been victimised because of his all too infamous family pedigree. What is certain is that Giuseppe Sculli on that April day at the Marassi was the one Genoa player able to stand up to the “ultra”.

The other incident mentioned by coach Gasperini concerns Genoa and Zenit St. Petersburg left back, Domenico Criscito, sensationally dropped from Cesare Prandelli’s Italy squad right on the eve of the Euro 2012 championships in Poland and Ukraine. Criscito had been named by investigators in relation to the Cremona based “Last Bet” match-fixing scandal making it seem opportune that Prandelli drop him from the squad.

Like Sculli, a team mate at Genoa, Criscito had had irregular and informal contact with various Genoa “ultra” fans prompting magistrates to suspect that he might have been involved in a May 2011, Lazio-Genoa (4-2), suspected match fix. However, in February of last year, the charges against Criscito were dropped. In the meantime, he had lost out on Euro 2012 whilst he has played only four times for Italy in the last three seasons.

All of those dark memories may have been going through Gian Piero Gasperini’s mind as he spoke out against his critics, those ultra fans who did not much appreciate Genoa’s 3-2 derby loss to Sampdoria on January 6th. During Sunday’s game, fans unveiled a banner which invited both Gasperini and club owner Enrico Preziosi to leave the club.

Will the 4-0 victory take the pressure off Genoa, currently 5th from bottom, five points clear of the relegation zone? Will Gasperini’s protest against the ultra achieve anything? Perhaps yes and perhaps no but the Genoa coach surely has to be commended for speaking his mind.