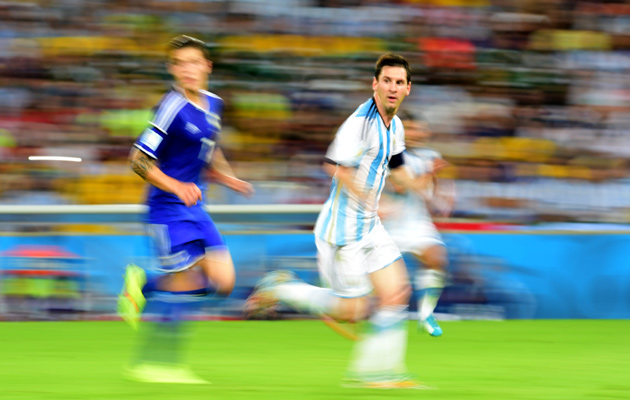 One of the disadvantages of holding the World Cup in a such a vast country as Brazil is that it’s impossible to travel to a different game every day. Even poor old Sepp Blatter only managed two games in the first four days. (Although that may have had something to do with the less-than-favourable reception he gets whenever he encounters the Brazilian public.)

But one upside of the tournament’s travel constraints is that there has been time to get to pre-match press conferences. Here in Rio de Janeiro, it meant a larger-than-expected attendance at the briefing held by Argentina coach Alejandro Sabella on Saturday, the day before his team’s opening match against Bosnia-Herzegovina.

Sabella was interesting – not for what he said, but rather for what he did not say. He rarely spoke with much conviction and seemed uncomfortable facing the international media. He was questioned about a possible change to a 5-3-2 formation, but seemed reluctant to expand on his reasons for a switch away from the 4-3-3 used in qualifying.

Sabella is something of a reluctant leader. A long-time number two to Daniel Passarella, he was appointed Argentina coach on the back of a two-year spell with Estudiantes. Not necessarily the ideal qualifications for handling such stellar names as Lionel Messi, Sergio Aguero and Angel Di Maria.

There have been suggestions by some, including our own Jonathan Wilson, that Messi played a role in switching to the 5-3-2 and away from the more attack-minded 4-3-3. But it seems more likely that Sabella simply lacked the confidence to go with an attacking formation.

With injury ruling out Rodrigo Palacio, Argentina’s fourth striker, Sabella was reluctant to start with all his forwards and leave no striking option on the bench. So he went, instead, for the safety-first approach against Bosnia.

The 5-3-2 formation was used in qualifying for the away games played at altitude. It shored up the defence but inevitably limited the attacking options. And so it proved last night against Bosnia.

Argentina struggled to find their shape and rhythm in the first half. Although half-time substitute Gonzalo Higuain provided the assist for Messi’s wonderful winning goal, it was Fernando Gago, also introduced at the interval, who made the real difference for Argentina following the switch to a three-man attack.

Messi seemed far more comfortable playing alongside Aguero and Higuain. Their presence enabled him to drop deep and collect the ball for the start of the run which ended in his opening goal of the tournament.

Ironically, Bosnia’s late goal was precisely the sort of event that Sabella had hoped a 5-3-2 formation would prevent. But the 4-3-3 gives Argentina – and crucially, Messi – a greater platform for success.

Whether Sabella has the confidence to pursue such a strategy as the tournament progresses remains to be seen.