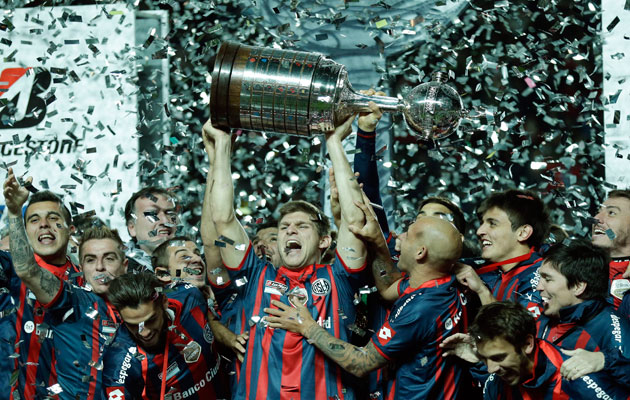 A year ago San Lorenzo of Argentina brought an uneven group phase in the Copa Libertadores to a close with a resounding 3-0 victory – which was good enough to ensure qualification to the knock out stages only because the other game in the group went their way, with the side they needed to win coming through 5-4.

River Plate will be hoping this in an omen. San Lorenzo, of course, went on to win the trophy. River went into this year’s competition as one of the favourites, but had been unable to win any of their first five games. Last week they beat San Jose of Bolivia 3-0 – which was good enough because Juan Aurich of Peru lost at home to Tigres of Mexico.

Everything seemed stacked in favour of Aurich. Tigres, already qualified, took only 16 players, most of them reserves. The game took place on an awful synthetic pitch in Chiclayo, bad for the quality of the game but good for Aurich, who are thoroughly used to the conditions. And Aurich won a disputable penalty to go 3-2 up early in the second half. Tigres hit back, and to River’s delight won 5-4.

The three Argentine heavyweights, River, Boca (who will meet in the next round) and Racing have all now made it through to the last 16. Over the next few days, Huracan, San Lorenzo and Estudiantes will seek to join them.

But if Argentina have a chance of getting all their teams through, so too do Brazil. Only Corinthians have guaranteed their slot – but Atletico Mineiro, Sao Paulo, Cruzeiro and Internacional all have their fate in their own hands.

It is not possible, though, for both Argentina and Brazil to end the group stage with a 100% success rate. In Group 2 Corinthians will be joined either by San Lorenzo, or by their neighbours and rivals Sao Paulo., who go into the final round with a two point advantage.

On Wednesday San Lorenzo are at home to Danubio of Uruguay, who have lost all their matches in the competition. A four goal victory obliges Sao Paulo to beat a Corinthians side who have not lost a game so far this year. They were, though, beaten on penalties by Palmeiras on Sunday in the semi finals of the local State Championship – while Sao Paulo went down 2-1 to Santos.

Indeed, this is a time of year when the calendar is especially unkind to Brazil’s representatives in the Libertadores. Decisive matches in the continental competition are squeezed in between big derbies as, after months of low key action, the state championships suddenly come to a climax.

This may well have been a factor in last week’s defeats suffered by the Belo Horizonte pair. On Sunday 12th, Historic rivals. Cruzeiro and Atletico Mineiro drew 1-1 in the first leg of their local semi final. Just 49 hours after that game had ended, Cruzeiro were back in action in the Libertadores – and in this short space of time they had to travel to Argentina, where they went down 3-1 to Huracan. Atletico had an extra day’s rest, but a much longer journey – up to Guadalajara in Mexico, where they lost 1-0 to Atlas.

This Sunday, the Belo Horizonte rivals squared up once more in the second leg, Atletico coming from behind to win 2-1. Once more Cruzeiro play in the Libertadores on Tuesday and Atletico on Wednesday – with the strain eased slightly by the fact that this time they are at home. Cruzeiro will consider themselves strong favourites to overcome Bolivia’s Universitario de Sucre and claim their spot, while Atletico need a two goal victory against Colo Colo of Chile.

The Brazilian club with the most straightforward task are Internacional. A draw at home to The Strongest of Bolivia will be good enough for the Porto Alegre club to book their place in the last 16. They were also in domestic action on Sunday, qualifying for their local final with a 3-1 win over little Brasil of Pelotas. But now the bar is raised. Over the next two Sundays they will take on their big rivals Gremio in the final – huge local derbies, perhaps the fiercest in the country. And in between these matches, Inter, barring disaster against The Strongest on Wednesday, will also be fighting for a place in the quarter finals of the Libertadores.

All of this is just a slice of evidence – and there is plenty more – that Brazilian football draws up its domestic calendar as if the rest of the world did not exist. In this case the combination of decisive games and long journeys surely makes unacceptable demands on the players.