Luis Suarez: Face to Face with the Barcelona forward

You also won the Golden Shoe in 2014, before your move to Barcelona from Liverpool. How have you changed, as a player and a person, since then?
Well, actually, I don’t think I have changed. I continue with the same ambition of achieving important things in the world of football. I think that the titles you can get as a team really help you to achieve other personal titles, like this one.

Ten years ago, you arrived in Holland from Uruguay. When you look back, what was the most important thing you learned there and is that the reason you have said that you want to return some day to Ajax?
I have always said the Netherlands is where I learned the most. It is like a football school. It made me improve financially, technically and gave me more ambition. Of course, I would like to come back as a way to thank them, especially to Ajax, for making me a better and a well-known player around Europe.

Have you been surprised by how your career has progressed since leaving South America, or did you always know you had it in you to become Europe’s top goalscorer?
I’m not surprised myself, it’s just that I feel proud and satisfied with every stage I have had in my career – starting at Nacional in Uruguay, then going to a small team in Holland [Groningen], spending one year there, doing well and moving on to Ajax, then going to Liverpool, and now here in Barcelona, a club where every player would like to be. I feel proud of every step I have taken. I have fulfilled all the objectives I set myself and I don’t regret any of the decisions I made.

This is the second time that you have been Europe’s top scorer. What was the hardest: to win the Golden Shoe when at Liverpool or with Barcelona?
At the time, Liverpool weren’t a team fighting to win the Premier League, and English football is very hard and competitive, so maybe then that has more merit. Here, it’s also difficult, but the other players in the team really make it easier.

What is your next challenge? Another Golden Shoe? A World Player title? The World Cup?
A World Player title, that is more a question of marketing and media than personal achievements. With the Golden Shoe, there is no doubt that I have received it for my personal performance. Apart from that, it would be really nice to win another Champions League with Barcelona.

Do Messi and Cristiano Ronaldo provide an incentive for you to play better and score more goals?
Not at all. I never compare myself to anyone. I have my personality, my own style to help the team. Awards like this are welcome because I play number nine. My team-mates help me a lot and I appreciate that. 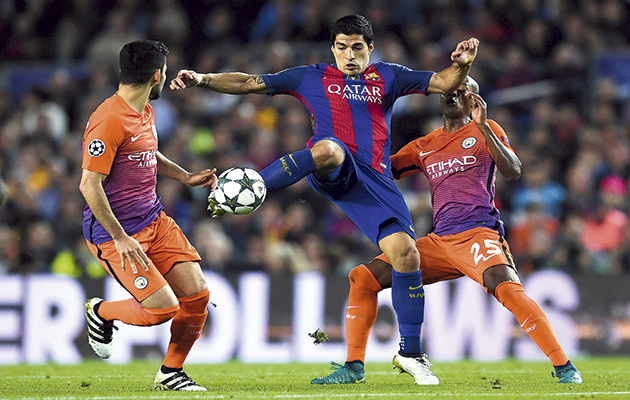 Luis Suarez in action for Barcelona against Manchester City earlier this season.

Last season, Messi and Ronaldo were not your biggest threat to winning the Golden Shoe. Instead, that came from Jonas of Benfica and Napoli’s Gonzalo Higuain. Were you surprised by their performances?
Not with Higuain, because everybody knows he is a great player and the figures confirmed his quality. With Jonas, yes, it was a bit surprising but he also is very talented and being in a competition like the Portuguese league helped him.

And how do you assess the qualities of Bundesliga strikers Robert Lewandowski and Pierre-Emerick Aubameyang?
I think they are two different players. Lewandowski is a more physical player, with great technique and has proved it over the last five or six years by playing at a very high level. Aubameyang is very good technically, he is still growing and I am sure he will be among the greatest players of Europe in a few years.

You grew up on the streets and played football on the streets. Has that given you different values to players who grew up in academies, away from the difficulties of life?
I think that the values I bring from the streets are to fight and never complain about the pain.

I mean, I never ask to be subbed during a game unless I feel really bad or I actually cannot continue playing. People that know me know that. The sacrifices I have made since I was a child, not having money to buy football shoes, and making huge efforts to go training, have helped me to appreciate everything I have today.

What would be your advice for kids who want to reach your level?
Never lose the ambition and never change. Always be yourself and trust yourself even if you don’t have that much quality. I haven’t changed since I played in small teams and I still play with the same passion. When I arrived here, many people doubted whether I could adapt to this level and this way of playing, but I always trusted myself.

Will the World Cup in Russia in 2018 be the most important tournament in your career?
Yes, I hope so. First of all, we hope to qualify with Uruguay and I am very excited about playing with my national team. You always hope that Uruguay performs well, although we know it will be difficult to improve on what we did in South Africa.

Turning to your club side, Barcelona, what do you think about Arda Turan? He didn’t play for six months after signing but is now playing very well…
Yes, for sure because the coach is using him in different positions: midfield, attack. I understand why he could not feel comfortable after six months without playing. It’s difficult to understand the coach, your team-mates and until you start playing again you don’t start playing well. He has had a great pre-season and he is helping the team a lot with his quality.

Your team-mate Marc-Andre Ter Stegen has a risky style and concedes some crazy goals. Do you feel safe with him as Barca’s keeper?
The philosophy at FC Barcelona is to start playing from the goalkeeper to the striker. He is a great goalkeeper but he also can commit mistakes, and we know that mistakes in goalkeepers seem to be more serious. We have to continue supporting and helping him because he has quality both with his feet and hands, he’s a great example to follow.

Did you have any advice for Barcelona’s most recent signing, Paco Alcacer?
Paco is a player who wants to learn. He watches everything and wants to succeed. I think he will give very good things to the team.