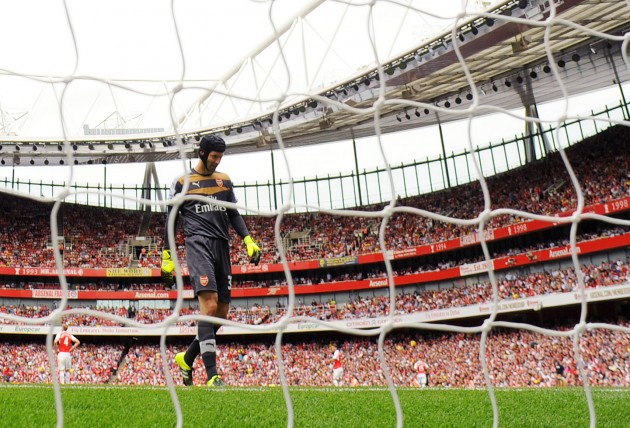 What an astonishing start to the Premier League: paradox after paradox. Not least at the Emirates where form and expectations were turned on their head.

That fact that West Ham won so comfortably, 2-0, under the new aegis of Slaven Bilic, was remarkable in itself. The Hammers came to the match on the back of stuttering performances in the ludicrous Europa League, one of Michel Platini’s various blunders, in which they really should not be competing at all. The irony of ironies, given their spate of yellow and red cards, is they had only been admitted under the fatuous Fair Play qualification rule.

Humiliated by the mere Maltese held at Upton Park, so soon to be abandoned, and beaten with a second team by modest Romanians, the auguries for the Emirates were hardly bright. Even if Bilic could now put out a full team.

But when it was seen that the team would uncluded a previously untried mere 16-year-old defender, Reece Oxford, in midfield, who would have bet on a Hammers victory? Or envisaged such a splendidly effective debut by the 6 foot 3 Oxford who coolly dominated the hugely costly Ozil and even found time to bring the ball forward.

If that was a colossal surprise so too, negatively, was the poor vulnerable form of the £10million Peter Cech in the Arsenal goal. Hailed as a phenomenal capture, prized away from Chelsea against the wishes of Jose Mourinho, at the generous behest of the owner Roman Abramovich, even John Terry, Cech’s former team-mate and admirer, declared that he could be worth 15 points of more to Arsenal.

And now? Against West Ham his two crucial blunders could be said to have cost Arsenal three vital points. One mere rotten performance to start the season on the wrong foot. He came recklessly out of goal when Hammers scored their first and was embarrassingly on the wrong foot when they got their second.
Arsene Wenger predictably refused to blame Cech and criticise his own defence and there is something to be said for such mitigation. But yet again a harsh light is focused on Arsenal’s defence just as it has been in the recent past.

It was their former left-back Nigel Winterburn who not long ago said that in training Wenger never concentrated on defence. Nor have matters improved with the elevation of Steve Bould, formerly such a stalwart centre-back himself, first to defensive coach, then to assistant manager.

Ironically, after they had beaten Chelsea 1-0 at Wembley in the meaningless Community Shield – what community? – Jose Mourinho accused the Gunners of playing defensively, relying on the break. What nonsense! Arsenal began playing counter-attacking football shortly after the change in the offside law in 1925. Indeed, I remember Cliff Bastin telling me when I was working with him on his autobiography that when his team had a lot of the play, they began to get worried. But the Gunners’ breakaway football brought Bastin himself 33 goals from the left wing in a single season.

Two seasons ago, Wenger looked lucky to keep his job let alone have his contract extended after disastrous results against Chelsea, Manchester United and Liverpool. Last season was far more successful yet an awful home performance against unfavoured Monaco did for the Gunners in the European Cup.

******************
And then of course there is there ever voluble Mourinho. Declaratory as ever after Chelsea were held to a draw at Stamford Bridge by modest but ever combative Swansea City.

There was another goalkeeping disaster, this time with Thibaut Courtois, the towering, gifted young Belgian keeper who had kept Cech on the bench, sent off after giving a penalty away. Which means that the able Asmir Begovic, who somewhat surprisingly decided to leave Stoke for a secondary role at Stamford Bridge, took over between posts and will stay there for at least the few weeks Courtois is suspended.

Ever prey to what Italians call vittimismo, declaring himself as victim, this time Mourinho decided surprisingly not to blame the referee but to criticise quite gratuitously his female doctor (not appointed by himself) for coming on to the field to treat and take off Eden Hazard in stoppage time. In fact, as another club doctor at Bolton would point out, she and her adjunct, called on by the referee, were perfectly in order with what they did.

****************
Interesting meanwhile to see the two sons of that once famed Ghana international, Abedi Pele, make their debuts in the Premier League. At Chelsea, playing up front for Swansea, Andre Ayew rolled the ball away from the formidable John Terry and scored to crown an incisive performance.

His brother Jordan, somewhat less successfully, was helping his new club Aston Villa to victory at newly promoted Bournemouth in front of all of 11,000 supporters; the little stadium can hold no more.

Bournemouth had and missed their chances, but I shall be surprised is they stay up this season though young Eddie Howe us a resourceful manager. I still remember reporting on their sensational FA Cup in at home to Manchester United all those years ago.